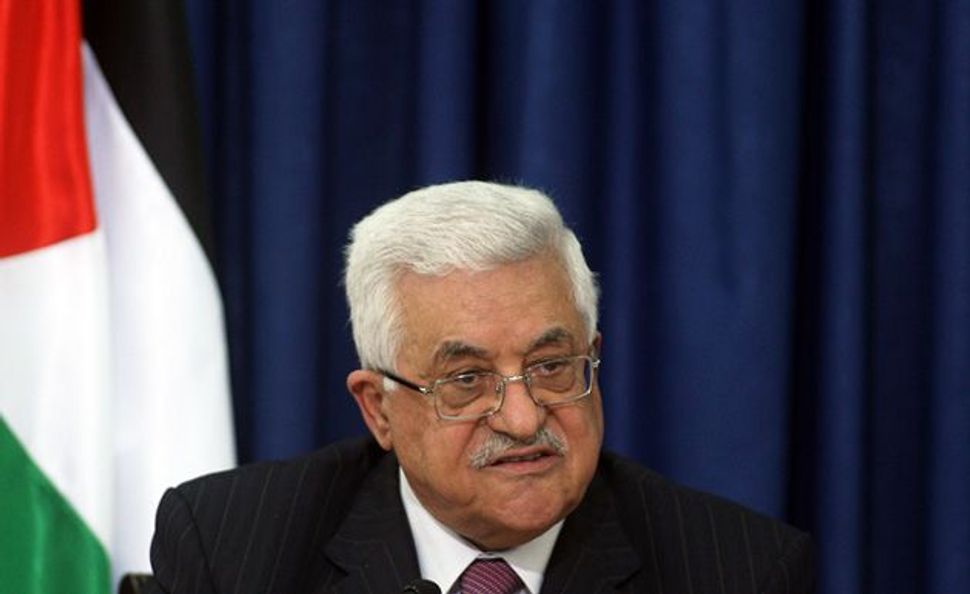 In June 2004 I visited Mahmoud Abbas in Amman. We met at the PLO’s official residence, where Abu Mazen (as Abbas is popularly known among both Palestinians and Israelis) likes to stay whenever he is in Jordan. We spent almost the entire day in conversation together.

During our meeting, we discussed efforts to revive the moribund Israeli-Palestinian peace process, which had been decimated by four years of violence that followed the outbreak of the second intifada. We also talked about his political future, since he had resigned the previous year as Palestinian prime minister.

These, needless to say, are two topics that continue to have great resonance, particularly in light of Abu Mazen’s recent announcement that he will not stand for reelection as president of the Palestinian Authority.

My relationship with Abu Mazen began in early 1993, when I supervised from afar the informal Israeli delegation to the Oslo negotiations, while he did the same for the Palestinian delegation. I did not actually meet him in person until September 13, 1993, when we both attended the signing ceremony on the White House lawn for the Declaration of Principles, more commonly referred to as the Oslo Accords.

Some time later, we began to conduct secret negotiations on possible parameters for a final-status agreement. These concluded in 1995, producing what has become known as the “Beilin-Abu Mazen agreement” (a misnomer since it was not actually a signed agreement). For me, it was a clear indication of his eagerness to move beyond interim steps and arrive at a comprehensive solution to the conflict.

Since then, we have met dozens of times. During this period, Abu Mazen has held a number of different positions in Palestinian politics. One thing, however, has remained constant: his commitment to achieving a two-state solution.

Our 2004 meeting in Amman took place at a time of uncertainty for him. Abu Mazen had resigned as Palestinian prime minister a little less than a year before. He had felt that he did not have Palestinian leader Yasser Arafat’s support on a range of domestic issues, and he was increasingly frustrated with the policies of Israeli Prime Minister Ariel Sharon.

In our conversation, Abu Mazen was relaxed, comfortable with his decision to resign after eight months in office and philosophical, as he is inclined to be. I asked him what would happen once Arafat was no longer on the scene — and I was surprised by the candor of his response.

Abu Mazen explained that at the time there were only two credible candidates to take Arafat’s place, himself and Ahmad Qurei, who had succeeded him as prime minister. He added that he believed the Palestinian leadership would prefer him over Qurei. Abu Mazen said that if he were to succeed Arafat, he would work closely with Qurei despite their many disagreements. He also said that he would agree to be president not because he wanted the job, but because it was his national duty, and that after a single term, he would pass the torch to the next generation.

This appears to be precisely what has happened. Arafat died at the end of that year. In January 2005, Abu Mazen was elected president, and Qurei served as his prime minister. Now, at the end of his first term, Abu Mazen is saying what he promised back in 2004: that he would not serve more than a single term as president. Many don’t believe him and see his recent announcement that he will not seek another term as a ploy intended to strengthen his political hand, or to force the United States to exert greater pressure on Israel.

I am inclined to take Abu Mazen at his word. Abu Mazen never much liked power, never liked being president, and he eagerly awaits the day he will leave his job.

It is also true, however, that Israel and America have something to do with Abu Mazen’s decision. We really never helped him.

One of Abu Mazen’s most difficult moments was Sharon’s decision to evacuate Gaza unilaterally rather than within the context of a bilateral agreement. Sharon failed to take advantage of the fact that in Abu Mazen there was a Palestinian president who was pragmatic, who sought a peace accord with Israel and who was the only senior Palestinian leader to dare to confront Arafat at the height of the second intifada and demand an end to violence. Sharon — who essentially believed that all Arabs are the same — was indifferent to the possibility that his unilateral action would strengthen Hamas and potentially facilitate its takeover of Gaza.

When Ehud Olmert became prime minister, he conducted negotiations with Abu Mazen in his own living room in Jerusalem, meeting him once every few weeks, without any note takers and without enjoying support from within his own Cabinet. Olmert was surprised that Abu Mazen did not fall head over heels for what the Israeli prime minister thought was a very generous peace offer. But we should remember that this offer included Israel’s annexation of Ariel, a large settlement in the heart of the West Bank, along with other bitter pills that would be difficult for any Palestinian leader to swallow.

The United States has not helped Abu Mazen either. During most of his term in office, Abu Mazen had the bad luck of having an American president in power who surrounded himself with advisers like Elliott Abrams, who did not believe in the possibility of peace. But the real disappointment probably came from President Obama, who defined the freezing of West Bank settlement construction as a condition for the renewal of Israeli-Palestinian negotiations but then caved in to Netanyahu on the issue, leaving behind Abu Mazen, who could not afford to do the same.

None of this is to say that the Palestinians did not make their own contributions to the lack of progress toward peace. Palestinian hesitancy and clumsy political conduct and, perhaps most of all, the ongoing split between the West Bank and Gaza Strip — that is, between Fatah and Hamas — have all been detrimental to peace prospects.

Now, we face the consequences of our collective failures. With Abu Mazen seemingly on his way out, it is increasingly clear that we may have missed a rare chance to reach a peace agreement. Abu Mazen may not be terribly charismatic or a great orator, but he is a responsible leader who believes that the Palestinian national interest lies in the establishment of a Palestinian state alongside Israel, with both states enjoying peaceful relations and economic cooperation with one another.

I do not believe that Abu Mazen will change his mind about not seeking reelection. If the elections don’t take place this coming January — a date Abu Mazen had proposed, but that Hamas has rejected — hopefully he will stay in his job until they do. Some of his aides, however, now suggest that he may resign in the next month. No matter what happens, the matter of who will succeed him remains uncertain.

Of all those who may present their candidacy for president, the one with the greatest chance of winning is Marwan Barghouti, who is serving five life terms in an Israeli prison. If he presents his candidacy (he would need to do that by November 25, assuming a January election) and wins, the Palestinians will have a president in jail — a pragmatic but hot-tempered man, who led the second intifada but never lost his faith in a peace agreement. Will Israel release Barghouti from jail and negotiate with him? Or will Israel’s leaders express a sigh of relief and feel justified in refusing to negotiate with someone they consider a terrorist?

For now, Israel and the United States need to take advantage of Abu Mazen’s remaining time in office. Israel should announce a freeze of all settlement construction for the next three months and begin negotiating with Abu Mazen. The Obama administration should make every effort to bring Israel and the Palestinians to the table.

Our window of opportunity is closing fast. And, I fear, it won’t be easy to open a new one.

Yossi Beilin, a former justice minister of Israel, serves as chairman of the Geneva Initiative-Israel.