Grasp the Promise of Annapolis 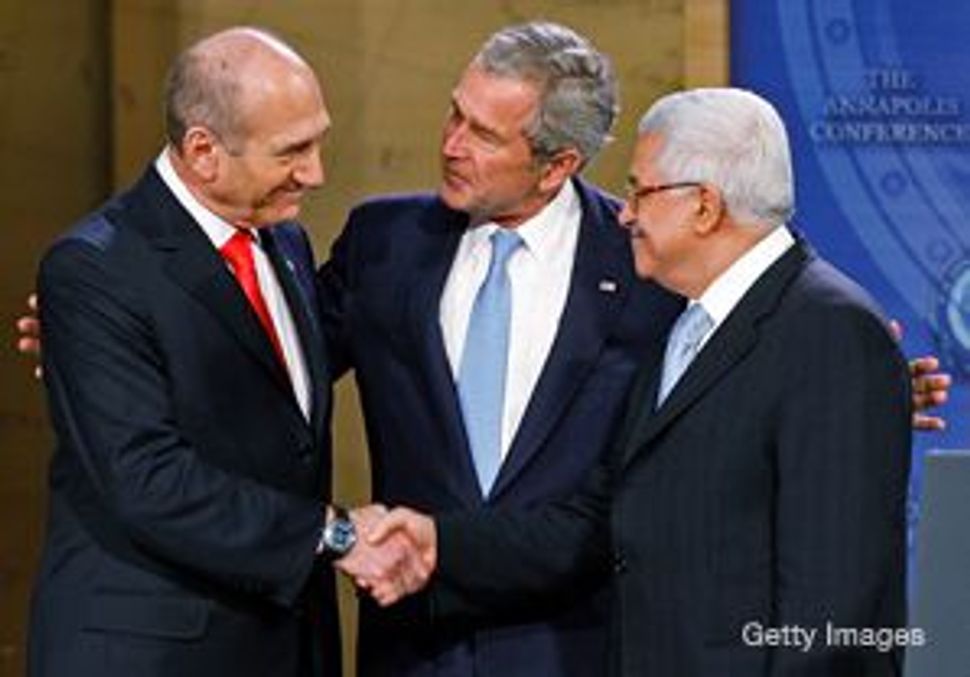 Even the most hardened of Middle East cynics could be excused for momentarily feeling a fluttering of hope after witnessing the scenes at this week’s peace conference in Annapolis, Md. 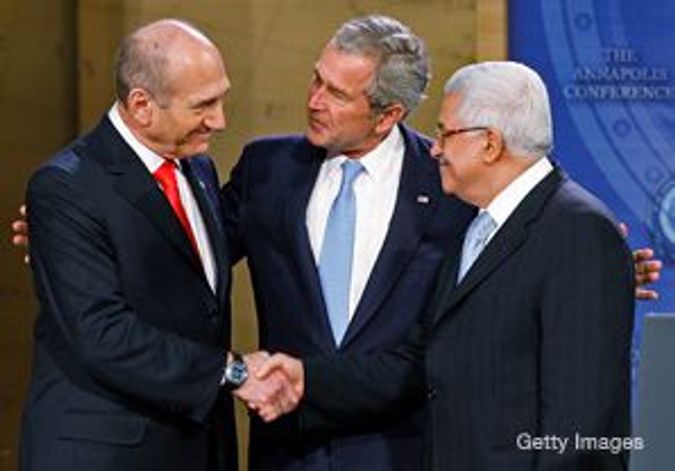 Israel’s much-maligned prime minister, Ehud Olmert, conducted himself with consumate dignity, displaying a rare capacity to combine unabashed national pride with sincere empathy for the other. Palestinian President Mahmoud Abbas, for his part, met Olmert’s outstretched hand with an unflinching commitment to a negotiated resolution of this bloody conflict and to a realization of his own nation’s aspirations that would not be at Israel’s expense. Both men have developed a degree of genuine mutual respect and appreciation, and they were on display at Annapolis.

Only President Bush came up short, sticking to a simplistic good-versus-evil narrative that was not only patronizing, divisive and lacking any resonance with the Arab world, but might very well prove counterproductive. Nonetheless, the Bush administration, and especially Secretary of State Condoleezza Rice, can allow itself a gentle pat on the back this weekend: A joint statement was achieved, the conference was well attended, the speeches were uplifting, and Bush personally committed himself to the process.

The self-congratulatory moment, though, should be a fleeting one.

This week’s peace conference assiduously avoided even a flirtation with the serious substance and content of a peace agreement. The warm words at Annapolis will be followed by pledges of hard cash at a donors’ conference scheduled for Paris in three weeks, but after that the testing ground returns to the far more hostile terrain of the Middle East.

If, several weeks from now, the negotiations are perceived to have stalled and the situation on the ground to have deteriorated or just stayed the same, then the smiling Annapolis summiteers will turn ashen-faced and their detractors back home will claim vindication. Such a scenario is all too imaginable; a return to mutual recrimination, blame games and American disengagement would be perhaps the bookmaker’s favorite.

As coincidence would have it, the Annapolis gathering fell on the same week as the 60th anniversary of the adoption by the United Nations General Assembly of Resolution 181. Separated by six decades, these events are in fact intimately and perhaps decisively linked.

Anyone who has supped at the table of Zionist history has that night and the U.N. vote indelibly etched into memory: 33 in favor, 13 against, 10 abstentions. This was the great moment of international recognition for the Zionist cause.

The rest is history: The Arabs rejected partition, brave young Israel survived a war of independence and a threatening alliance in 1967, and the country has since grown middle-aged awaiting an Arab peace partner. All national narratives tend to play fast and loose with the historical record, and ours is no exception.

So where do we find ourselves in November 2007? Sixteen Arab states, including all of Israel’s neighbors, attended the Annapolis conference. This comes five years after the Arab League adopted an initiative that holds out the prospect of recognition and normal relations for Israel with the Arab world once comprehensive peace is achieved.

Even before that, at the Madrid conference in 1991 and at the Sharm el Sheikh summit in 1996, the Arab states stood alongside Israel when the United States convened previous peacemaking efforts. Some dismiss the significance of these developments and point to the curmudgeonly refusal of the Saudis to shake hands, but as Olmert himself quipped this week, “What did you expect, tea in Riyadh tomorrow?” The Arab states have actually softened their own position by taking steps toward normalization in advance of Israel ending the occupation.

The historic success of 1947 was a territorial division whereby 55% of mandatory Palestine would become a national home for the Jewish people, while 45% would be an Arab-Palestinian state. The prospect held out by the Arab initiative and the Annapolis summit is of Arab, Palestinian and world recognition and support for an Israel on 78% of that original territory.

You do the math. The Arab world is saying yes to less than half of what it was offered — and rejected — 60 years ago.

Some may ask why we ought to be defeatist now; history, such critics have been known to argue, proves that the longer we hold out, the more we get. This approach ignores the devastating damage done to Israel’s standing in the world and to its security, as well as disregards how the country’s priorities have been skewed by the ongoing occupation and absence of internationally recognized permanent borders.

Are we really prepared to continue paying over the coming decades the human, material and moral price in order to edge the percentage of land we can call ours from 78% to, what, 80% or 81%?

Grasping the promise of the Annapolis conference and the Arab initiative means saying yes to 78% and withdrawing to the 1967 lines on the West Bank, including East Jerusalem, and on the Golan Heights. There can be reciprocal and minor modifications to those lines, such as land swaps, that would allow for incorporating the vast majority of settlers into Israel’s new and internationally recognized borders, but the basic parameters of the deal are pretty clear. Israel would be wise to seize the post-Annapolis moment, while the Arab consensus on the Saudi initiative still holds and before there is a further waning of American influence in the region.

It would be cozy and comforting if all this could be achieved in accordance with Bush’s division of the world into moderates and extremists, but that is as intellectually lazy as it is practically unachievable. The challenge to the Annapolis framework is not only the need to summon the political courage to embrace the 78% option, it is also to build a more inclusive process that creates openings for actors who will be crucial to the credibility and sustainability of any secure peace — in particular Hamas. Engaging Hamas, even indirectly, will not be easy, but Hamas, too, is inching toward an acceptance of the 1967 lines. In the context of an agreement that enjoys Arab consensus, an end of occupation and an acceptance of its own political role, Hamas’s acquiescence is far from inconceivable.

Annapolis represents Israel getting to yes with the Arab world. Now Israel and its supporters in America should declare a resounding yes to 78%. Last time I checked, we were a people who recognized a good deal when we saw one.

Daniel Levy is a senior fellow at the New America Foundation and The Century Foundation. He served in the Israeli Prime Minister’s Office under Ehud Barak and was an official negotiator at the Oslo II and Taba peace talks.

Grasp the Promise of Annapolis