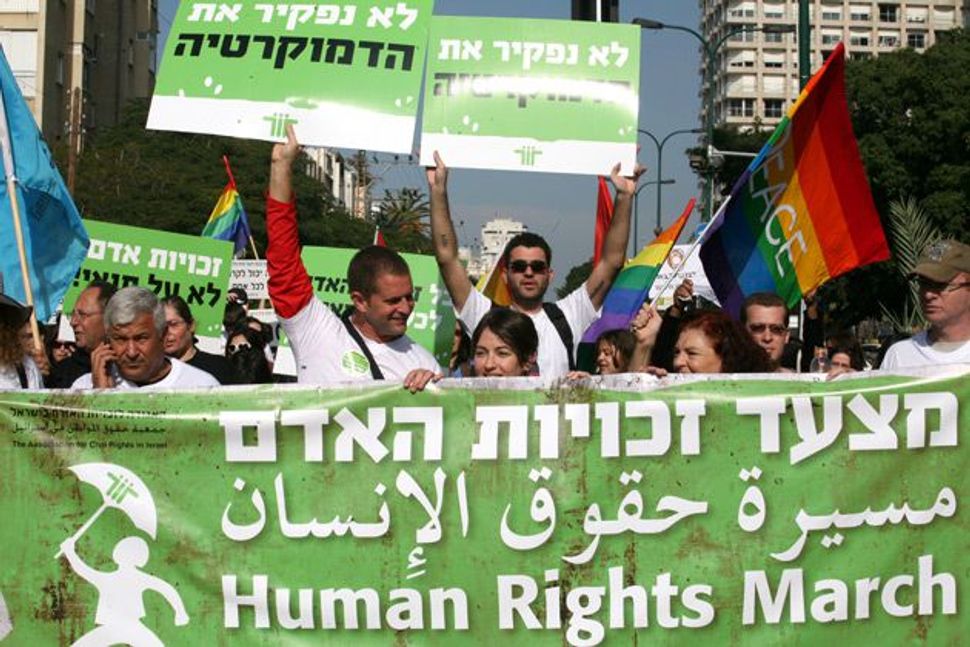 On the March: Several thousand Israelis took part in what was billed as Israel?s ?first-ever Human Rights March? in Tel Aviv on December 11. Image by KEREN MANOR/ACTIVESTILLS

No more than several thousand people took part in what was billed as Israel’s “first-ever Human Rights March.” Many of those who attended the December 11 gathering in Tel Aviv were affiliated with the several dozen Israeli NGOs that took part in organizing the event. There were gay rights supporters, protesters against the deportation of immigrants and refugees, a large contingent of Arab Israelis and even a group representing fans of a Tel Aviv soccer club.

The march’s call-to-action warned that “over this past year, the very foundations of our democracy have been shaken.” It demanded, among other things, “equal citizenship for all Israelis.”

Altogether, the event may not have seemed like much to passersby. There weren’t traffic jams, even though the march took place during the busy hours of Friday morning. Yet these thousands of marchers represent the future and the hope of the Israeli left.

There is no escaping the truth: The old Zionist left is gone. Labor is disintegrating; grassroots movements such as Peace Now are being increasingly de-legitimized, and Meretz was reduced in the most recent elections to an insignificant three Knesset seats. The controversy over the diplomatic process is heating up, and the tension between the government and the Arab minority is building, but the voice of the Israeli left is almost completely absent.

Meanwhile, it is the Likud that has become Israel’s dominant ideological and political power, in ways that Menachem Begin never could have dreamed. The personal rivalry between opposition leader Tzipi Livni and Prime Minister Benjamin Netanyahu hides the fact that Likud people are actually in control of Israel’s three largest political parties: Livni and Shaul Mofaz in Kadima; Avigdor Lieberman and Uzi Landau in Yisrael Beiteinu, and Netanyahu at the Likud’s helm. The Likud and the two parties that split from it currently hold 70 out of 120 Knesset seats, something even Mapai in the glory days of David Ben-Gurion didn’t achieve.

What enabled the right’s current success was the ideological turn it took. The last decade has seen all the right’s leaders — from Ariel Sharon and Ehud Olmert to, finally, Netanyahu — accept the left’s idea of a Palestinian state. They did so not because they suddenly abandoned the desire to hold on to the entirety of the Greater Land of Israel, nor because they realized how unjust the occupation is. The only reason leaders from the right are today willing to consider withdrawal from Hebron and even from East Jerusalem is that one argument made by the Zionist left did strike a chord with them: that a Palestinian state is the only way to keep a clear Jewish majority in Israel.

By raising the flag of “the demographic battle,” the Jewish left was able to win the debate over the West Bank and Gaza. But it did so in a way that betrayed the same values the left has always claimed to represent — humanism, equal rights and brotherhood. That’s also where the left’s political fate was sealed. When the left abandoned the hope for true partnership with the Palestinians — on both sides of the Green Line — and became almost solely defined by its focus on demography and ethnic separation, it opened the door for Lieberman and his vision of an exclusionary Jewish state.

In fact, all Lieberman did was to propose taking the left’s platform one step further: If we are to separate from the Palestinians in the name of demography, why not redraw the borders so that Israel’s Arab citizens are placed in the Palestinian state as well? Livni and Netanyahu haven’t gone this far yet, but basically they offer the public the same deal: In return for the withdrawal from the West Bank, they pledge to preserve a clear Jewish majority within the state’s borders, the implicit message being that this is an opportunity to make Israel more Jewish.

This conception naturally comes at the expense of the state’s non-Jewish minorities; it makes it clear that Israel is not their country. This has helped set the stage for the current surge of anti-Arab legislation and government measures — from the effort to ban commemorations of the Palestinian Nakba to the order to replace Arab place names on road signs. (In this xenophobic political atmosphere, it is not surprising that even providing refuge to the survivors of the genocide in Darfur became a controversial issue.)

To all this, the left could have responded by opening its ranks to Arabs and creating new coalitions with the non-Zionist parties and grassroots organizations such as those that marched in Tel Aviv. No other political coalition has the power to preserve Israel as a home not just for Jews, but for all the people living in the country. Instead, the left’s leaders and thinkers chose to engage in a contest of ethnic patriotism with the right — one that they have no hope of winning.

Right now, the Zionist left has nothing to offer the Israeli public. Its leaders — the ones who didn’t desert or retire — basically agree with Livni and Netanyahu on the nature of the problems we are facing, as well as on the solutions. Their only claim is that they will arrive at the solutions by different means. But the public doesn’t buy it: If we are in the business of building walls, Israelis think the Likud will do a better job. After all, it was the founding father of the Zionist right, Ze’ev Jabotinsky, who famously urged the Jewish national movement to take an “Iron Wall” approach to the Arab population.

The future of the Israeli left does not lie in the few seats it could win back from Kadima, but rather with the people who are waiting on the other side of the demographic wall. If the left is truly committed to protecting Israeli democracy, it can’t go on with its near-exclusively Jewish parties and arguments based on demography, because they all lead in the opposite direction. If the right is using the two-state solution for its goal of Jewish superiority within the Green Line, the left should offer an alternative model of true partnership with Israel’s Arab minority.

This will not be an easy task. The political divide between Israel’s Arab public and the Jewish left is wide. Bridging it will require some painful reconsideration of the State of Israel’s values, symbols and laws. But that may be what’s required if Israeli democracy is to be preserved, and if the Israeli left is to rise anew.