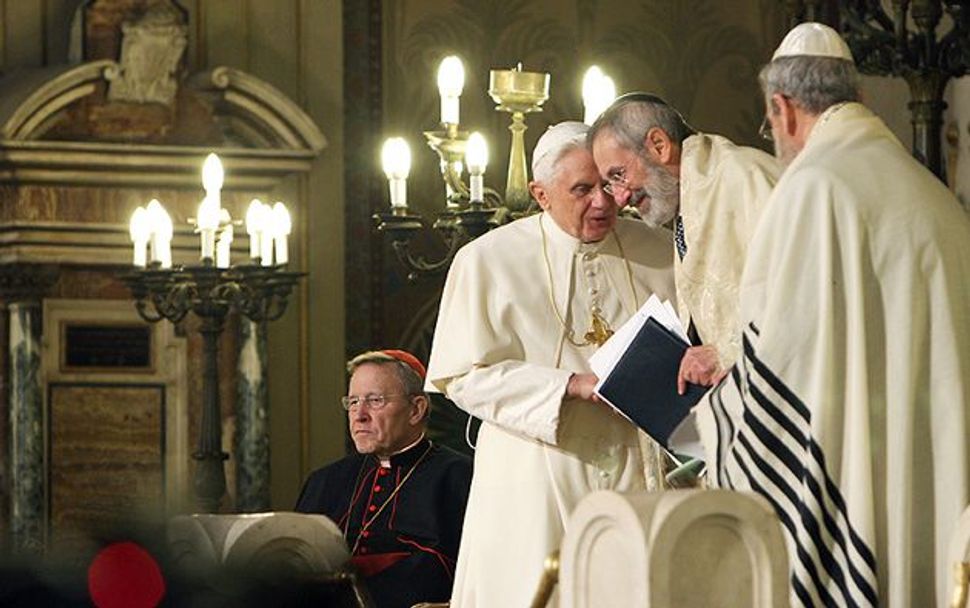 By this stage, outsiders trying to make sense of Pope Benedict XVI’s approach to Jewish-Catholic relations might be forgiven for wondering if the pontiff suffers from an undiagnosed case of schizophrenia.

After all, this is the pope who made a point of visiting a Cologne synagogue in 2005 on his first foreign trip, and Auschwitz on his second, only later to revive a controversial Good Friday prayer for the conversion of Jews. More recently, this is the pope who rehabilitated a Holocaust-denying traditionalist bishop and who announced that Pope Pius XII (whose alleged “silence” during the Holocaust remains a bone of contention between Jews and Catholics) is a step closer to sainthood, only to visit Rome’s Great Synagogue on January 17 to express his “esteem and affection” for Judaism, and to pledge that the “faces, names, tears and desperation” of Holocaust victims must never be forgotten.

So, the obvious question in many Jewish minds likely is: Will the real Benedict XVI please stand up?

However understandable that reaction may be, there is actually a hermeneutic key to Benedict’s papacy, one that lends logic to what can otherwise seem like maddening inconsistencies.

Here it is in a nutshell: Benedict’s top priority is internal, directed at the inner life of the Catholic Church. His aim is to restore a strong sense of traditional Catholic identity, in order to inoculate the church against infection by radical secularism. That’s not just a personal hobbyhorse of this pope, but rather the culmination of 50 years of mounting concern inside Catholicism that the church has gone too far in accommodating the ways and means of the secular world. Today, this wave of “evangelical Catholic” energy is the most important policy-setting force in the church.

As a result, when Benedict XVI says or does things that affect Judaism, the key is often to understand that he’s not really talking to Jews but to other Catholics.

Thus, Benedict’s decision to revive the old Latin Mass, including that infamous prayer for the conversion of Jews, was certainly not crafted as a statement about Judaism. Instead, Benedict sees the old Mass as a classic carrier of Catholic identity, an antidote to any tendency to secularize the church’s worship. Likewise, Benedict did not lift the excommunications of four traditionalist bishops, including one who believes the Nazis didn’t use gas chambers, to endorse their troubled history with antisemitism. Rather, he did so because the traditionalists act as a leaven in the church, fostering appreciation for the Catholic past — even if their ideas on some matters lie far from the pope’s own thinking.

The same point applies to Pius XII. In his own mind, Benedict is not honoring the “pope of silence,” but rather the last pope before the Second Vatican Council (1962–65), and hence a figure who represents continuity with Catholic tradition before the liberalizing currents unleashed by Vatican II.

One corollary of his concern with Catholic identity is that Benedict XVI, on his own terms, is strongly committed to good relations with Jews — as well as Muslims, and followers of other religions — because he sees them as natural allies in the struggle against secularism.

That insight helps explain what may otherwise seem an anomaly about Benedict’s January 17 speech at the Rome synagogue. This pope is, after all, an accomplished theologian, yet the doctrinal sections of the speech were largely repetitive, made up of quotations from Vatican II and John Paul II. The most original feature was instead Benedict’s notion of the Torah as the basis of a “great ethical code,” leading Jews and Christians into common efforts against forms of secularism that exclude religion from public life, and in favor of the right to life, the family, the poor, the environment and peace. That’s what Benedict means when he talks about a transition from “inter-religious” to “inter-cultural” dialogue, with the accent not on new theological breakthroughs but rather new alliances in the social, cultural and political spheres.

It will be up to Jews, of course, to decide if they wish to accept the pope’s invitation. Yet it may help to understand that Benedict’s approach, as he understands it, is anything but inconsistent. It boils down to this: Let’s each of us be ourselves internally, and let’s see what we can do together in the outside world.

That, in a sound bite, is Benedict XVI’s “Jewish policy.” It might not be everything some Jews would desire, but at this moment in Catholic history, it may well be as good as it gets.

John L. Allen Jr. is the senior correspondent for the National Catholic Reporter and author of “The Rise of Benedict XVI: The Inside Story of How the Pope Was Elected and Where He Will Take the Catholic Church” (Doubleday, 2005).