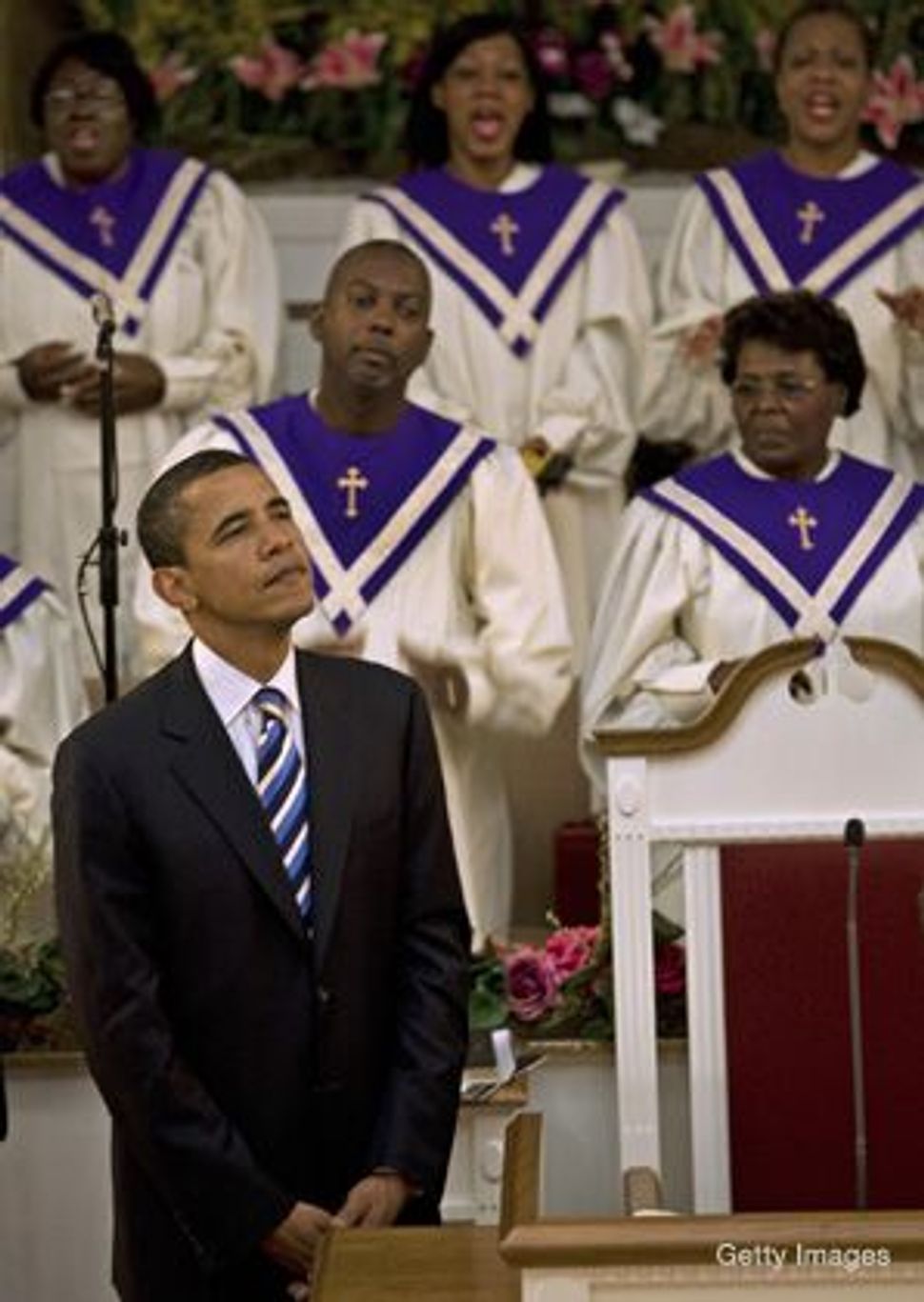 Taking It to Heart: Barack Obama has made his religious beliefs a central theme of his candidacy. 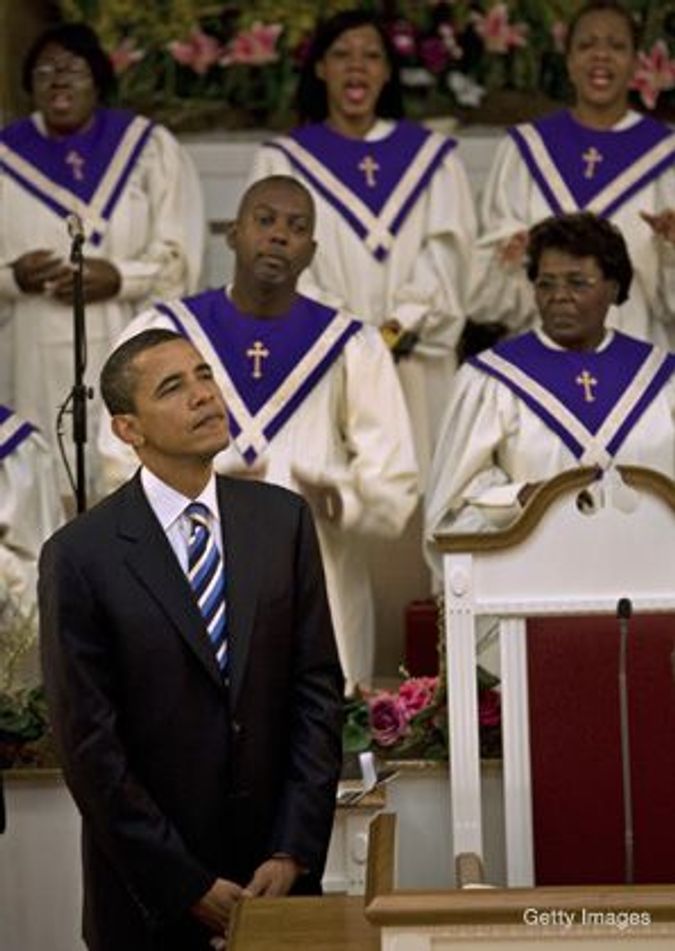 Taking It to Heart: Barack Obama has made his religious beliefs a central theme of his candidacy.

In Iowa, the two most faith-based public speakers won. Mike Huckabee is a former preacher, and Senator Barack Obama might as well be one. Both men epitomize the church-based tradition of American oratory — a rhetorical style marked not only by cadence and repetition, but by a sure-footed appeal to classically American religious values — especially the one that says we can all transform ourselves through good works. We Jews call them mitzvot.

Journalists covering Obama report that his campaign events are like “church revivals.” Attendees wait an hour or two for the senator’s arrival, and he is met not just with the zeal of rock-star groupies, but of church supplicants. Obama is seen by many Democrats as a savior for the party, and with wins in Iowa and a strong if not victorious showing in New Hampshire, that is a role he will likely have to play.

Most non-evangelical Republicans lack that kind of fervor for Huckabee, but so far he has been the only Republican candidate to have melded his biography with a finely-honed message. Watching him and listening to him, one has to admire his easy way with the English language, his ability to talk in calm tones and still be interesting — Senator Hillary Clinton could learn a thing or two from the other former Arkansas governor — and most importantly, his determination to win, against tremendous odds.

The messages of Obama and Huckabee differ in certain ways, but they bear close similarity in their regular references to God and religious imagery, and in their consistency with most religious narratives: Here is a little guy who believes in something big, fights the powers that be, afflicts the comfortable, and emerges as the people’s choice.

Ronald Reagan had that narrative, and so, to a certain extent, did Bill Clinton. Whether it’s true or not doesn’t matter. It works.

While Huckabee did not win New Hampshire — he came in a distant third, with 11% — just weeks ago he was not expected to capture more than a percentage point or two of the vote. The other Republican candidates have gotten the message: Be more like Huckabee.

That means more God-talk, more “I’m just a little guy.” Thus you have Senator John McCain running television ads talking about celebrating Christmas in captivity in Vietnam, Mitt Romney — for whom, for the sake of full disclosure, I have written speeches and OpEds in the past — giving a major speech on faith in the public square, and the thrice-married Rudy Giuliani talking during debates about his Bible-reading habits.

Anyone hoping for a rematch between Ike and Adlai Stevenson — between a manager like Romney and a braniac like Clinton or Governor Bill Richardson — is likely to be sorely disappointed. Today’s American electorate may admire business skills or sheer intellectual firepower, but most of all they love someone with a lot of heart — and increasingly that means someone who feels God is walking beside him.

This, of course, is profoundly disquieting to American Jews, most of who are highly secularized and perhaps traumatized by past encounters with religious zealotry. Even when fellow believer Joe Lieberman spoke from his heart about his religious beliefs while running for vice president in 2000, many Jewish organizations and leaders recoiled in fear. To many Jews, secularism is its own religion, with its own high priests and prophets.

But with the 2008 presidential election gearing up to be a faith-a-thon, it may be time for American Jews to feel the spirit.

Having sat through more than a handful of rabbinical sermons thinly disguised as anti-Republican screeds, I can tell you that when the target is right, Jews have no problem injecting politics into their theology.

In fact, some would argue that it is their theology. The challenge to such Jews has always been: Does theology come first? Most tend to use Isaiah or Jeremiah as a proof text for the Democratic Party platform or equate voting Republican with apostasy.

To such Jews, voting for a candidate like Obama may be troubling. He does not use religion as a convenient way to appeal to middle-of-the-road evangelicals; he actually seems to believe it. His appeal to faith is wrapped in his appeal to a better self — a self that does not punish people for being in opposition to him and does not judge people for the SUV they drive or the hunting rifle they keep in their garage. There is a reason Republicans like him.

It is, in short, the kind of faithfulness that bears little similarity to the puritanical shrillness of many secular liberals. Slightly more than seven years ago, that kind of spirit was embodied by George W. Bush; he was viewed as far more likeable and easygoing than Vice President Al Gore. Bush’s speeches were drawn from a common language of American faith; he sought to build his agenda around compassion and hope, while his opponent talked robotically of “schemes” and tried playing the brain card.

No matter what the intervening years have wrought to Bush’s image — and having served the man, I can say without hesitation that he is, in fact, deeply faithful and compassionate — the political lessons remain: Happy faithfulness works.

The Talmud teaches us, and many secularists believe, that the brain is a holy instrument, but American politics tells us that the heart is a political gift, if we use it right. That’s where today’s candidates must find their message — and where they must make sure it is received.