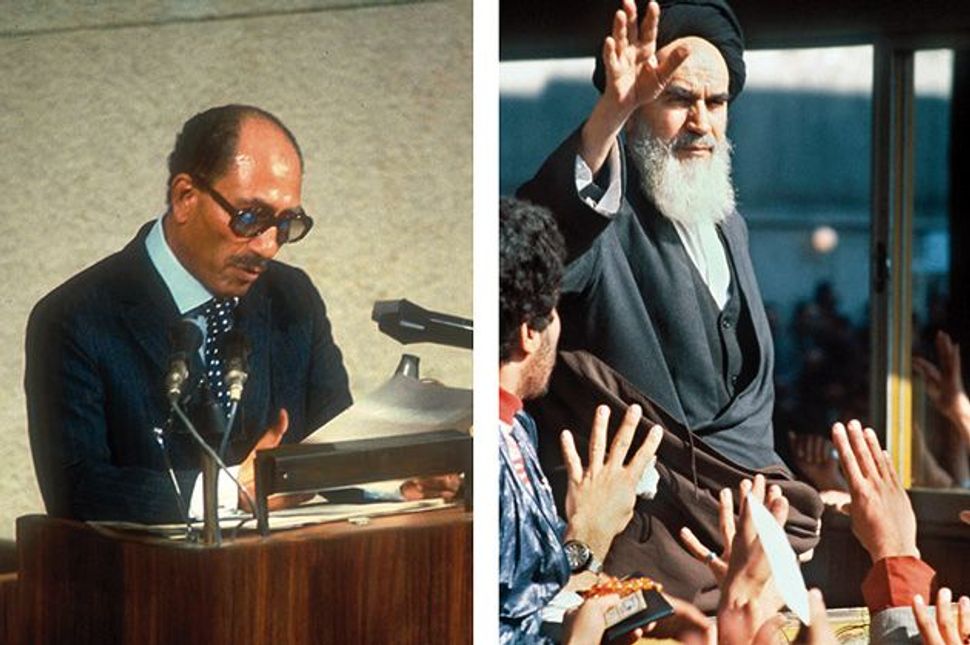 Surprise, Surprise: Who could have anticipated Anwar Sadat?s visit to Jerusalem or Ayatollah Ruhollah Khomeini?s takeover of Iran? Image by Getty Images

Earlier this month, at Israel’s annual Herzliya Conference, Ehud Barak made a sweeping but very prescient statement about events in our part of the world. Barak — whose analytical abilities are generally thought to exceed the emotional intelligence he displays as a leader and negotiator — declared: “The law of unanticipated outcomes is working overtime in the Middle East.”

Barak, Israel’s defense minister, was warning of possible violence if Israel did not get more involved in peace processes with Syria and the Palestinians. But in mentioning unanticipated outcomes, he as much as admitted that we really don’t know what will happen next in the Middle East.

Barak’s maxim rang true as we marked two painful anniversaries: the murder of former Lebanese prime minister Rafik Hariri five years ago and the revolution in Iran 31 years ago. Neither event was anticipated or predicted by the world’s best intelligence establishments. And neither were the events that followed.

Hariri’s assassination, almost certainly at the hands of Syrian or pro-Syrian elements, led, within scarcely five years, to the withdrawal of Syrian forces from Lebanon, the triumph of moderate pro-Western Lebanese politicians (celebrated at the time as a victory for the Bush administration’s regional democratization program), Israel’s war against Hezbollah and, most recently, the return of Syrian influence, which was just praised effusively by none other than the son of the murdered Lebanese leader. The crustiest old Lebanon hands could only shake their heads in dismay at this latest turn of events.

Meanwhile, the anniversary of Iran’s revolution was observed in Tehran on February 11 not only by Iran’s Islamist regime but also by the forces of political opposition, whose emergence after Iran’s elections half a year ago no one predicted either.

As an intelligence analyst in the late 1970s and early 1980s, I experienced Iran’s revolution as a numbing intelligence failure. I recall working day and night to keep up with events as the Shah’s regime crumbled and as Ayatollah Ruhollah Khomeini’s revolutionary plan gradually unfolded. I congratulated myself if I could accurately explain to Israel’s leaders and to friendly intelligence services what had happened that day — but not, to be sure, predict the events of tomorrow.

A slightly earlier and less traumatic, because happy, intelligence failure was the inability to predict Anwar Sadat’s dramatic initiative in coming to Jerusalem, visiting the Knesset and launching a peace process. I remember complaining that if I had known about the high-level Israeli-Egyptian contacts in Morocco that preceded the Egyptian president’s historic announcement of November 9, 1977, I might have had a chance of foreseeing what was about to unfold. But intelligence analysts are notoriously compartmentalized from information about what “our forces” are doing. Anyway, nobody holds you to account for missing good news.

The events leading to the Six Day War of 1967, the outbreak of the Yom Kippur War of 1973 and the Iran-Iraq War in 1980, the first and second intifadas, Saddam Hussein’s invasion of Kuwait in 1990, the Rabin assassination in 1995, even the vicissitudes of oil price increases and drops — the list of unanticipated events and decisions that have changed the course of Middle East history is endless and depressing.

One of the problems of trying to anticipate such events is that we quite naturally relate only to what we are aware of: We look for the penny under the lamppost. Today, for example, we anticipate the possible nuclearization of the Middle East and expect another Lebanon war. There may be bad news there, but there will be no great surprises if these things come to pass. Yet in no way can we account in advance for human whim or miscalculation, which both play an outsized role in a region where individual leadership decisions can be decisive.

Some invisible hand is obviously shuffling the deck. We rarely know what cards we are going to be dealt.

Yossi Alpher is former director of the Jaffee Center for Strategic Studies at Tel Aviv University. He currently co-edits the bitterlemons family of Internet publications.