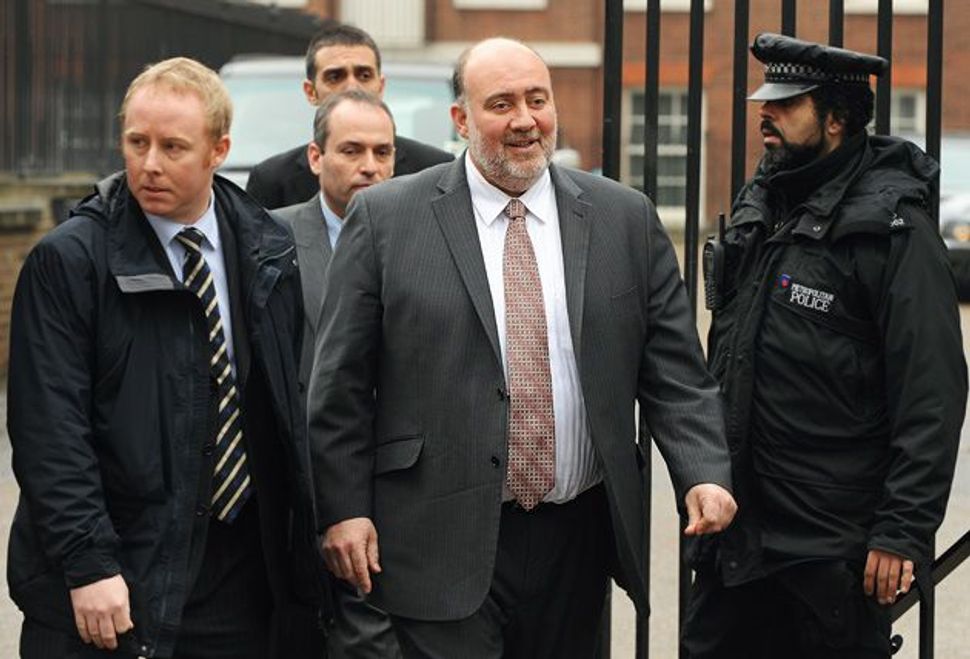 London Calling: Israel?s ambassador in London, Ron Prosor (center), leaves a February 18 meeting at the British Foreign Ministry after being sum- moned to talks regarding the use of forged British passports by the alleged assassins of a Hamas commander in a Dubai hotel. Image by Getty Images

It has become conventional wisdom that Israel cannot get a fair hearing in Britain. There is strong hostility toward Israel in British academia and trade unions. There have been mounting efforts by pro-Palestinian activists to push boycotts, divestment and sanctions efforts against the Jewish state. And British public opinion as a whole reacted strongly against last winter’s Israeli military campaign against Hamas in Gaza.

Against this backdrop, the revelation that the killers of Hamas commander Mahmoud al-Mabhouh in Dubai had used forged British passports (as well as fake passports from several other countries) was widely expected to send British-Israeli relations into a tailspin. If the killers were indeed Mossad operatives, commentators across the political spectrum argued, Britain would be within its rights to recall its ambassador and to take other punitive diplomatic measures against Israel.

Instead, Britain reacted with remarkable restraint. Indeed, rather than exposing the fault lines of the Anglo-Israeli relationship, the Dubai issue actually shows just how sympathetic the current Labour government is to the Jewish state and its war on terror, to an extent rarely appreciated even by Britain’s Jewish community.

The passports controversy began February 16, when it emerged that six — then 12 — of the individuals who allegedly participated in the operation against Mabhouh were carrying forged British passports that used the names of real British nationals living in Israel.

The British initially seemed to take a strong line, with Prime Minister Gordon Brown promising a “full investigation” and the Israeli ambassador in London, Ron Prosor, being summoned to the Foreign Office. Prosor’s meeting, however, lasted just 20 minutes — hardly long enough for a proper telling-off.

A pre-scheduled February 22 meeting between British Foreign Secretary David Miliband and Israeli Foreign Minister Avigdor Lieberman in Brussels also does not seem to have produced serious sparks. Commentators had wondered whether the aggressive Lieberman was going to provoke Miliband into taking a firm stance, but the foreign secretary made do with a routine request for Israel to cooperate with an investigation.

Any remaining doubt that Miliband was doing anything other than simply going through the motions was removed when he later agreed to be guest of honor at a party at the Israeli embassy later this month, hosted by the Israeli ambassador. So much for British “outrage.”

What a contrast with 1987, when it emerged that Mossad assassins were using forged British passports. Prime Minister Margaret Thatcher — who was considered a strong ally of Israel — forced the Mossad to stop operating from London, and the Israeli government was made to promise that the forgeries would stop.

One explanation for the British government’s relative restraint is realpolitik. The British, eager to remain players on the world stage, know that a serious blow-up with Israel will disqualify them from involvement with the peace process. The Israelis have exploited this fear before. Just last month, Deputy Foreign Minister Danny Ayalon used this very threat to prod the British to change a law that leaves visiting foreign officials vulnerable to arrest and prosecution in Britain for alleged war crimes (a law that became popularly known as the “Livni Law” after a British court in December issued an arrest warrant for Kadima leader Tzipi Livni over her role in Israel’s Operation Cast Lead, forcing her to cancel a trip to Britain).

More fundamentally, the British government is broadly sympathetic to Israel. The governing Labour Party’s elite today consists of the group of moderates who fought, during the 1990s, to “modernize” the party, which had previously been dominated by its left wing and was thus considered unelectable. A major battlefield was Middle East policy; the modernizers fought to rid the party leadership of the fierce hostility to Israel that characterized (and continues to characterize) Labour’s activist grassroots.

Of today’s senior government ministers, all but two — Justice Minister Jack Straw and Communities Minister John Denham — are regarded as friends of Israel. The prime minister has often talked about the love of Israel he inherited from his father, a Presbyterian minister. Even Miliband, the Jewish foreign secretary, who is sometimes treated with suspicion by supporters of Israel, is at “worst” pro-Israel in the J Street tradition.

Of course, all of this does not mean British-Israeli relations are always smooth. The main issue of contention in recent months, for example, has been Britain’s failure to change the so-called Livni Law. But this was held up directly by Straw, who is responsible for the legal system, and this issue has been a genuine embarrassment to the government.

Meanwhile, under the surface, the two countries are bound by shared strategic concerns.

Britain has been deeply concerned over Iran’s nuclear program, with the Brown government pushing hard for sanctions. Israeli and British intelligence agencies cooperate closely, sharing their Iranian-related data and analysis. (There has even been speculation in the British press — strenuously denied by the government — that, as a courtesy, Israel warned Britain’s foreign intelligence service, MI6, in advance of the assassination of Mabhouh, who was believed to be involved in smuggling weapons from Iran to Hamas.)

On the military front, the former commander of the British forces in Afghanistan, Richard Kemp, has revealed that the British military’s doctrine for dealing with suicide attacks is directly copied from Israel’s. There is also information exchanged between the two countries over other counter-terrorism issues.

Scuttling these relationships to make a point about the Mabhouh assassination — as some British commentators have urged — would be a disaster for Britain. Moreover, the very existence of these ties indicates an important truth: Those in power in Britain accept the nature of the modern war on terror, and that applies to tactics employed by Israel as well.

If London is being curiously quiet over the Mabhouh assassination, perhaps it is because, ultimately, many in the British government realize that it was necessary.