On the Egypt-Israel Border, a Modern Exodus 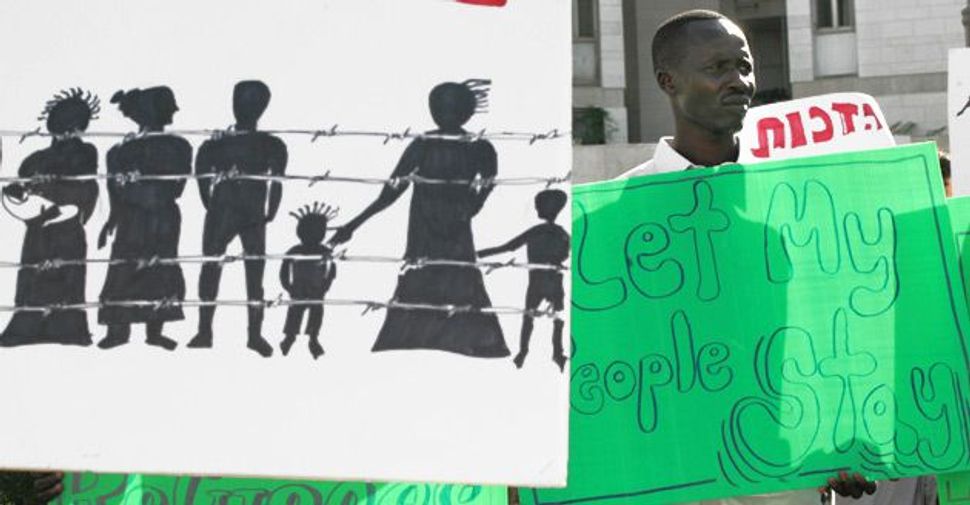 Let My People Stay?: Sudanese protesters held signs outside the Israeli prime minister?s residence in Jerusalem in 2007 demanding that individuals fleeing Darfur be allowed to stay in Israel. Image by Getty Images

Last month, as Jews around the world prepared for Passover, Egyptian border guards were killing migrants trying to cross into Israel. How many of us, as we sat at our Seder tables, were even aware of the dramatic parallel to the Passover story taking place on the present-day Egyptian-Israeli border?

Most of those trying to cross from Egypt into Israel are from Eritrea and the Darfur region of Sudan. The hardships faced by many in Darfur and in Eritrea are as horrific as slavery, or even worse. Ethnic and political violence in Darfur has resulted in the deaths of, by some estimates, 200,000 people and displaced several million others. In Eritrea, the government brutally represses dissent and imposes mandatory, indefinite military service that a recent Human Rights Watch report succinctly summarized with the title “Service for Life.” The spirit of Pharaoh lives on.

Just as the fleeing Israelites were chased by Pharaoh’s army, Eritreans and Darfuris who are today trying to escape the situations that enslave them are sometimes violently pursued. On March 29, Egyptian border guards shot dead an Eritrean migrant and wounded two others as they tried to cross from the Sinai into Israel. Egyptian security sources told Reuters that Egyptian police had shot dead two African migrants, wounded five others and arrested three more at the same border two days earlier. In response to criticism over the fatal shootings, Egypt’s Ministry of Foreign Affairs stated that “the number of deaths in these incidents did not exceed 2% in 2008 and 4% in 2009 of the total number of migrants attempting to cross.” Since when is shooting and killing four out of every 100 people seeking freedom considered acceptable?

Those arrested trying to cross the border are at risk of being returned to places such as Eritrea or Sudan, where they face torture or other forms of persecution. In December 2008 and January 2009, Egypt forcibly returned more than 45 Eritrean asylum seekers to Eritrea, where they faced detention and the risk of torture. The Egyptian authorities did so without first assessing the Eritreans’ protection needs or providing them with the opportunity to make asylum claims.

In the meantime, Prime Minister Benjamin Netanyahu of Israel earlier this year proclaimed his plan to build a fence along the Egyptian border to keep out “infiltrators,” many of whom are asylum seekers from Sudan and Eritrea. While Israel has legitimate security concerns regarding stopping infiltrators seeking to do it harm, Haaretz quoted Netanyahu expressing the much broader concern that “the infiltrators cause cultural, social and economic damage and drag us into the Third World.”

In addition, a government-sponsored bill that has already had its first reading in the Knesset would affirm the so-called “hot returns” policy of detaining and quickly expelling to Egypt asylum seekers who succeed in crossing the border. Israel forcibly returned 217 people to Egypt between January and August of last year alone, according to an official court filing.

Borders, by definition, have two sides. And human rights obligations adhere on both. The Universal Declaration of Human Rights enshrines the principle that everyone has the right “to seek and to enjoy in other countries asylum from persecution,” and the Refugee Convention’s prohibition on forced refugee returns “in any manner whatsoever” is interpreted to bar expulsions at borders that would result in refugees being returned to places where their lives or freedom would either directly or indirectly be threatened.

Of course, Sudan and Eritrea bear ultimate responsibility for persecuting their citizens. But Egypt must also be held accountable for violating minimal human rights standards when its border forces shoot migrants or when it forcibly returns refugees to countries where they face persecution. And Israel should be held to account when it fails to meet its responsibilities by prohibiting entry at its border to people fleeing persecution. To engage in “hot returns” that fail to examine the pleas of such asylum seekers is not only to forget what it was like to be slaves in Egypt, but also what it might have been like to be trudging through the Sea of Reeds, anxious and fearful that the escape might fail and all would be lost.

Kathleen Peratis, a partner at the New York law firm Outten & Golden, is a board member emerita of Human Rights Watch.

On the Egypt-Israel Border, a Modern Exodus