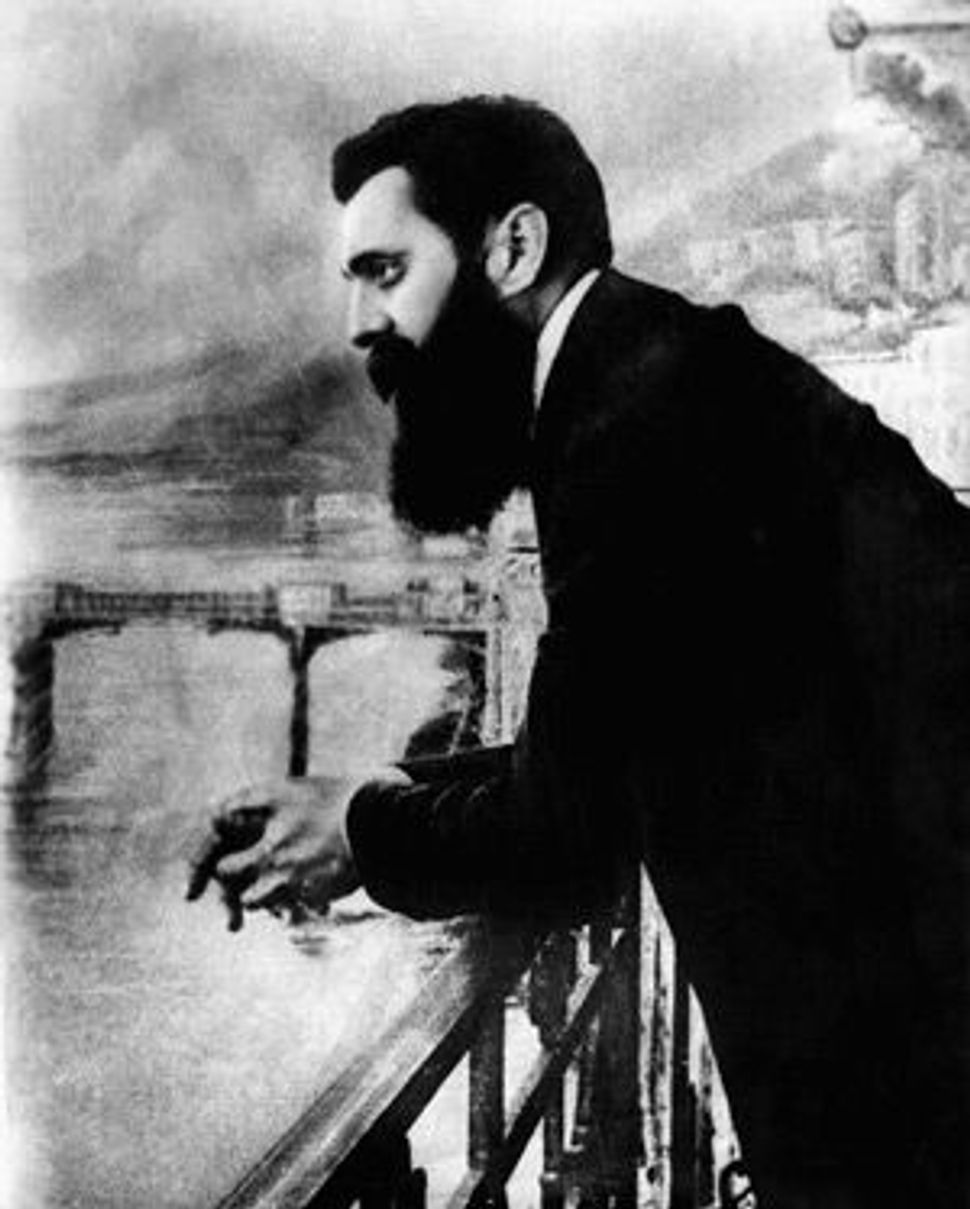 He Willed It: Theodor Herzl gazes over a hotel balcony during the First Zionist Congress in Basel, Switzerland. Image by Getty Images

It is easy to mock Theodor Herzl and his vision of orchestras playing Viennese waltzes aboard ocean liners carrying Jewish immigrants to the Promised Land. After all, the father of modern Zionism failed to anticipate the rise of Arab nationalism, and the model Jewish state that he imagined in his utopian novel “Altneuland” (Old-New Land) hardly resembles today’s conflict-ridden Israel. 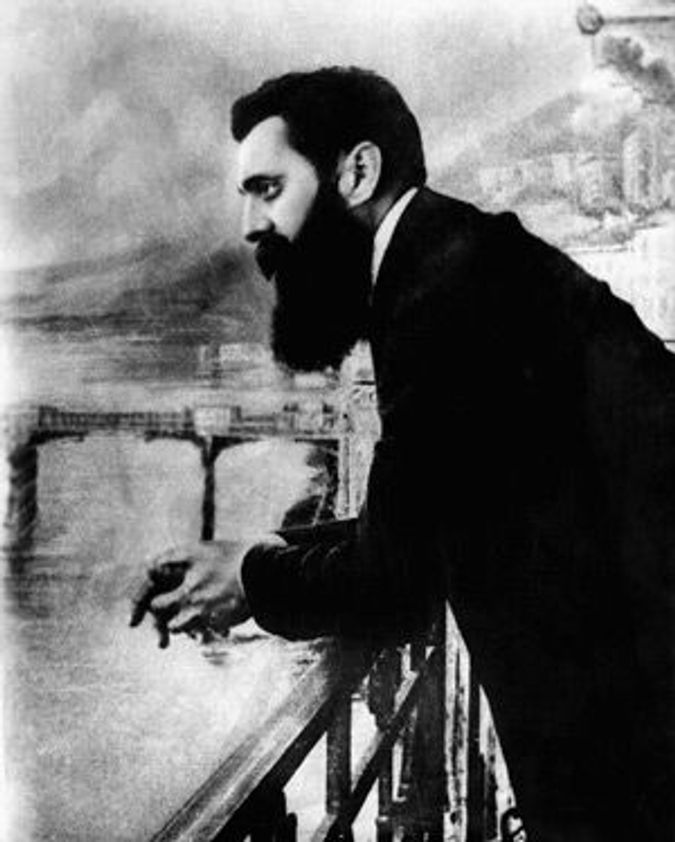 He Willed It: Theodor Herzl gazes over a hotel balcony during the First Zionist Congress in Basel, Switzerland. Image by Getty Images

Yet Herzl’s ideas are anything but archaic. Even as we mark the 150th anniversary of Herzl’s birth, his vision of a Jewish state still seems — Viennese waltzes notwithstanding — surprisingly modern. It is a vision that has informed what is best about today’s Israel, and that should serve as an inspiration as the Jewish state charts its future.

Of course, even before Herzl, there had been expressions of the desire to return to Zion, but these were mainly the domain of religious Jews. Indeed, world Jewry in the late 19th century was riven by ethnic, geographic, political and religious divisions. There were assimilationists and traditionalists, Western religious reformers and Eastern European socialists, Ashkenazim and Sephardim — all pulling in different directions. The non-Orthodox movements of Western and Central Europe did not speak to the traditional and Orthodox Jews of Eastern Europe, North Africa and the Middle East. And by its own self-definition, the powerful Bundist movement, which emphasized Yiddish as the main manifestation of a Jewish cultural nationality, did not apply to non-Yiddish-speaking Jews.

Amid this cacophony, Herzl declared emphatically that the Jews were a people. Today, this may seem like a banal statement, but at the time, his insistence that the sophisticated Jews of Berlin shared a common destiny with the tribal Jews of Yemen was nothing less than revolutionary.

Herzl, however, was not content with mere declarations. One of his main achievements was developing the institutions of a worldwide national Jewish movement — annual congresses, an executive committee and financial arms. These were democratically governed, with men and women participating in electing representatives. (Herzl gave women voting rights in 1897, when no European country permitted women’s suffrage in national elections.)

As Hebrew University historian Alexander Yakobson has noted, the Zionist idea was, from its very inception, a multicultural one. The First Zionist Congress, which opened in 1897 in Basel, Switzerland, was a great multiethnic, multilingual spectacle — unique in Jewish history. Beside Max Nordau, Herzl’s atheistic deputy, sat bearded Orthodox rabbis. Nordic faces mingled with Middle Eastern visages. Different tongues could be heard in the corridors, while in the plenum a German of sorts — dubbed “Congress Deutsch” — was the language of business. There were men and women, Jews and non-Jews, Orthodox and reformed rabbis, and even frocked ministers; the founder of the International Red Cross rubbed shoulders with pioneers from the first Jewish agricultural settlements in Palestine.

When the Second Zionist Congress opened in 1898, pieces of Wagner’s “Tannhäuser” were played in tribute to Herzl’s fascination with the opera. In their quarters, Eastern European delegates sang the Yiddish songs they knew from their shtetl days. This was a taste of things to come — a portent of present-day Israel, with its diverse components. Herzl himself was well aware of the multiethnic nature of the Jewish people. As he wrote in an 1895 diary entry: “we are a historical entity, a nation made up of diverse anthropological elements. This also suffices for the Jewish state. No nation has uniformity of race.”

Herzl did not speak of a single, uniform, all-encompassing identity for Jews, instead advocating a composite, multi-faceted one. In “Altneuland,” the Jewish state is made up of individuals with varied identities, and sometimes clashing visions. In the end, however, the political faction that emerges triumphant is a liberal, Western-oriented party that supports granting equal rights to all — Jews and non-Jews alike.

Herzl also affirmed the enduring reality of the Jewish Diaspora. To him, Jews were not necessarily all potential olim; those who did not wish to immigrate to Zion would remain in their host countries, full participants in the surrounding non-Jewish societies in which they live, but more secure for also having a nation-state of their own.

Yet the Jewish state, as it exists in “Altneuland,” is not, as political theorist Shlomo Avineri has pointed out, a secular society: It rests on the pillars of Jewish tradition. An entire chapter of the book is dedicated to a traditional Seder, replete with quotes from the Haggadah in Hebrew (as well as the presence of a Franciscan monk and a Russian priest as guests). Emigration from Europe to Zion is equated with the Exodus of the ancient Israelites from the Egyptian house of bondage.

Herzl’s unique vision — simultaneously grounded in Jewish tradition and looking outward to engage with the wider world — finds perhaps its most striking expression in the two edifices he imagines co-existing in the Jerusalem of “Altneuland.” The first is the Palace of Peace, which celebrates universal values of peace, knowledge and equality under a Latin inscription stating that “nothing human is alien to me.” This palace is a harbinger of both the United Nations General Assembly and the International Court of Justice. The second structure is a rebuilt Jewish Temple. Joining the Church of the Holy Sepulchre and the Dome of the Rock (not replacing it), this reconstruction of King Solomon’s Temple is actually a grand synagogue. Its separate gallery for women reflects Orthodox practice, yet music is played there on Friday nights.

This is Herzl’s Judaism: an inclusive religious tradition separated from the state, imbued with Western liberal values and combining the old with the new — offering inspiration, once again, to the world. Herzl imagines a Friday night in Jerusalem as follows: “throngs of worshippers made their way to the Temple and to the many synagogues…. there to pray to the God whose banner Israel had borne throughout the world for thousands of years.”

Needless to say, history did not entirely follow Herzl’s road map. Israel, from the moment of its creation, has not had one day of the peace that Herzl foresaw. (Contrary to Herzl’s expectation, our Arab neighbors have not appreciated the economic advantages that the Jewish state brought to the region.) And it is an understatement to say that the liberal ideas espoused in Herzl’s “The Jewish State” and “Altneuland” have not always emerged victorious in Israel. Nor, of course, have Israel’s rabbis confined themselves to their synagogues (though neither is Israel a theocratic state of the sort that Herzl feared).

Still, Herzl’s dream of a multi-cultural Jewish people, living in its ancestral homeland and sharing a democratic state — flawed as it may be — has indeed become reality. That alone is cause for celebration. And while other aspects of his dream have yet to be achieved, it’s important to keep in mind that Herzl was ahead of his time — and, in many respects, of ours as well.

Amnon Rubinstein, a law professor at the Interdisciplinary Center Herzliya, has served at various points as Israel’s minister for education, science, energy and communications and was awarded the 2006 Israel Prize for law. He is the author of “From Herzl to Rabin: The Changing Image of Zionism” (Holmes & Meier, 2000) and the co-author, with Alexander Yakobson, of “Israel and the Family of Nations: The Jewish Nation-State and Human Rights” (Routledge, 2008).