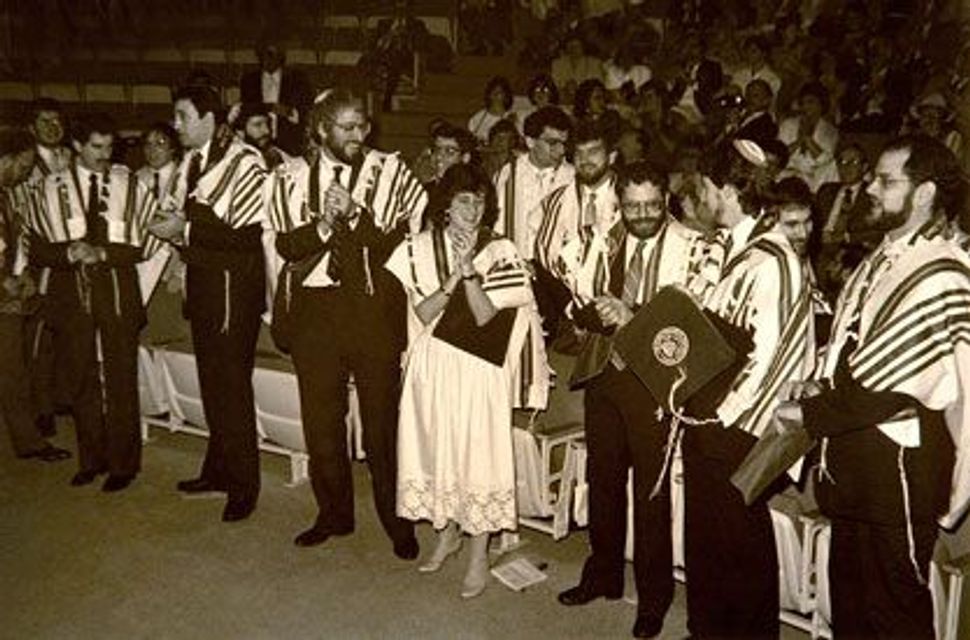 First of Many: Rabbi Amy Eilberg, the Conservative movement?s first woman rabbi, rejoiced with other newly ordained rabbis at the Jewish Theological Seminary on May 14, 1985. Image by joyce culver/joyceculver.com

Twenty-five years ago, when I received my rabbinic ordination from the Jewish Theological Seminary, I was well aware of the historic nature of the occasion. On May 14, 1985, I became the first woman ordained in the Conservative movement, but I also knew that the path leading to this milestone was paved by many people. 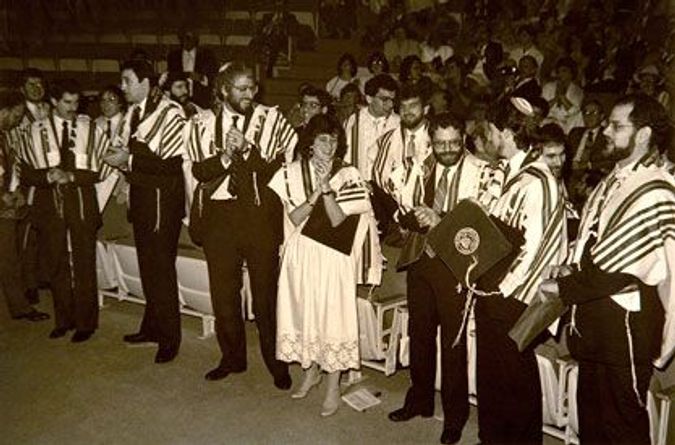 First of Many: Rabbi Amy Eilberg, the Conservative movement?s first woman rabbi, rejoiced with other newly ordained rabbis at the Jewish Theological Seminary on May 14, 1985. Image by joyce culver/joyceculver.com

The very first woman rabbi, Regina Jonas, of blessed memory, was ordained in Berlin in 1935, and later died in Auschwitz. Rabbi Sally Priesand was ordained by the Reform movement’s Hebrew Union College in 1972 and Rabbi Sandy Eisenberg Sasso by the Reconstructionist Rabbinical College in 1974.

Within the Conservative movement itself, the demands for women’s equality were presented by the Ezrat Nashim group in 1972. That same year, Susannah Heschel asked the Jewish Theological Seminary in New York to consider her application to its rabbinical school, knowing that such an application would not be accepted.

I entered this story late, in 1972, when my college rabbi and mentor, Rabbi Al Axelrad, took me out to lunch to urge me to become a rabbi. What he was suggesting was crazy. As he well knew, the Conservative movement was nowhere near ready to consider ordaining women, but he had planted a seed in me. Even in 1976, when I began my graduate studies in Talmud at JTS, hardly anyone was talking about the ordination of women, certainly not in public. Those of us women who davened in tallit and tefillin did so in the privacy of our own rooms.

A grass-roots campaign gradually emerged. Students, lay leaders and Conservative rabbis began to challenge the movement, asserting that it must guarantee full equality to Jewish women if it was to be true to its own reason for being — upholding Jewish tradition while attending to the changing circumstances in which the Jewish people lives. After years of dedicated work on the part of many people, the JTS faculty voted in 1983 to open the doors of its rabbinical school to women.

Nineteen women entered the rabbinical school at JTS in the fall of 1984. Several of us had already spent years in graduate school preparing for this opportunity, and others were lucky enough to have come of age just in time to serve in the Conservative movement’s first generation of women rabbis.

While many were thrilled at this historic step, some male students at the time had mixed feelings, and some beloved faculty members were alienated by the decision or by the process through which it had been made. Still, it became clear that the presence of women as fully enfranchised students broadened the scope of questions asked in classrooms and transformed the culture of the seminary community. Without question, the entry of women into the JTS rabbinical school was a transformative moment for the movement.

In the ensuing 25 years, the ranks of women rabbis in the Conservative movement’s Rabbinical Assembly have swelled, to more than 250 today — including the R.A.’s current executive vice-president and incoming president, both historic firsts. Conservative women rabbis have contributed in countless ways: We have fashioned new rituals for moments unique to a woman’s lifecycle and created feminist theology and textual interpretation. We have been pioneers in areas such as chaplaincy, healing, social justice and peace-making work. We have taught Torah, comforted the bereaved, welcomed Jews-by-choice and labored at the sacred work of building community.

At times, we have simply been “rabbis.” At other times, we have brought to our work particular gifts and sensibilities as Jewish women, helping to broaden the minds and open the hearts of the people we had the privilege to serve, contributing to our people’s dialogue with Torah and with God.

Surely, many challenges remain. The so-called “stained-glass ceiling” remains firmly in place, although a handful of women have been called to lead large congregations as solo rabbis. The R.A.’s comprehensive 2004 study, “Gender Variation in the Careers of Conservative Rabbis,” demonstrated that women rabbis continue to suffer significant discrimination in the workplace, including lower pay, challenges to their authority and legitimacy, and the usual flow of disrespectful and foolish remarks.

Still, as I ponder the 25 years since my ordination at JTS, I am awed that we have collectively come as far as we have. For younger Conservative Jews, the denial of full equality to women is now inconceivable. Even the Orthodox world is actively wrestling with the question of women’s ordination.

Anniversaries invite sacred reflection. On this 25th anniversary of my ordination, I am deeply grateful for the joy and privilege of participating in this transformative time in Jewish history. My heart is drawn to the Shehecheyanu prayer, in which we thank God for giving us life and enabling us to reach this special moment.

I am drawn back to one of my most precious memories from the day of my ordination. After extended discussion, it had been decided to include the Shehecheyanu blessing in the new prayer service celebrating the ordination of the graduating seniors. At the close of that ceremony, a dear colleague, newly ordained Rabbi Leonard Gordon, approached me and said in a heartfelt way, “I know why I said the Shehecheyanu today. I said it for you.” Actually, he said it for all of us, for all the women and men who believe in dignity and equality for all Jews, for the ongoing vibrancy of Conservative Judaism and for the Jewish people. Like him, I am grateful.