What the Baal Shem Tov Left Behind 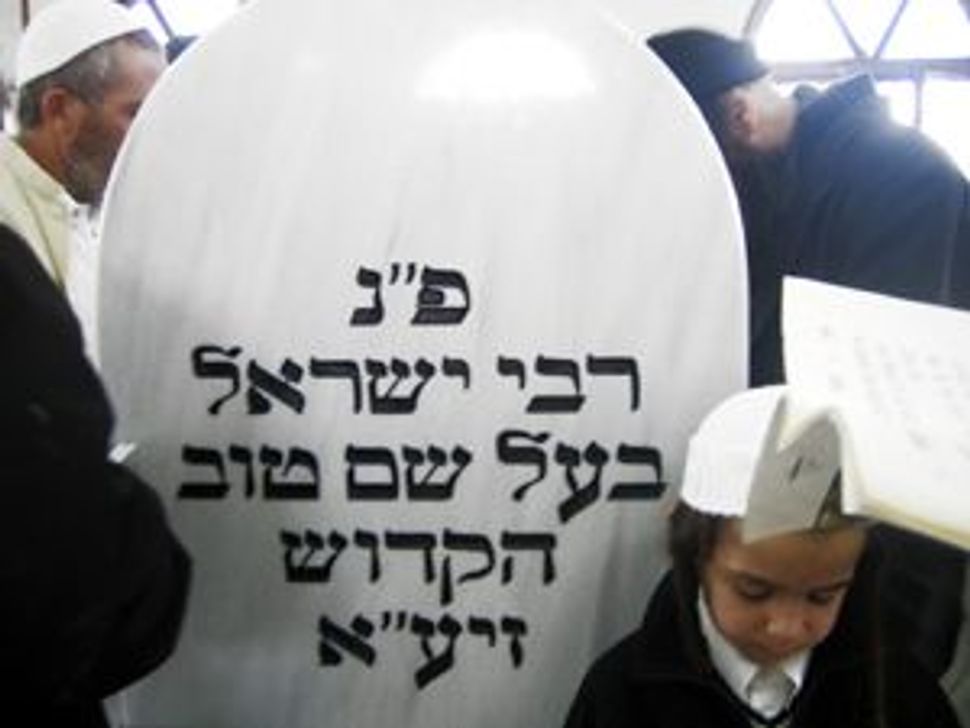 Besht at Rest: Pilgrims pray at the tomb of the Baal Shem Tov in Medzhibozh, Ukraine in 2007. Image by Shlomo Enkin lEwiS

The yahrzeit of a Hasidic rebbe — far from being a day devoted to mourning the dead — is a bona fide yontef. It is marked by feasting, singing and dancing, testifying to the supreme confidence of Hasidim that their departed leader is still actively interceding on their behalf in the heavens. 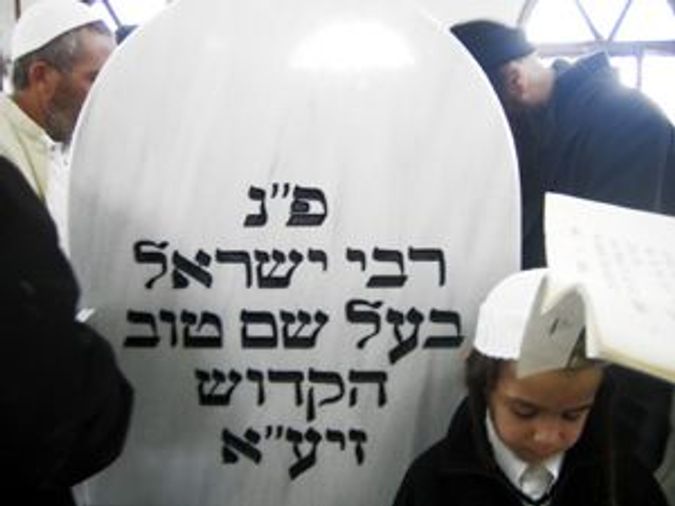 Besht at Rest: Pilgrims pray at the tomb of the Baal Shem Tov in Medzhibozh, Ukraine in 2007. Image by Shlomo Enkin lEwiS

This month, on Shavuot, we mark the 250th yahrzeit of Hasidism’s putative founder, Rabbi Israel ben Eliezer, better known as the Baal Shem Tov (“Master of the Divine Name”), or the Besht. On this anniversary, there is indeed much to celebrate.

Just over a half-century ago, in wake of the total destruction of every center of Hasidic life in Europe, it seemed almost certain that the religious revivalist movement the Besht originated in 18th-century Poland was headed for utter extinction. Instead, Hasidism is now the Jewish world’s fastest-growing and, I would argue, its most religiously vibrant movement.

This resilience is all the more remarkable given that from its very beginnings, the Hasidic movement has been relentlessly harassed and hounded, by both Jewish and secular authorities. The Hasidim came under attack from the mitnagdim, literally the rabbinic “opponents” to Hasidism’s bold spiritual innovations, as well as from the maskilim, modernizing Jews who saw Hasidism’s deep traditionalism and isolationist ideology as great obstacles to Jewish emancipation. Neither group had many qualms about denouncing their Hasidic brethren to the secular authorities as dangerous subversives.

Hasidim faced repression and incarceration at the hands of almost all of Eastern Europe’s monarchs. They were persecuted as counterrevolutionaries by Soviet authorities who — with the energetic assistance of members of the Yevsektsiya, the Jewish section of the Bolshevik party — closed down many Hasidic schools and shuls. Finally, and most tragically, the Hasidic world was decimated by the Nazis.

Despite it all, and contrary to every reasonable expectation, the Hasidim have done much more than merely survive. They thrive today, arguably as never before.

For Hasidim, it is the Besht who set them on the course they have followed for the past two-and-a-half centuries. Born around 1700 in the impoverished Podolia region of Poland, the Besht initially worked as a simple belfer — the rough equivalent of today’s school crossing guard — taking children to and from cheder. But he quickly acquired a reputation as a miracle-working healer and clairvoyant, enlightened by heavenly ascents. He is credited with teaching a new popularized mystical doctrine emphasizing the immanence of God in the world, which allowed even the simplest of Jews to attain union with the Divine. The Besht is considered by all Hasidic sects to be their holy patriarch, a model for the charismatic teachers and spiritual mentors, or rebbes, who stand at the center of Hasidic life.

Yet even as the often-fractious Hasidic world finds common ground in the adoration of the Besht, the basic events of his life have long been shrouded in mystery, and remain subject to scholarly debate. The Besht left nothing in writing, aside from a few personal letters attributed to him, and at his death he seems to have had only a handful of followers. Some scholars even questioned whether he existed at all.

The Israeli academic Moshe Rosman deserves credit for permanently putting to rest any suspicions about the Besht’s existence. He uncovered a trove of Polish archival documents from the Besht’s hamlet of Medzhibozh, concerning such legal matters as his pension and annual taxes, which were subsidized by the town’s Jewish community.

Yet Rosman, in his book ironically titled “Founder of Hasidism,” questioned the degree to which the Besht can really be considered Hasidism’s founding rebbe. In particular, he questioned the reliability of the often-fanciful Hasidic hagiographies that depict the Besht as the originator of key Hasidic doctrines.

More recently, the distinguished Israeli historian Immanuel Etkes has argued, in his definitive biography of the Besht, that much can be learned from Hasidic sources about the Besht’s actual teachings. Etkes conducted a meticulous analysis of the most important hagiography, “Shivhey Ha-Besht” (“The Praises of the Besht”), which first appeared in 1814, almost 55 years after its subject’s death. He convincingly concluded that the Besht was in fact responsible for formulating Hasidism’s animating ideas and laying its enduring foundations.

One longstanding, and particularly consequential, area of scholarly disputation centers on the relationship of Hasidism to messianism. On this topic, we get a glimmer of the Besht’s own views in a letter he wrote to his brother-in-law — the most important text known today that has been authenticated as the Besht’s own. In it, the Besht describes one of his many heavenly ascents, in which he encounters the messiah:

Finally I rose and arrived at the actual Palace of the King Messiah and I actually saw [him] face to face, and great untold mysteries were revealed to me…. and there was in heaven much happiness and rejoicing; so I decided to ask him, ‘When, my Lord, will you be arriving?’ But the answer from his Eminence was, ‘This cannot be revealed, but by this shall you know: When your [the Besht’s] learning becomes publicly known and your teachings shall be spread across the world… then shall evil be broken and it will be the time of favor and salvation. And I worried about this and it greatly pained me on account of the very long time this would take.

Some scholars contend that this letter reflects an urgent messianic agenda (of the sort embraced by many contemporary Chabad Hasidim who hold the aberrant belief that their late rebbe is the messiah). I would argue, however, that this remarkable testimony actually conveys the very opposite sentiment: namely, that the advent of the messianic age remains a spiritual process whose culmination is far beyond our days or current capacities.

In Gershom Scholem’s famous formulation, Hasidism, by making a mystically redemptive experience accessible to all Jews, effected a “neutralization of the messianic impulse” in Judaism. Indeed, Chabad’s recent messianism notwithstanding, Hasidism has mostly succeeded in channeling such spiritual energies into a remarkably stable, and ultimately conservative, system of religious life.

It is one of modern Jewish history’s greatest ironies that this grass-roots revivalist movement with a radical mystical theology, feared at its inception as a threat to rabbinic Judaism, has ended up being a remarkable conservator and transmitter of Jewish tradition and learning. It is no exaggeration to say that the average Hasidic 10-year-old in the Williamsburg section of Brooklyn or in Montreal’s Outremont neighborhood is more deeply versed in mimetic Jewish religious practice than are a great many American rabbis.

But the larger Jewish world has also been a beneficiary of the depth and intensity of Hasidic religious life. It is no coincidence that the ranks of the greatest modern Jewish thinkers and writers have been filled with individuals who were raised in Hasidic communities, from Ahad Ha-am and Abraham Joshua Heschel to Isaac Bashevis Singer and Elie Wiesel. Meanwhile, Hasidic tales, music and dance continue to inspire an assortment of Jewish Renewal, neo-Hasidic and other new-age spiritual movements, with Hasidic elements even managing to permeate contemporary Reconstructionism, founded by the most pragmatic and rational of all American Jewish thinkers, Mordecai Kaplan.

Still, the Besht’s most significant heirs are to be found among the traditional Hasidic communities themselves. Due to their high birthrates and minuscule rates of attrition, Hasidim are increasingly becoming a force with which the wider Jewish community must reckon. At times, Hasidism’s uneasy relationship with modernity has made this reckoning an ugly one, whether it’s the battles over public space and funds in Israel, disputes over zoning and other civic issues between Hasidim and their neighbors, or high-profile ethical and financial scandals.

The Hasidim will always be outsiders by choice, and that is bound to generate tensions until the end of days. But on this occasion, we would do well to pause for a moment, stand back and admire the tenacity of the Hasidim, the depth of their yiddishkeit, the enviable solidity of their communal and educational institutions, and, especially, the richness of their religious lives. Most of all, their very survival is worthy of our blessing. So, on this historic yahrzeit, let us set aside our grievances, and simply wish the Hasidim and their long-dead Besht: L’chaim!

Allan Nadler, a frequent Forward contributor, is a professor of religious studies and director of the Jewish studies program at Drew University.

What the Baal Shem Tov Left Behind