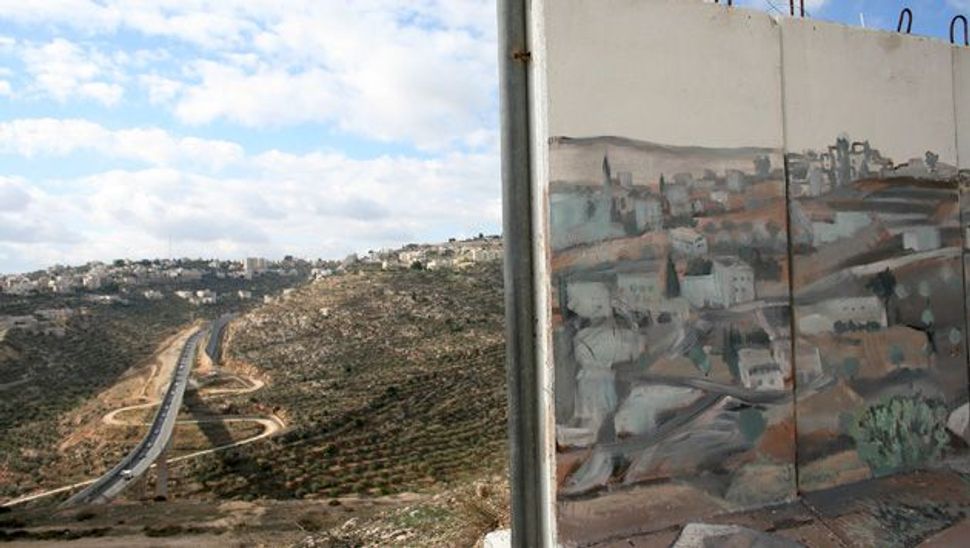 Beyond These Walls: A barrier, built to protect the Jerusalem neighborhood of Gilo from Palestinian gunfire, features a mural of the scenery beyond it. Image by GETTY IMAGES

Is the two-state solution passé? Serious people, with democratic instincts, are asking this now, but it is hard to think of a more frivolous question.

The alternative to a two-state solution is not a one-state solution. It is war, Bosnia-style. It is one thing to become exasperated by the occupation and to start throwing around the term “apartheid.” It is quite another to start believing that this little hyperbole is all you need to know about the situation, or that a democratic solution for Israel and Palestine must ultimately conform to South Africa’s — one state, “one-person, one-vote.” The idea that the occupation is producing a single country — or that an eventual Arab majority will be able to vote Israel out of existence — is about as realistic as expecting to drive in Jerusalem without being cut off in traffic.

There are two nations here — distinct from each other in their languages, religious cultures and historical grievances. Israelis and Palestinians are at very different levels of economic development, but neither will surrender the dream of a political border around its cultural facts — and even in the best of all possible worlds, it’s not clear why either should.

But then what, after 40 years of occupation, can a two-state solution possibly look like? Aren’t skeptics right to imply that returning to pre-1967 realities will be impossible, even if returning to, in effect, the pre-1967 border will be mandatory? For that matter, is a democratic solution of any kind still feasible? These are better questions.

In any peaceful resolution, Israel and Palestine will constitute one commercial ecosystem. At present, some 90% of Palestinian imports come from Israel, and 80% of Palestinian exports go to Israel.

The two states would interlock into one large urban landscape (excluding the Negev, comparable in size to greater Los Angeles), connected to global and regional networks, but with two distinct cultural nodes — a Hebrew north-south megalopolis along the coastal plain, anchored by Tel Aviv, and an Arab megalopolis along the highlands of the West Bank, anchored by East Jerusalem/Ramallah.

What jurisdictions could either state exercise in peace without the institutional cooperation of the other? The answer is not many. Think of security, water, bandwidth, transportation, airspace, electricity, tourism, labor mobility and currency policy — you name it.

The destinies of the two states would be profoundly intertwined. Think of Israel deepening its free trade ties to the European Union and the United States, and how this would have an impact on Palestinian goods, or how international forces will help enforce the peace of Jerusalem. Ideally, there would be a common market for entrepreneurs (including for Jordanian Palestinians, whose investments in the young Palestinian state will be crucial). It all makes the phrase “self-determination” sound a little pretentious, doesn’t it? The result may not amount to an actual federation, but the application of federal principles would be unavoidable.

Israel’s own Arab citizens, in this context, could well become a kind of bridging population between Israeli and Arab businesses, their towns nested between the two states, their elites moving increasingly into one megalopolis or the other, and requiring the possibility of dual citizenship or extraterritorial citizenship. (Eventually, some solution like this may also be negotiated for Jewish residents of Palestine.)

Of course, the status of Israel’s Arab citizens now figures prominently in one of the main arguments made by proponents of a so-called “one-state solution.” The two-state solution’s detractors note that Israel discriminates against its non-Jewish citizens, and therefore conclude that a Jewish state has no place in the modern world.

One-staters — but not only one-staters — are right to resist a Jewish state that derides as “anti-Zionist” demands for the equal treatment of all its citizens. Indeed, even if a peace with Palestine materializes, should Israel continue to treat its Arab minority as it currently does, its next intifada will be within the Green Line.

But instead of doing away with Israel, as the one-staters demand, we should seek to define its identity as a “Jewish state” according to the original Zionist aspiration of building a modern, Hebrew republic for free citizens. Indeed, Israel’s own Declaration of Independence stipulated that the newborn state would “ensure complete equality of social and political rights to all its inhabitants irrespective of religion, race or sex” and “guarantee freedom of religion, conscience, language, education and culture.”

An Israel that lives up to its founding creed would remain a sovereign Jewish state while reconciling national claims with ordinary human rights. Its first official language would be Hebrew, and its cultural commitments — its festivals, history, historical literatures — will be (mostly) Jewish, much as Palestine will be Arab and (mostly) Muslim.

But Israel would also have to guarantee what a majority of Israelis already want, namely secular protections for individual consciences and hybridized identities. Israel cannot expect to be embedded within a global, democratic system yet, at the same time, fail to enforce individual civil rights.

Israel, in other words, will have to retire the residual institutions of the old Zionist settler state that is still encased within — and seriously threatens — the democratic country that aspires to be joined to the world. Currently, a state within a state empowers an ultra-Orthodox rabbinate to impose halachic norms, uses national land and outdated Zionist institutions to “Judaize” Arab regions, segregates primary and secondary education by religion, fetishizes Jerusalem, maintains a population registry that refuses to recognize “Israeli” as a nationality, and so forth.

None of this means Israelis would somehow be forced to lose their identities as Jews. Rather, it means that no state should be in the business of legislating what “Jew” means any more than it would legislate the meaning God, beauty or love. A Jewish state can only give its citizens — by privileging Hebrew and deepening democratic norms — the means to innovate a Jewish civilization.

Funny, when you sketch the two-state vision out in this way, the most striking thing about it is how unoriginal it is. Does any Western democracy not conform to its norms — the interconnectedness, the secularism, the pluralism? But, not so funny, this vision seems utterly fanciful in the context of Israel’s current political universe. Israel’s cosmopolitan business elites are building global connections, but are mainly subordinating themselves to hard-line politicians, even though perpetual war will ultimately destroy their work. As for current Israeli political leaders, talk about bringing Israeli democracy up to code, and they accuse you of anti-Semitism or self-hatred. Their Zionism, pathetically, has become a psychological show of “strength.”

Perhaps one may take encouragement from the very smallness of Israel and Palestine, which makes the influence of American and European diplomacy that much more decisive here. Big changes seem imminent. Sooner or later, the danger of political and economic isolation will force Israeli elites to choose between greater Israel and global Israel; even Jewish settlers and Palestinian insurgents, faced with a new reality (a negotiated border, a world mobilized behind a peace deal, a time-limited compensation package) will, over time, accommodate to it. The key is to keep one’s eye on generational shifts and the requirements of a fair deal for both Israelis and Palestinians, not on the depressing daily headlines.

There are many foreseeable ways to war, but only one way to peace. And things that “cannot go on” eventually don’t.

Bernard Avishai, an adjunct professor of business at the Hebrew University of Jerusalem, is the author of “The Hebrew Republic: How Secular Democracy and Global Enterprise Will Bring Israel Peace at Last” (Harcourt, 2008).