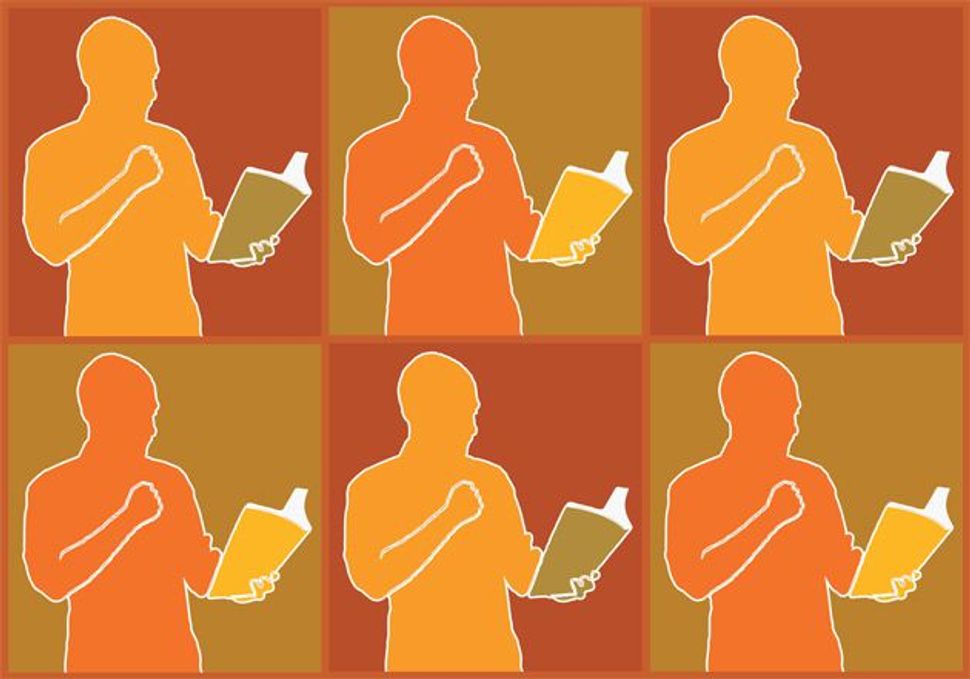 For the sin of Refusing To Sacrifice

After this year’s environmental disaster in the Gulf Coast, there’s no denying that a culture of unrestrained consumption has made us all complicit in the earth’s destruction. Yes, British Petroleum acted with bullheaded negligence. But it can’t shoulder the blame alone. BP’s irresponsible business practices were driven by our unrelenting thirst for oil.

Our collective act of atonement this year should be personal sacrifice with real, practical effect. What will we give up to reverse the course of human-generated environmental destruction? As long as each of us is not willing to be even slightly inconvenienced, we can be sure that no amount of censure or regulation will save us.

For the sin of Pigeonholing Other Jews

Wherever we live on the spectrum of Jewish identity, too many of us pigeonhole our fellow Jews, coddling our own biases instead of truly seeing one another.

Many an Orthodox Jew automatically surmises that a fellow Jew who is less ritually observant or not observant at all must not care about God or Judaism. And many other Jews feel an immediate and visceral aversion to members of the tribe whose dress or actions mark them as “religious,” automatically assuming they are small-minded and hateful, if not actual throwers of epithets or rocks.

Were all of us to make an effort to truly see one another — not challenge or change or even “bring closer,” but simply see, in the light of good will and ahavat yisrael — and connect in whatever way we can, we would begin to atone for a dangerous blindness that has plagued the Jewish world for too long.

Rabbi Avi Shafran is director of public affairs for Agudath Israel of America.

For the sin of Tolerating Intolerance

We — American Jews — have sinned by not fighting to guarantee to our Muslim neighbors, our fellow citizens, the religious freedoms we ourselves expect.

We belong to a small minority, once reviled for our beliefs. In our not so distant past, some Americans wanted to deny us the right to worship where and how we wanted. We had to plead our case to the larger public to win what we now assume to be our non-negotiable entitlement.

Because of that history, we must stand up and be in the forefront of the battle to ensure that others who now endure a vicious campaign of hate also become beneficiaries of our country’s religious freedom. It is not only those American Jews who actually participated in efforts to block an Islamic community center in Lower Manhattan who have sinned. Too many of us have sat idly by, and for that, we should atone.

Hasia Diner is a professor of American Jewish history at New York University and the author of “We Remember with Reverence and Love: American Jews and the Myth of Silence after the Holocaust, 1945-1962” (NYU Press, 2009).

For the sin of Incivility

The Second Temple was destroyed because of baseless hatred and the inability to listen to people with different opinions. Many sins we confess on Yom Kippur relate to words we speak and the way we speak them. In our Jewish community, incivility and anger overwhelm our communal life.

In Los Angeles, we’ve witnessed a Peace Now speaker shouted down by boos at a community-wide Israel rally, and in Massachusetts there was the controversy over Israeli Ambassador Michael Oren speaking at Brandeis University’s commencement. How can we maintain our passion for our vision of Israel without shouting down or demonizing those who think differently?

Incivility and anger not only plague the Jewish community, but also what passes for American political discourse.

To atone we should stop forwarding hateful e-mails (like the one that accuses President Obama of being a Muslim — as though that is unacceptable in America!). Let’s guard our tongues (and our fingers).

For the sin of Biblical Illiteracy

As Jews, our greatest sin is the failure to know ourselves. And nowhere is this problem more acute than in our illiteracy regarding our original cultural wellspring, the Bible.

The Bible is the big blind spot of Jewish identity. Too often, we approach it with so much baggage — over-focus on authority or authorship, fearful associations with Christianity, embarrassment at passages that seem archaic — that we forget to make it our own. Even Orthodox yeshivas, where old texts are king, give the Pentateuch only a supporting role to the rabbinic legal works, while the rest of the Bible is mostly skipped. Even as we invest in education, we leave the deepest sources of our self-understanding to others to interpret.

Our Israelite past should be a source of pride, our ancient texts recognized as our greatest contribution to humanity, more so than even our scientists, novelists and comedians. Who would we be without the Tanach?

David Hazony is author of “The Ten Commandments: How Our Most Ancient Moral Text Can Renew Modern Life” (Scribner).

For the sin of Writing Off the Intermarried

This Yom Kippur, I would hope that many of us re-examine our assumptions that all Jews who intermarry are trying to escape their Jewishness.

Historically, this assumption was often correct when being Jewish was a social and professional handicap. Even today, it may be true for some. But often intermarriage is simply the result of our living in an open society in which 98% of people are gentiles. The non-Jewish spouse may even be attracted to the values of Judaism and be open to conversion.

Encouraging our children to seek Jewish mates should always be the first option. But we are so few in number that we can ill afford to write anyone out of the Jewish community if alternatives exist. We would do well to see intermarriage more as a doorway that can lead into Judaism than a doorway leading out — and our imports will generally be better than our exports.

Rabbi Harold S. Kushner is rabbi laureate of Temple Israel in Natick, Mass., and the author of “Conquering Fear: Living Boldly in an Uncertain World” (Knopf, 2009).

For the sin of Averting Our Eyes

Poverty, hunger, illness, global disasters — there are so many problems in our world in need of attention that we can easily feel overwhelmed. Often, when we begin to think about all there is to be done, both at home and abroad, in the Jewish community and beyond, we shut down. “Compassion fatigue” is commonplace, and it’s dangerous to our souls, and to the work in which we are duty-bound to engage.

The Torah (Deuteronomy 15:7) reminds us: “Do not harden your heart or close your hand from your poor brother.” When we harden our hearts, we are guilty. When we try to tune out others’ suffering, we have sinned. When we try to pretend “it’s not our problem,” we have transgressed. S’lach lanu — forgive us! Let us re-open our hearts, see, and take action.

Rabbi Danya Ruttenberg is senior Jewish educator at Tufts Hillel and author of “Surprised By God: How I Learned To Stop Worrying and Love Religion” (Beacon, 2008).