Freed From the Slavery of Illness 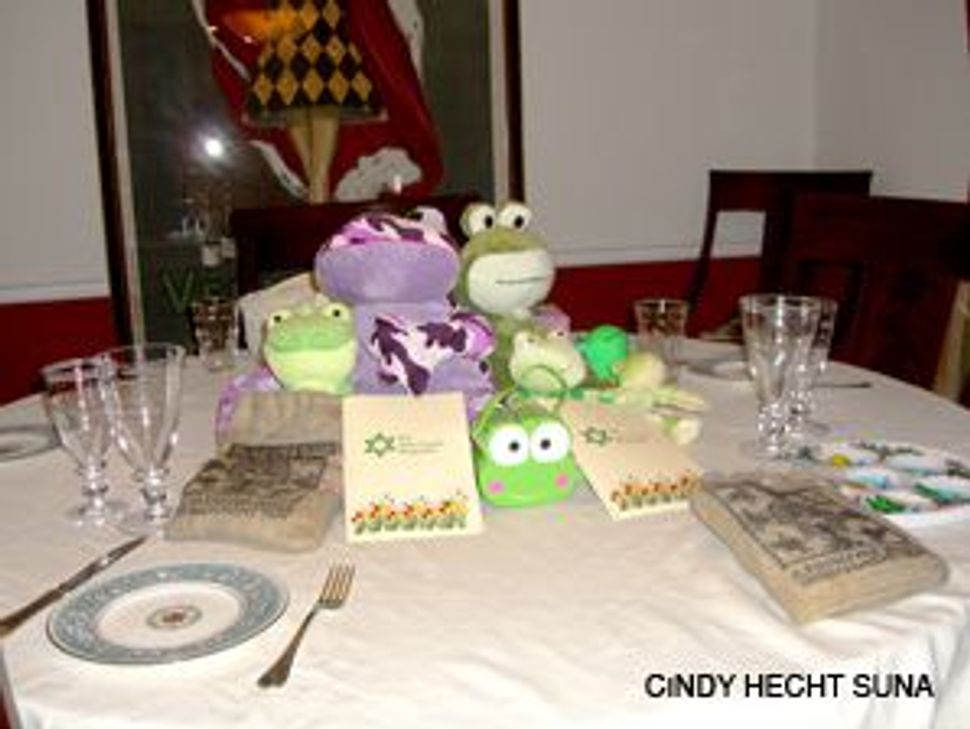 NO LONGER A PLAGUE: The hopping balls of slime God sent to torment the Egyptians have a place of honor at this Passover table.

When the Plague Bags come out for our Seder, the toy frogs will have a place of honor at our table. We’ll call out the names of nine plagues instead of 10. 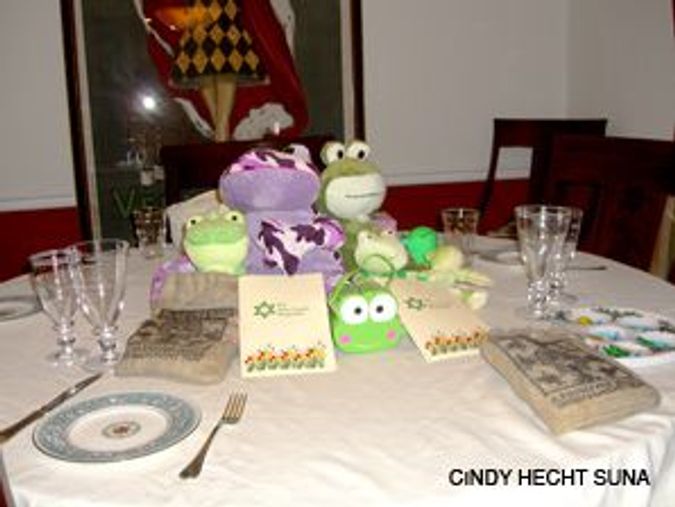 NO LONGER A PLAGUE: The hopping balls of slime God sent to torment the Egyptians have a place of honor at this Passover table.

This isn’t the first time I’ve tinkered with Passover, but it’s the most sacrilegious thing I’ve done. Up until now, the changes I’ve made have been both spiritual and practical.

As an adult, I compiled my own Haggadah because I needed to find meaning in a holiday I didn’t observe as a child and had no frame of reference for, except bad food. During my service, we say a special prayer of thanks for the strong women in our lives, and we talk about the broken matzo representing unknown parts of ourselves. I serve lamb because I’ve never mastered brisket.

Why is this year is different from all other years? Because this year, I had cancer and survived — and in my struggle with disease, I developed a peculiar affection for the hopping balls of slime God sent to torment the Egyptians.

I haven’t always had a fondness for amphibians. But after a real plague entered my house, I think of frogs as nothing less than lifesavers. They helped me explain my diagnosis to my 9- and 14-year-old daughters. When I was feeling battered by chemotherapy, they reminded me that I was, in all likelihood, going to live.

As a parent, I’d already had difficult conversations with my children. We’d tackled divorce, the death of elderly relatives and loved ones stricken with progressive illnesses like multiple sclerosis and Alzheimer’s.

But last December, three weeks after my 46th birthday, I was the person who was very sick. A trip to the doctor for some moderate lower back pain yielded a much more ominous diagnosis: aggressive Stage 4 non-Hodgkin’s lymphoma.

I wasn’t really sure what I was going to say when I called the girls into my bedroom to explain what was happening.

“Mom has cancer, but it’s not the kind you die from,” were the first words that came out. Carolyn, 14, started to tear up; 9-year-old Lauren simply looked confused. Making a weak attempt at levity and trying to connect with them on their level, I then declared, “No one in this house is going to croak unless we get a frog.”

The next day, while I was at the oncologist, I asked the babysitter to take Lauren to Animal Alley at Toys ‘R Us to buy the largest stuffed one she could find. “Croakie” was in Lauren’s arms when they picked me up from my doctor’s appointment.

In our house, frogs became a symbol of hope. The news spread. During the four months I was undergoing chemotherapy, friends brought us all kinds of frog paraphernalia: pajamas, slippers, a robe, a picture frame. We got ones that sang, ones that danced and ones that made noise when you threw them on the floor, an action I periodically found very therapeutic.

My longtime boyfriend, who had already lost both his father and his best friend to cancer, gave me the tackiest collectible of all. It was a plastic, frog-head purse. A ring and a love letter were inside, reassuring me that we’d still get married and have the future together we’d been planning.

I have to admit, all the kitsch helped. My younger daughter would sit on my bed at night and perform little puppet shows with some of the frogs. All of this goofy stuff made me laugh, and, at times when I felt more like crying, they reminded me of the promise I’d made to my children and to myself.

“You croak. I don’t. That’s how this is going down,” I’d say to growing assortment of green junk on my dresser.

In April, I spent the first two nights of Passover on the lymphoma floor at Sloan Kettering receiving my final three-day infusion of chemotherapy. The first thing I did when I came home from the hospital was “de-frog” my bedroom.

As a well person, I collected “Gone with the Wind” movie memorabilia and vintage paper dolls. Disposing of the frogs was my way of declaring that I was well. But I couldn’t bring myself to throw them out, so I put them in shopping bags and stuck them in the basement, just in case I ever needed them again.

Even though I’ve been in remission since last April, I’ve decided to bring them out for our Seder. To my family, they are concrete symbols of the journey from the slavery of illness to the freedom of health.

Although I’m a textbook Scorpio, I now think of Passover as my birthday. For me, it will always signify the end of treatment and the beginning of recovery and my life as a cancer survivor. In case I haven’t messed with tradition enough, I’m also considering putting candles in my flourless chocolate cake, making a wish and blowing them out.

Cindy Hecht Suna is a writer living in Larchmont, N.Y.

Freed From the Slavery of Illness