Getting Serious About Love 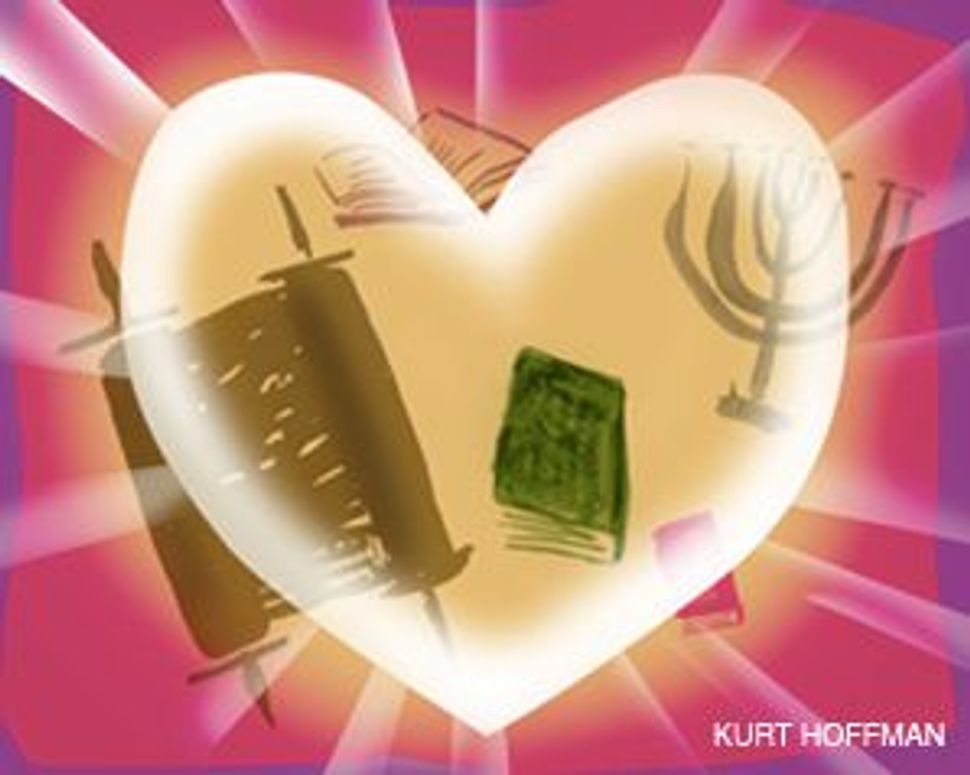 In a recent sermon, up-and-coming rabbi David Ingber complained, “You never hear about love in Jewish newspapers.” Part of the reason for this is, of course, that love is rarely newsworthy; crisis is just better press. But it is true, in the Jewish world, that religiously, intellectually and culturally, love isn’t serious. 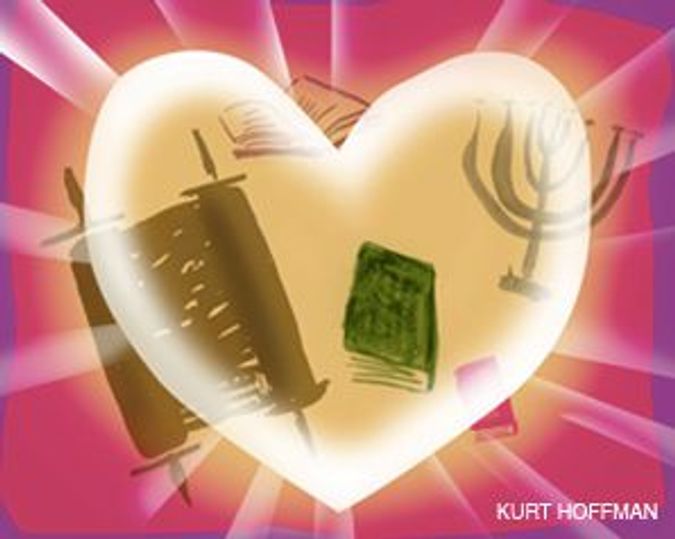 Some of this may just be the intellectual myopia of the (male) “People of the Book.” We’ve long valued our Einsteins and Vilna Gaons, not so much our emotional geniuses. Even today, most prominent Jews are articulate, not warm; Jewish books win awards for being smart, not soft. Reinforcing these cultural prejudices is the fact that religious love has often manifested in recent years as either fundamentalism or narcissism. We’re all familiar with those too in love with their god: on the right, evangelical fundamentalists, Islamists, missionaries and proselytizers all are filled with a kind of love — the kind that blends all too well with zealotry.

To many, the left is almost as irritating. To them, egotism is the primary path of much New Age spirituality: “I do it because it makes me feel good,” or holy, or special, or some other pleasure of the self. Thus, they claim, spirituality actually reinforces the ego instead of getting beyond it. All one is doing is making oneself feel good, with blithe disregard for the contradictions, nonsense or, as in the case of “right-wing hippies” in the Jewish world, injustices blended in with the yummy stuff. It’s all a little too flaky, too indulgent.

Personally, though, I’m getting a little tired of people beating up on the New Age. It’s really not all that bad; a lot of New Age folks are sincerely trying to be better, and better rounded, human beings on all levels, including ethical ones. And if I had my choice between a nation of fuzzy-thinking New Agers and a nation of “clear”-thinking fundamentalists, I know which I’d choose in a heartbeat.

So I want to suggest three defenses of love-based spirituality: first, that traditional Jewish intellectualism is not as different from it as we might think; second, that it’s our best hope for the future, and third, that it is possible to get serious about a religion of love.

First, it’s time we stopped pretending that drumming and chanting are spirituality but learning and leyning (reading Torah) aren’t. Traditional Jews may say that they practice their religion because God commanded it, but they’re still making a choice to follow that command. In fact, they want a “spiritual feeling” just as much as anyone else — it’s just that their feeling of choice is one of doing the right thing (or perhaps just being free from guilt) and being part of a halachic community.

The same holds true for those rationalists who try to build an internally consistent Jewish theology to accommodate exactly what they want to believe about, and do in, the world. Often, this is an exercise in false consciousness. Simply put, when one has as much at stake in the game as a religionist does, supposedly rational reflection is inevitably corrupted by one’s own fervent desires to have it all come out all right.

For example, suppose I wish to maintain a rigorously Orthodox religious practice while denying the divinity of the Torah, the existence of the personal God, and any system of reward or punishment. No problem! Try this philosophical rationale: “The point is not the origin of these texts, but the need to have a sense of obligation; a sense of covenant. Of course we remain uncertain; the uncertainty is part of a true religious path. But it takes place within Halacha, a structure of meaning and value that keeps front and center our deepest commitments while at the same time honoring our deepest doubts.” Et cetera. Isn’t it clear that this sort of thing is no less a rationale than what one might hear from a “spiritual” Jew, who mixes and matches in a different way? Sure, it’s got more intellectual pretension, but all that argumentation is actually in the service of irrational emotional needs.

This leads me to my second point: that there is a dignity and an honesty in according the heart its place, perhaps the primary place, within the religious life. In today’s bricolage world, opt-in religion cannot survive if it is based on fear, threat, myth, cosmology or tribe. We just don’t believe these things anymore, and above all, we are pragmatists: We want something that works. Love works. A heartless religion is one that has forgotten why we are religious in the first place.

But is it possible to get serious about a religion of love so that it’s not just indulgence and play? Is it possible to cultivate a heart-based Judaism with the credibility of our intellectual heritage? And is it possible for such a faith to be sufficiently meaningful, coherent and in-your-kishkes real that it can be successfully passed on to children?

I think it is — but it takes work.

First, “the path of the heart” does not mean yielding to all the heart’s desires — that is, doing whatever one wants. The key is how those “wants” are evaluated. If you ask me “what I want” when I’m in the middle of a hectic and stressful workday, I’ll give you an ill-considered, selfish answer. The same is true if you ask me this when I’m blissed out and having a fun weekend. So, if I’m going to be so audacious as to determine, on a case-by-case basis, what religious practices are working for me, I’d better be sure that my discernment is as clear as it can be. Otherwise I’m deluding myself.

Thus, serious contemplative practice — avodah in Hebrew, literally meaning “work” — is necessary, if one’s own subjectivity, rather than myth, theology or communal norms, is to be the basis of a religious life. And love-based people have to take avodah as seriously as the fear-based people take theirs.

Personally, my primary form of avodah is meditation, the process of coming to see clearly. Meditation lets my sophisticated, intelligent, trying-to-be-cool mind get out of the way so that my unsophisticated, loving, shamelessly uncool heart can be heard. And so I take meditation seriously, as a religious obligation, not a leisure-time activity.

There are many other love-practices, of course. Just spending time with children is one of them, if it’s done with intention and presence of mind. Working with myth, ritual and symbol can activate the imaginative faculties, illuminating one’s own narratives in the light of timeless, powerful archetypes. Or there’s what Thomas Moore calls “Care of the Soul,” which may include viewing or participating in art, theater, food, music, dance or another form of culture. Conscious sexuality, body practices like yoga and exercise, special diets and nutrition — all these can wake up the body and the heart. There’s no shortage of practices, and no one practice that will be right for everyone. The point is that the practice and the diligence separate serious spirituality from the casual, vague or just plain lazy kinds. A religion of love requires as its foundation the cultivation of love.

Second, we have to reinvent the experiences that precede theologies we no longer believe in. In traditional Jewish life, both love (ahavah) and fear/awe (yirah) are connected to ideas about God. Neither, however, actually requires theology — just attention. When I learn of the genocide in Tibet, I feel a sense of outrage and an obligation to do more. When I ponder the images from the Hubble telescope, I remember that I really have no idea what the universe is like and that I have no business making propositions about it. When I reflect upon my own privilege as a (relatively) wealthy white male, I remember that I have been given a leg up in the world that comes at the expense of others. And when I visit a place of natural sublimity, it takes my breath away, and I lack the words to describe my wonder. This is all yirah — sacred awe, or fear — and it arises just fine without any theologies of reward or punishment.

Likewise, ahavah, which arises whenever my mind is quiet enough to appreciate the silence that grounds all sound, the miracle of a single string bean, the beauty of the humblest of houseplants, precedes theology. But once again, to replace theology with experience takes work. It’s not a matter of talent or genetic makeup or luck; it’s a matter of the choices we make, and the environment we co-create. As Rabbi Zalman Schachter-Shalomi says, the mind is like tofu — it takes the flavor of what it marinates in. Marinate in front of Bloomberg machines all day, and it’s hard to experience much awe or love, unless you make a special point of doing avodah for your heart, every day, as a religious obligation. You can’t skip the hard part.

Finally, let’s stay clear about the goal. There’s a tendency to see these kinds of heart-practices as indulgent fads that bourgeois boomers follow to make themselves feel good. But I do spiritual practice not to feel good but to feel, period. Without work, it would be very hard for me to know what I really feel about many things; I’m just too busy thinking, and being buffeted by the feelings I have, to know what I actually feel and think on my own. No wonder “doing what we want” has led to Wal-Marts and strip malls; without quiet and reflection, “what we want” is just selfish appetite, whether coated with religion or consumerism or both. No wonder secularists and traditionalists alike condemn spirituality as narcissism. Without serious work, it is.

But then, that’s true of any religious path, and any secular one, too. There’s no substitute for doing the work and getting honest with oneself. Otherwise, you’re just being ignorant of your motivations. Personally, it’s only when I am finally able to dodge my 400 daily e-mails, slow down the mental to-do list and take a breath that I can presume to say something about which religious moments bring me closer to what matters most and which do not. Because only when my spiritual practice is serious am I able to hear my own inner prophetic call, to love and to serve, to be honest and to stop worrying about what Heeb or The New Yorker might think of a spiritual fool like me. Like the children of Israel said, “Na’aseh v’nishmah” — “When I do the work, I hear the voice.” But only then.

Getting Serious About Love