Asking for the Right To Serve, and To Tell 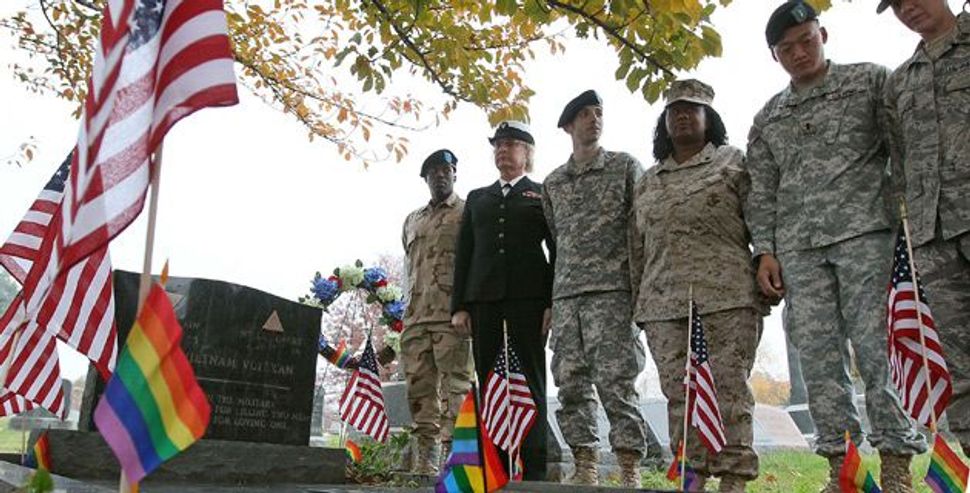 Salute: Gay former service members participate in a November 15 vigil at the Washington grave of decorated Vietnam veteran Leonard Matlovich, who was discharged by the Air Force for being gay. Image by Getty Images

My grandfather, of blessed memory, would have hated “Don’t Ask, Don’t Tell.” He was a scrupulous and fiercely principled person, and I believe that his experience serving in the military can shed light on our understanding of the debate over this policy today.

My grandfather immigrated to Canada from Poland at the age of 13. He was proud of how quickly he learned English and shed his immigrant’s accent. But he was most proud of his years serving as an officer in the Canadian army in Europe during World War II. As was true for many Jews who were immigrants or children of immigrants, his army service cemented his North American identity. When he encountered anti-Semitism in the army, it felt like a betrayal of the promise of safety and equality in his adopted country. But the anti-Semitism did not cause him to hide his Jewishness or to leave the army. Instead, the experience only made him more determined to serve his country — and, in some ways, even made him more Jewish.

There are believed to be tens of thousands of gay, lesbian and bisexual Americans serving on active duty right now. Some estimate that there are more than a million gay American veterans. Gay men and lesbians have risked their lives, and died, in service to this country.

In return, they have been asked to hide themselves. When forced into the open, they have been shamed, demonized and, ultimately, expelled from the armed services. Since 1994, more than 14,000 gay service members have been discharged under “Don’t Ask, Don’t Tell,” according to the Servicemembers Legal Defense Network.

As Jews, we know what it is like to give everything of ourselves to a country, only to be singled out for our identities as Jews. In every generation, Jews have been asked to be less Jewish, or not to be Jewish at all. Jews have been forced to go underground — whether it’s Americanizing our names, lighting Shabbat candles in the basement or being compelled to shed our “peculiar” practices. We know how insidious it is to be forced to keep our identities secret. We know that this kind of forced silence leads to the worst kind of discrimination. Perhaps that knowledge is what led a coalition of 10 national Jewish organizations this past spring to urge Congress to repeal “Don’t Ask, Don’t Tell.”

This year, as we celebrate Hanukkah, we recall how a band of Jews fought against efforts to suppress their identity. Indeed, Hanukkah is the antithesis of “Don’t Ask, Don’t Tell.” We are instructed to light the Hanukkah lights for pirsumei nissa — to publicize the miracle. We place our Hanukkah menorahs in our windows so that people will ask, so that we can tell the story of the miracle of Hanukkah.

On the first day of Hanukkah, the Senate holds its first day of hearings on “Don’t Ask, Don’t Tell.” Yet as the current legislative session draws to a close, the possibility of repealing “Don’t Ask, Don’t Tell” appears to be growing dimmer. Lesbian, gay and bisexual service members and their allies don’t need a miracle this Hanukkah, but merely a vote by a lame-duck Congress to repeal this unjust law. As we light our Hanukkah candles, and our senators debate, let us raise our voices, so that this country may increase in light and in justice in our days, in this time.

Asking for the Right To Serve, and To Tell