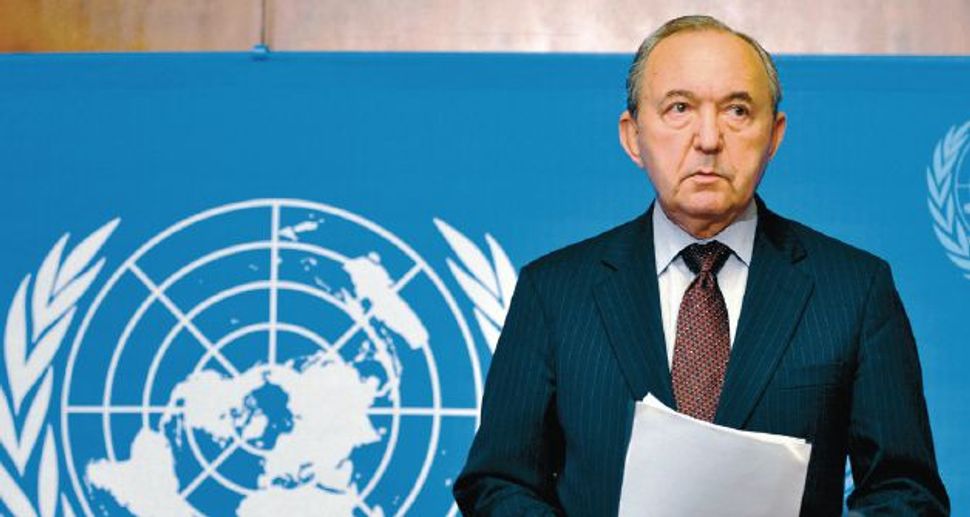 Two years after Operation Cast Lead, Israel’s three-week assault against Hamas in Gaza, we are still grappling with the fallout. Much of the public reckoning has been channeled into an acrimonious debate over the report of a four-person investigative commission appointed by the United Nations Human Rights Council and headed by Judge Richard Goldstone. Regrettably, the conduct of many of Israel’s supporters in this dispute has been both indecent and profoundly un-Jewish.

From the moment the Goldstone Report was released in September 2009, its lead author has been subjected to fierce, well-orchestrated attacks by Israeli and American Jews who purport to be defending the legitimacy of the Jewish state and the safety of the Jewish people. Rather than discuss the contents of the report — which concluded that during the 2008-2009 Gaza war, Israel (as well as Hamas) may have committed war crimes — Israel’s defenders launched an all-points campaign to bury it. But their strategy was complicated from the start by an inconvenient truth: Goldstone was one of them — a Jew, and not just any Jew, an exemplary one.

Until 2003, Goldstone served on South Africa’s highest court. Before that, he had distinguished himself as chair of a commission of inquiry into violence during the final years of apartheid, as chief prosecutor of war crimes in the former Yugoslavia and Rwanda, and as part of the team that investigated the U.N. oil-for-food scandal in Iraq.

Goldstone’s Jewish credentials were equally stellar. A proud, self-identiﬁed Zionist, he served on the board of governors of the Hebrew University of Jerusalem; as chair of the advisory board of Brandeis University’s International Center for Ethics, Justice, and Public Life; and as president of World ORT, the international Jewish educational organization. He also was a dogged investigator of Nazi war criminals in Argentina.

Obviously, it wasn’t easy to destroy Richard Goldstone. But for his report to be permanently deep-sixed, the man himself had to be thor-oughly discredited, recast not just as a naïve dupe of the human rights community but as an enemy of Israel, a Nazi in Zionist clothing, a perpetrator of “blood libel,” a self-hating Jew.

“There are three primary threats facing us today,” said Prime Minister Benjamin Netanyahu, “the nuclear threat, the missile threat, and what I call the Goldstone threat.” President Shimon Peres called Goldstone “a small man, devoid of any sense of justice.” Others in the government and media piled on, as did the so-called leaders of the “organized” American Jewish community. Harvard law professor Alan Dershowitz said Goldstone was “an evil, evil man,” “a traitor to the Jewish people,” the U.N.’s “token court Jew” and a “despicable human being.”

There’s a Hebrew word for what these people did to Richard Goldstone: They put him in cherem, meaning he was not just persona non grata in the eyes of our religious arbiters, he was totally cut off from the Jewish community. From the moment the report was released, he was treated like a leper — shunned, defamed, disowned — and the worst was yet to come.

In April 2010, the South African Zionist Federation reportedly threatened demonstrations outside the Sandton Synagogue if he showed up at his grandson’s bar mitzvah. Given the volatile political context, that was tantamount to banning the grandfather from the ceremony. No less an authority than Rabbi Moshe Kurtstag, head of the local rabbinic court, endorsed the idea that Goldstone should simply stay away, calling it “quite a sensible thing to avert all this unpleasantness.”

After an international outcry, Goldstone was able to attend the bar mitzvah. However, that hardly absolves Jews worldwide for the smear campaign against him. Appalling enough in human terms, I believe it should be condemned on speciﬁcally Jewish grounds. The most Jewishly observant and educated of Goldstone’s attackers surely knew that speaking ill of another human being (“hate speech” in current parlance) violates one of Judaism’s most sacrosanct laws, the prohibition against lashon hara (the Evil Tongue — i.e., gossip), which Maimonides deﬁned as any utterance (true or not!) that might cause a person physical or monetary damage, or shame, humiliation, an-guish or fear.

The Talmud’s famous story of the Oven of Achnai goes even further. It establishes that onaat devarim — verbal torment or abusive speech — is a more heinous infraction than physical assault. The story opens with a dispute among the sages of the Sanhedrin over the ritual purity of a clay oven. Most of the decisors agree that the oven is unclean, but Eliezer, a respected voice, though in this instance a minority of one, insists it is clean and summons four astounding miracles to prove his position. The sages dismiss these divine signs, proclaiming the Torah “is not in heaven” — meaning, the law is to be interpreted by human thinkers on earth — so the majority rules. God apparently agrees since the heavenly voice laughs and, disarmed by the sages’ logic, says, “My sons have defeated Me.” To underscore their victory, the sages set ﬁre to the disputed oven and everything else Eliezer had declared clean, then they vote to excommunicate him.

When Eliezer weeps and grieves, God, despite having ruled for the sages, responds to their mistreatment of him by withering harvests across the land, spoiling dough and incinerating every object Eliezer looks upon. The president of the Sanhedrin meets an untimely death, taking the hit for his minions’ sin of onaat devarim. The gravity of this forbidden activity becomes crystal clear: God nearly destroyed the world because of the “wounded feelings” of Eliezer, an honorable man.

Surely the rabbis who made Richard Goldstone’s life miserable were aware of that famous story as well as the tradition that similar be-havior caused the calamity of calamities, that the Second Temple was demolished for only one reason, sinat chinam (baseless hatred), Jew hating Jew, an infraction so severe that it merited an exile of almost 2,000 years.

The truth is, many holier-than-thou Jews violated several Jewish laws and traditions by politicizing Goldstone’s grandson’s sacred rite of passage, by causing pain to a man and his family, and by dumping verbal sludge on a fellow Jew whose only crime was to pursue justice and demand that Israel live up to its founding principles. Yet Israel’s fanatical defenders won’t let up on Goldstone until he is irreparably destroyed.

His foes mounted a fresh offensive last spring based on a front-page story in Yediot Aharonot, Israel’s mass circulation daily, that charged that during his years as a South African judge, Goldstone “sided through and through with the racist policies of the Apartheid regime” and should “do some soul-searching before he rushes to criticize others.”

Goldstone responded that though it was “the most difficult” decision of his career, he had accepted the judicial appointment in the belief that he could accomplish more by defending the rule of law from within the judicial system. His critics fell over each other exploiting the story and ratcheting up the rhetoric. Danny Ayalon, Israel’s deputy foreign minister, said, “I don’t want to exaggerate but these are the same explanations we heard in Nazi Germany after World War II.” Alan Dershowitz sank to a new low. “That’s what Mengele said, too,” he told an Israeli TV program. Israeli Foreign Minister Avigdor Lieberman reportedly ordered Yediot’s story distributed to his diplomatic missions abroad.

Yet Goldstone had garnered respect investigating state-sponsored violence against blacks during apartheid, and it was Nelson Mandela himself who subsequently appointed Goldstone to South Africa’s highest court post-apartheid. Thus, one can safely assume that he was considered a fair and honest judge.

Anyone claiming to espouse Jewish values ought to be outraged by the avalanche of attacks on Richard Goldstone. But they should be deeply conscience-stricken by the possibility, just the possibility, that the Israeli army committed atrocities in Gaza. Yet many in our community are still vilifying the judge, and almost no one is talking about his ﬁndings: Thousands of Palestinian homes reduced to rubble. Gaza’s infrastructure in ruins. Women and children burned by white phosphorus bombs. A man shot while his arms were shackled and left to die. Civilians shot and killed while carrying white ﬂags. Twenty-two members of one family killed in Gaza City.

It would have been “good for the Jews” and for Israel had the report’s substance been frankly confronted and debated, however the only game in town is “Kill the message, trash the messenger.” In that sense, Goldstone is the Eliezer of our age — a judge pledged to defend the law in the face of arrogant opposition, excoriated for holding Jews to their principles, excommunicated for speaking truth to power. One can only hope the contemporary story doesn’t end as badly as the one in the Talmud.

Letty Cottin Pogrebin is a founding editor of Ms. Magazine and the author of nine books. This essay is adapted from her chapter in “The Goldstone Report: The Legacy of the Landmark Investigation of the Gaza Conflict,” to be published January 11 by Nation Books.