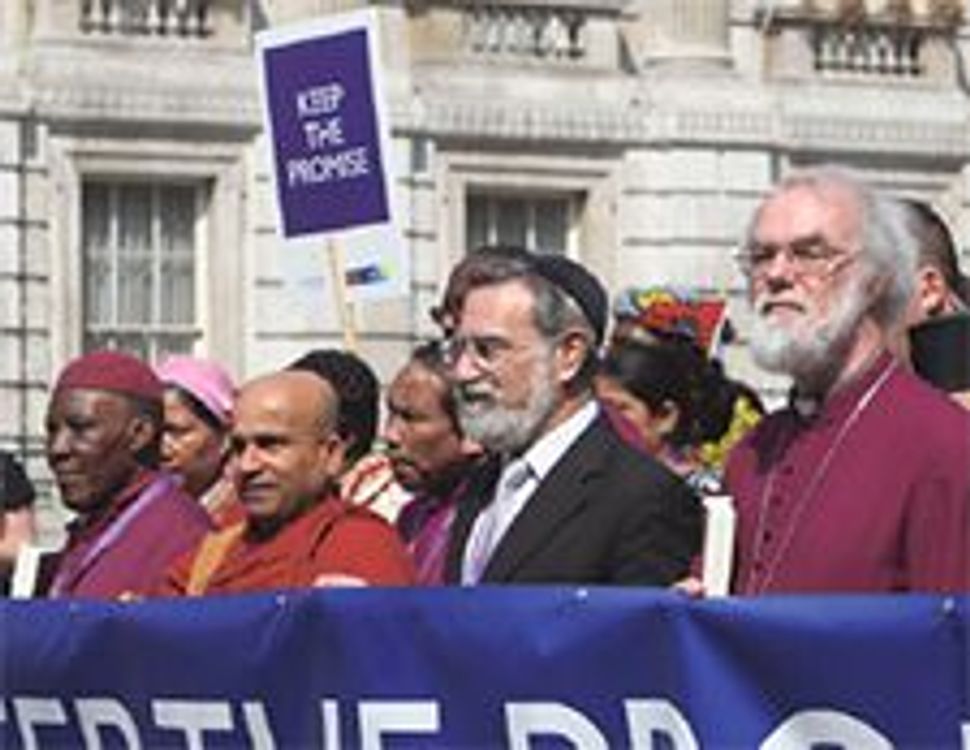 Dignity of Difference: British Chief Rabbi Jonathan Sacks (center) marches against poverty alongside other religious leaders in London in 2008. Image by Getty Imges

The announcement last month that the British chief rabbi, Jonathan Sacks, will retire in 2013 immediately set off a flurry of speculation about potential successors. For Anglo-Jewry, this is a crucial moment. The chief rabbi is considered the leader of the community, setting its tone and priorities, and is its most prominent face to the outside world. With the last 10 holders of the post serving for an average of 28 years each, the choice will make a real difference to a shrinking community, struggling with its place in British society amid a surge of anti-Israel sentiment and the rapid growth of an often hostile Muslim population. 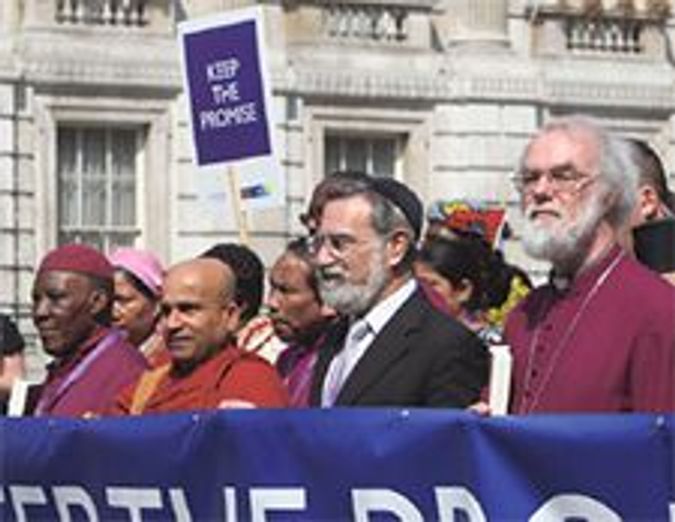 Dignity of Difference: British Chief Rabbi Jonathan Sacks (center) marches against poverty alongside other religious leaders in London in 2008. Image by Getty Imges

But do not expect another figure of Lord Sacks’s intellectual stature or prominence. Unlike in 1991, when Sacks became chief rabbi, there is no front-runner; barring surprises, the likely contenders to replace him are all competent community rabbis with little or no national profile. This is a good thing. Under Sacks and his predecessor, Immanuel Jakobovits, Britain’s chief rabbi became a figure of national, and even international, importance. But that is not what British Jews need most from their next leader.

Why does Anglo-Jewry need a chief rabbi in the first place? American Jewry, spread out over an entire continent, numbers in the millions, and exists in a culture of fierce individualism and personal choice. Anglo-Jewry, with fewer than 300,000 members, two-thirds of whom live in greater London, has always been highly centralized and lives in a culture of mild submission to authority and tradition. The archaically named Board of Deputies of British Jews is the official representative body, promoting the community’s rights and agenda to government and media, although it is a very pareve body compared to its feisty North American counterparts. The United Synagogue is an umbrella organization running the majority of Britain’s Orthodox shuls, exerting a level of control unheard of in North America.

Officially, the chief rabbi is only head of the United Synagogue, not recognized by Britain’s non-Orthodox movements, which make up about 30% of the community. And yet, despite occasional friction, he is accepted as the de facto leader because of a historical anomaly. In contrast to North America, where the Orthodox were generally the last to arrive, the Orthodox set up and always dominated British Jewry, and the more liberal movements are essentially the minor partners in the communal infrastructure.

For much of British Jewry’s history, its chief rabbis were largely inward looking, taking an active role in communal organizations and issues, with little to say to the rest of the country. The first two chief rabbis appointed in the 20th century, Joseph Hertz and Israel Brodie, were very different personalities, but — despite being in office during momentous events — both took care to keep the community in a low public profile. This began to change during the tenure of Jakobovits (in office from 1967 to 1991), whose conservative views on social issues — and his willingness to publicly espouse them — endeared him to Prime Minister Margaret Thatcher, who reportedly called him her “father confessor.” She gave him a peerage in 1988, ensuring that he had a platform in the House of Lords from which he could speak out and be heard on issues of religion and morality.

His successor, Rabbi Sacks, completed the transformation of the role of chief rabbi. Although when inaugurated Sacks promised to be a community modernizer, focusing on issues such as the role of women in Orthodoxy and “Jewish continuity,” these were soon abandoned as he found it difficult to resist pressure from the right-wing London Beth Din, Britain’s dominant rabbinic court. Stymied as a religious and communal innovator, the Cambridge University-educated Sacks found other outlets. Since taking office, the chief rabbi has churned out some 18 books on both Jewish and more general themes like interfaith coexistence and the dangers of multiculturalism, cementing his reputation as a brilliant thinker and positioning himself as Britain’s most publicly outspoken religious leader.

The non-Jewish British mainstream and, increasingly, the Jewish community in America, which Sacks has visited often over the past few years, loved his vision and oratory. For these two groups, he filled in the gap left, respectively, by the increasingly permissive and crisis-ridden Church of England and the dearth of visionary Modern Orthodox thinkers. But these constituencies were theologically and geographically at arm’s-length, and did not need Sacks’s hands-on leadership. Among the ranks of Anglo-Jewry, in ironic contrast, he has a relatively weak following.

Many British Jews feel that their community suffers from an internal leadership vacuum, with no one to tackle those same religious issues that Sacks promised to start dealing with 20 years ago, or to help them navigate the increasingly fractious rows over Israel’s policies and cross-denominational relations.

This is not to belittle Sacks’s incredible achievement in reaching a position of true national intellectual and moral leadership. Certainly, the community will continue to need a chief rabbi who is capable of defending its interests to the wider society. But the Anglo-Jewish community also has serious internal problems that need proper attention. The role of chief rabbi must be rebalanced, in favor of a leader with a steady hand who can address the community directly instead of through books.

There will be no shame in having what might seem to many outsiders like a second-rate chief rabbi in comparison to Sacks. British Jews are crying out for some leadership; this time around, the parochial must win out over the cerebral.

Miriam Shaviv is a columnist for Britain’s Jewish Chronicle.