Exit Joe: Lieberman and His Legacy 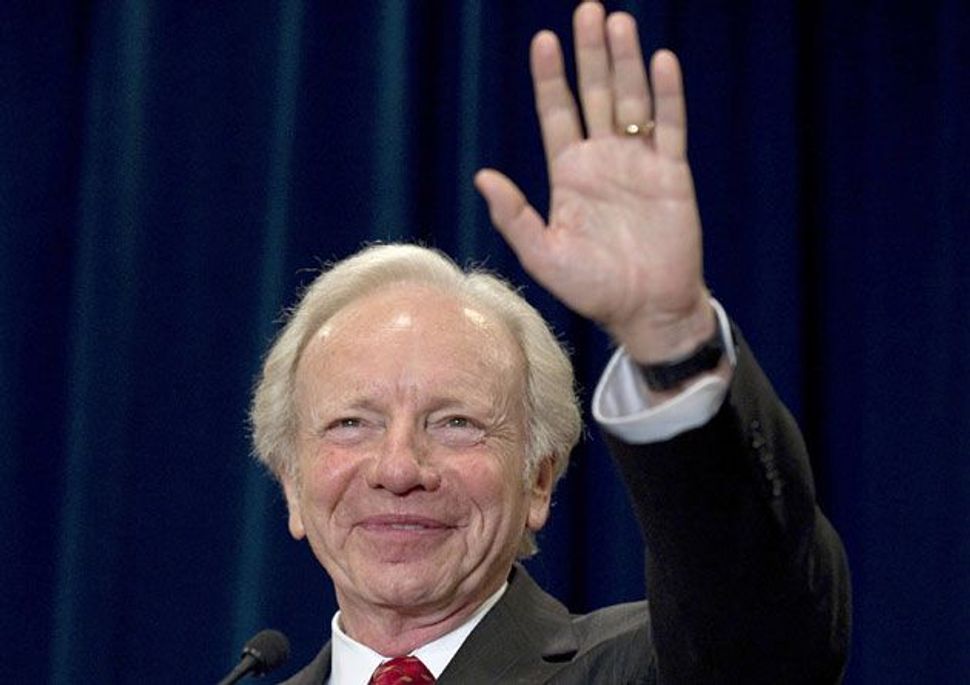 Liberals love to extol the virtues of bipartisanship. Why then do so many despise Joe Lieberman, who spent his Senate career practicing it?

On homeland security, terrorism, the environment, trade and gays in the military, among other issues, Lieberman worked with legislators of both major parties to make America safer, cleaner, more prosperous and fairer. Uniquely, Lieberman knew how to speak to a diverse assemblage of groups that make up what might be called the forgotten center of American politics: elderly Florida Jews, Northeastern Catholics, Southern Evangelicals, veterans all over the country — and Maine’s two Republican senators.

Yet he wound up a party of one, forsaken by the Democrats who had propelled him to the Senate. So much for all the lip service paid to bipartisanship.

Lieberman resembles a biblical prophet — a sometimes sanctimonious Sam disdained by his generation who’ll undoubtedly be judged by history as a visionary. The Senate will be poorer without him.

E.J. Kessler is a member of the New York Post’s editorial board and a contributing editor to the Forward.

His Moment Was Ours

American politicians recognized the importance of the Jewish vote more than 100 years ago. Yet it wasn’t until Al Gore selected Joseph Lieberman to be his running mate that we truly came of age politically.

Before Lieberman, there was a lingering sense that it was not “good for the Jews” for a landsman to be too visible on the political stage. Many felt that a Jew would never have a shot at winning national office.

One day in August of 2000 changed everything. The feeling was electric. Weeks went by and there were no mobs of anti-Semites. For a while Joe Lieberman was the face of American Jewry.

Then the Supreme Court decided there would be no Vice President Lieberman. And many Democrats grew disillusioned with Lieberman over his support for the Iraq War and for John McCain’s presidential candidacy.

Still, the significance of that moment remains. It forever transformed the way that Jews feel about our place in American society.

Ira N. Forman, a former executive director of the National Jewish Democratic Council, is research director for The Solomon Project and co-editor of its book “Jews In American Politics” (Rowman & Littlefield, 2001).

Joe Lieberman is the last Democrat upholding a noble tradition that began with Roosevelt and continued through the presidencies of Truman, Kennedy and Johnson and the illustrious Senate career of Henry “Scoop” Jackson. They embodied domestic policies serving the common man and foreign policies resting on the truths that America was a virtuous country facing monstrous, unappeasable enemies, first the Axis, later the communists. Thus, it was understood that America needed to make no apologies for defending itself, and its exertions abroad generally benefited the commonweal.

Starting with the 1972 nomination of George McGovern, the Democratic Party abandoned this view. What began as an insurgency within the party hardened into an orthodoxy from which dissent was perilous. Only Lieberman has dissented consistently and unabashedly, and paid the price, marking him as a politician of rare courage and principle. That he has conducted himself throughout with warmth, directness and respect marks him also as a fine human being.

Joshua Muravchik is a fellow at Johns Hopkins University’s School of Advanced International Studies and author of “The Next Founders: Voices of Democracy in the Middle East” (Encounter Books, 2009).

I’m tired of hearing about how Joe Lieberman is a path-breaker and a credit to “the Jews.” I’ve never been a fan, and I don’t think he has served our community well or represented us accurately.

My problem with Lieberman is embodied by the nickname his critics have given him: “Holy Joe.” I think “Holier-than-thou-Joe” would be more precise.

Not only has the senator’s public moralizing ruptured the wall between church and state — which most American Jews consider inviolate if our rights are to be protected from “the tyranny of the majority” — but his pandering to conservative and fundamentalist forces, his showy religious self-identification, smug pomposity and priggish sanctimony have seriously misrepresented the politics and practices of the greater part of the American Jewish population. I’ll be glad to see him go.

Letty Cottin Pogrebin is a founding editor of Ms. Magazine and the author of nine books.

With his political career at an end, the main tragedy of Joe Lieberman’s time in office may very well be the result of his having had the misfortune of being born in Connecticut.

Democrats are a pragmatic lot, and much could be forgiven from a sometimes heterodox, oft-annoying but mostly liberal senator from, say, Louisiana or Indiana or Virginia or North Dakota. But from a state that last voted for a Republican presidential candidate in 1988, Democrats expect something more — a party loyalist or a progressive hero or at least a time-serving non-entity. But Lieberman couldn’t even seem to bring himself to pretend to like the Democratic base.

Now that Lieberman is passing from the scene, it’s possible for progressives to see the integrity in this. Realistically, though, we’ll be much happier with his successor, who will likely be a less interesting but more congenial brand of Northeastern Democrat.

Matthew Yglesias is a fellow at the Center for American Progress Action Fund and author of “Heads in the Sand: How the Republicans Screw Up Foreign Policy and Foreign Policy Screws Up the Democrats” (Wiley, 2008). He blogs at yglesias.thinkprogress.org.

Joe Lieberman is a path-breaker not only for Jews, but also for Judaism. He showed his fellow Americans that one can be both a traditionally observant Jew and, at the same time, a fully engaged citizen and public servant. With grace and dignity, he skillfully navigated between the religious and secular worlds, elevating the image of Judaism in the process.

Lieberman’s commitment to Torah informed much of what he did, including in public policy. He spoke the language of faith and lived his faith publicly, making him a role model for Jews and non-Jews alike. In particular, he showed that it was possible to observe the Sabbath while fulfilling his duties as a senator.

Lieberman has recounted how, during the 2000 election, Al Gore told him he admired how he could disengage and contemplate on Shabbat and wished he could do the same on Sunday. “It’s okay,” Lieberman quipped, “I’ll watch the country on Sunday. You watch it on Saturday.”

Exit Joe: Lieberman and His Legacy