The Gipper’s Gift: A Pro-Israel GOP 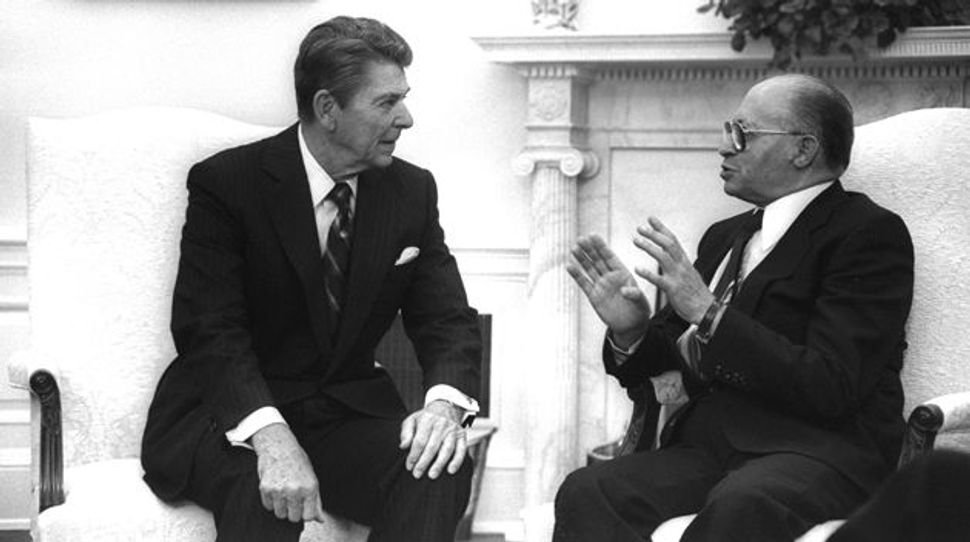 As America marks the 100th anniversary of Ronald Reagan’s birth, we will be remembering one of our country’s greatest leaders with speeches, tributes and television specials. Friends of Israel will have a special reason to celebrate: Reagan made the Republican Party into the unambiguously pro-Israel party that it is today.

Indeed, before the Reagan era, the Republican Party had a decidedly mixed record on Israel. In the 1940s and early 1950s, the conservative movement had strong isolationist and even anti-Semitic tendencies. Later, Republican presidents, such as Dwight Eisenhower and Richard Nixon — while by no means isolationists — had complicated relations with the Jewish state. Eisenhower forced Israel to return the Sinai to Egypt after capturing it in 1956. During the 1973 Yom Kippur War, Nixon wasted precious days before finally re-supplying a tapped out Israel with arms.

Reagan, by contrast, had staunchly pro-Israel views. These were informed by his perception of Israel as an important American ally in the Cold War and his identification with Israel as a vibrant democracy.

“Only by full appreciation of the critical role the State of Israel plays in our strategic calculus can we build the foundation for thwarting Moscow’s designs on territories and resources vital to our security and our national well-being,” Reagan said. As Mitchell Bard, executive director of the American-Israeli Cooperative Enterprise, has noted: “Ronald Reagan was the first President to state explicitly that Israel was a strategic asset to the United States.”

But for Reagan, America’s friendship with Israel wasn’t only a matter of strategic calculus. As Reagan said in his 1980 campaign, “Israel represents the one stable democracy sharing values with us in that part of the world…. I think we should make it plain that we are going to keep our commitment to the continued existence of Israel.”

This sort of talk was music to the ears of neoconservatives, many of whom had backed Jimmy Carter in the 1976 election only to grow disillusioned. Reagan gave pro-Israel neoconservatives, such as Jeane Kirkpatrick and Elliott Abrams, prominent roles in his administration. Kirkpatrick, in particular, defended Israel from her perch as American ambassador to the United Nations. The neoconservatives helped give Republican foreign policy a pro-democracy emphasis that it often lacked in the era of Kissingerian realpolitik, permanently altering the way that Republicans related to Israel and its conflicts with its undemocratic neighbors.

Of course, not every action by the Reagan administration was pro-Israel. Reagan supported the sale of AWACS planes to Saudi Arabia over Israel’s objections, and he shortsightedly condemned Israel’s destruction of Iraq’s Osirak nuclear facility. He also displayed genuine anger with Israeli Prime Minister Menachem Begin over Israel’s invasion of Lebanon. But all of these incidents took place within the context of Reagan taking the U.S.-Israel relationship to a place of genuine friendship.

After some hiccups during the first Bush administration, Republicans have drawn on their Reaganite inheritance and become a reliably pro-Israel party. The post-1994 Republican Congress regularly backed Israel on both substantive and symbolic issues. After 9/11, the Reaganite view that Israel is on the side of democracy in the struggle against the forces of tyranny secured an uncontested place as a central pillar of Republican foreign policy. President George W. Bush was so supportive of Israel that his mother reportedly joked that he was “the first Jewish president.”

A visit to Israel is now a rite of passage for prospective GOP presidential candidates (which is remarkable given that so few Jews vote in the Republican primaries), with Mitt Romney recently undertaking such a pilgrimage. At the grassroots level, according to a Gallup poll last year, 85% of Republicans say they support Israel over the Palestinians, compared to slightly less than half of Democrats — this despite Jewish voters’ longstanding alliance with the Democratic Party.

Some might counter that Republican support for Israel is simply a byproduct of the Evangelical community’s affection for the Jewish state. Others might argue that America’s alliance with Israel was always set in stone. But the strength of the American-Israeli alliance, and in particular the passionate Republican support for this relationship, are in fact more recent achievements. And we have Reagan to thank for them.

Just as Reagan knit together the diverse strands that today make up the Republican Party’s base — social conservatives, national security conservatives, fiscal conservatives and neoconservatives — he also took the passions of these constituencies and wove them into a seamless fabric of support for Israel. As we celebrate this great American’s centennial, those of us who care about Israel owe him our enduring gratitude.

Tevi Troy, a senior fellow at the Hudson Institute, served as a senior White House aide under President George W. Bush. He is the author of “Intellectuals and The American Presidency: Philosophers, Jesters, or Technicians?” (Rowman & Littlefield, 2002).

The Gipper’s Gift: A Pro-Israel GOP