Bush’s Bluffing Has Made Mideast Peace a Bad Bet 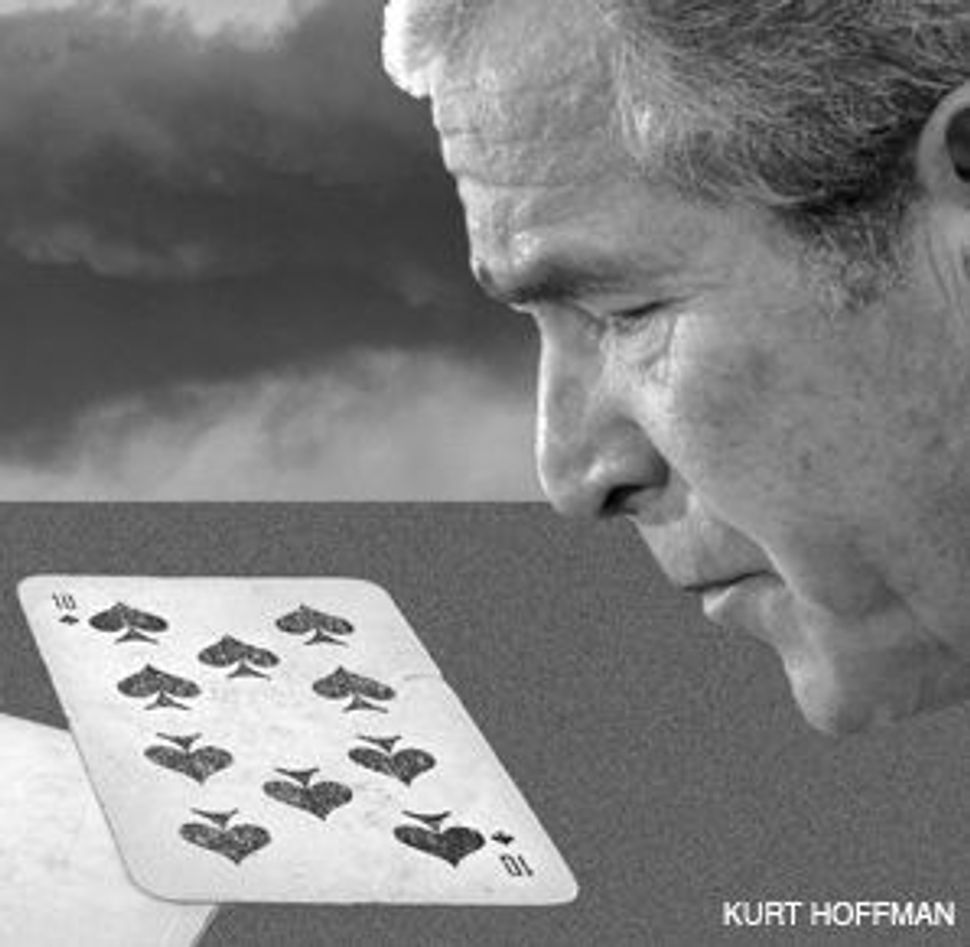 From Taba to Tony, from the Rose Garden to Riyadh, from Geneva to Gaza — in the history of the Israeli-Palestinian conflict, no American president has been presented with more opportunities for reaching a true and lasting peace than George W. Bush. But with just a half a year to go before he leaves the White House and little indication of a breakthrough, it is all but certain that Bush will leave behind a conflict more intractable than ever, not to mention a situation in Gaza that ranks as the world’s third-largest humanitarian crisis after Somalia and Darfur. 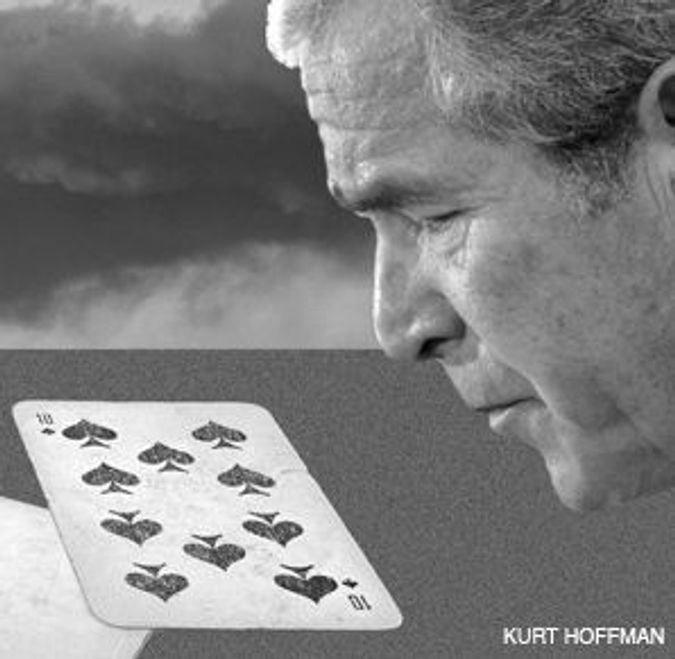 This is more than just an exercise in historical finger pointing. When the 44th president of the United States is sworn in next January, he will inherit a legacy of failed chances at Middle East peacemaking. To borrow a phrase from Abba Eban, the president has never missed an opportunity to miss an opportunity — to be exact, 21 opportunities over the past eight years to end the Israeli-Palestinian conflict. Twenty-one: That’s blackjack, with no jackpot.

The next president, be it John McCain or Barack Obama, would do well to revisit those missed chances, for they offer an instructive lesson: American diplomacy in the Middle East needs to be about more than lofty rhetoric and half-baked initiatives — it needs to be about strategically pursuing the path of peace, supporting those that seek peace and following through on the necessary steps to achieve peace.

1 — Taba Summit, January 2001: As Bill Clinton left office and Bush assumed it, the Israeli and Palestinian negotiation teams met in Taba, Egypt, to continue what was started in 2000 at Camp David. The summit dealt with final-status questions and were by far the most robust, complete and hopeful talks between Israelis and Palestinians since Oslo.

2 — Mitchell Report, April 2001: While the second intifada raged on, former Senator George Mitchell headed a fact-finding mission whose report outlined a set of confidence-building measures to end the intifada, stop settlement expansion and bring the parties back to the negotiating table.

3 — Tenet Plan, June 2001: CIA Director George Tenet, hoping to solidify the recommendations of the Mitchell Report, went to Jerusalem to detail a security plan to end the violence and resume negotiations.

4 — Arab Peace Initiative, March 2002: The initiative, also known as the Saudi Peace Initiative, was a watershed in peacemaking efforts. Based on Security Council resolutions 242 and 338, the Arab League unanimously agreed to normalize relations with Israel as the outcome of a negotiated two-state solution. It also included a reference to an agreed-upon solution to the question of Palestinian refugees, signaling that Israel’s objections to a massive return of refugees were beginning to find acceptance in the Arab world.

5 — The Madrid Quartet, April 2002: A quartet of Middle East mediators was constituted with the purpose of multi-lateralizing the Israeli-Palestinian peace process. It combined the political superpower of the United States with the financial backing of the European Union and the international legitimacy of the United Nations, as well as with the balancing influence, as seen through Arab eyes, of Russia.

6 — Rose Garden Speech, June 2002: Bush, to the surprise of many, became the first American president to openly state that a major American foreign policy objective would be to support and bring about a two-state solution and an end to Israeli occupation. A trailblazing speech, it signaled that some in the White House were beginning to understand the significance of the American role in the conflict.

8 — Road Map for Peace, April 2003: Based on the parameters set out by Bush’s Rose Garden speech, the Madrid Quartet developed a comprehensive plan, with the goal of delivering an independent Palestinian state living side-by-side in peace with a secure Israel.

9 — U.N. Security Council resolution 1515, May 2003: The resolution affirmed unanimous international support for the Quartet’s Road Map for a permanent two-state solution to the Israeli-Palestinian conflict.

10 — Geneva Initiative, December 2003: Drafted by former Israeli negotiators and their Palestinian counterparts, the Geneva Initiative maps out in comprehensive detail a blueprint for a permanent status solution to the Israeli-Palestinian conflict, with goals based on the parameters spelled out at Camp David, as well as on the Road Map and the Arab Peace Initiative. While not an official document, most credit it as the impetus for Israel’s withdrawal from Gaza in 2005.

11 — James Wolfenshohn appointed envoy, April 2004: The former World Bank president was appointed as the Quartet’s special envoy for Israel’s Gaza disengagement. An American Jew trusted by both Israel and Washington, Wolfensohn would resign his post in 2005 in deep disappointment at the way the Bush administration systematically undermined his efforts.

12 — Death of Yasser Arafat, November 2004: While Arafat was revered by Palestinians as the founder of the Palestinian Liberation Organization and Palestinian national movement, his death also entailed an enormous opportunity for change and for greater democratic governance for Palestinians.

13 — Mahmoud Abbas elected president, January 2005: A non-violent pragmatist and long-time advocate of negotiations, after being elected he immediately called for an end to the intifada, a cessation of the armed struggle for independence and the resumption of peace negotiations with Israel.

15 — Gaza disengagement, August 2005: The disengagement showed that Israel was capable of and willing to cease its settlement enterprise and withdraw from Palestinian territory. But instead of building momentum for a further withdrawal of settlers from the West Bank and reviving peace talks, the Bush administration expressed understanding for Israel’s painful domestic struggle and rewarded Sharon with the promise that existing demographic realities in occupied territory would be taken into account in eventual final-status talks.

16 — Agreement on Movement and Access, November 2005: Secretary of State Condoleezza Rice negotiated an 11th-hour agreement to improve Palestinian living conditions by creating parameters for better movement and access for Palestinians. The main purpose was to re-open the Rafah border crossing from Gaza to Egypt, a fundamental precondition for a peace deal. The border remains closed.

17 — Baker-Hamilton Commission, May 2006: James Baker and Lee Hamilton’s commission, officially known as the Iraq Study Group, opened up the previously taboo “linkage” discussion by arguing that the “United States will not be able to achieve its goals in the Middle East unless the United States deals directly with the Arab-Israeli conflict.”

18 — Prisoners Document, June 2006: Palestinian prisoners held by Israel from groups including Fatah, Hamas, Islamic Jihad, the Popular Front for the Liberation of Palestine and the Democratic Front for the Liberation of Palestine drafted a “National Reconciliation Document.” The signatories agreed to a two-state solution based on the 1967 borders, marking a potentially crucial opportunity to co-opt Islamist militants and create a broad Palestinian consensus in favor of negotiations and territorial compromise.

19 — Mecca Agreement, March 2007: To address the emerging crisis between Hamas and Fatah in the West Bank and Gaza, Saudi Arabia convened national unity talks in Mecca to hammer out a unity government. Instead of embracing the accord, the Bush administration reportedly engaged in a clandestine effort to arm Fatah strongman Muhammad Dahlan against Hamas, which reacted with a military takeover of Gaza that June.

20 — Tony Blair appointed envoy, June 2007: The former British prime minister, with his high profile and stature, was tasked with improving Palestinian governance, economics, and institution–building. While Washington supported Blair’s involvement, the State Department made clear his mandate did not include that of peacemaker.

21 — …and blackjack, November 2007: Bush convened a major summit in Annapolis, Md., and coaxed Israelis and Palestinians into a commitment to try to reach an agreement by the time he left office in January 2009. Six months later, the president has yet to deliver any real progress.

Bush’s Bluffing Has Made Mideast Peace a Bad Bet