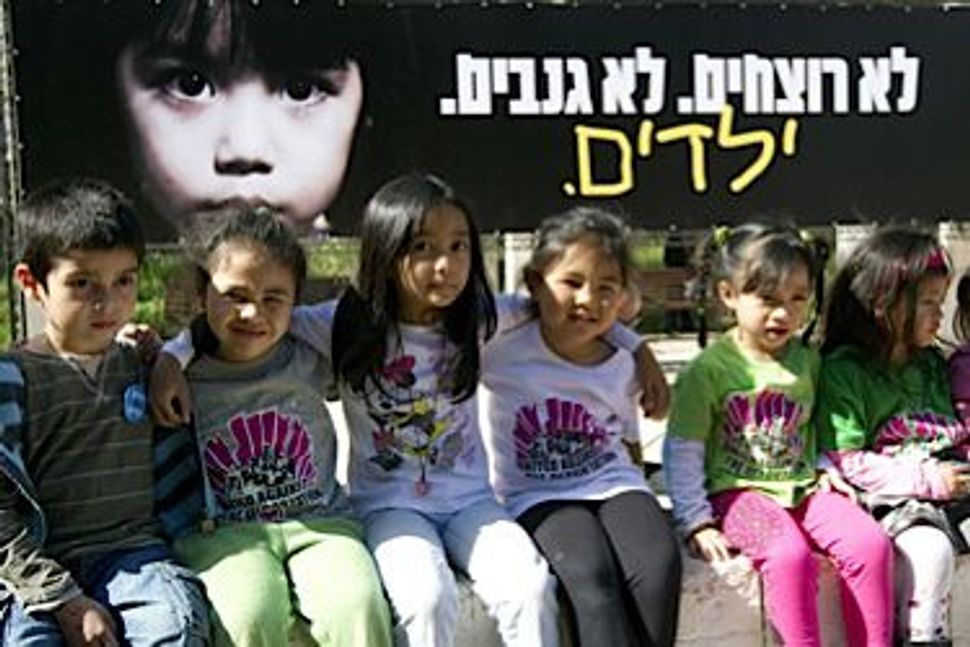 They Want To Stay: Children participate in a March 4 demonstration in Tel Aviv against deportations. Image by getty images

When I received an Oscar this past February for my short documentary, “Strangers No More,” I naively thought it would put a nail in the coffin of the idea of deporting the children of immigrant workers in Israel.

The film followed a year in the life of the Bialik-Rogozin School in southern Tel Aviv, a school comprised largely of the children of immigrant workers, its students hailing from 48 countries. Many of the children are fleeing economic distress, political adversity and even genocide. Their parents work very hard for minimal pay, some have arrived in Israel formally seeking refugee status — all are seeking a better life. With tremendous effort and dedication, the Bialik-Rogozin School provides the support these children need to recover from their pasts and rise above their present circumstances. The film portrayed the school as a haven of multicultural diversity. 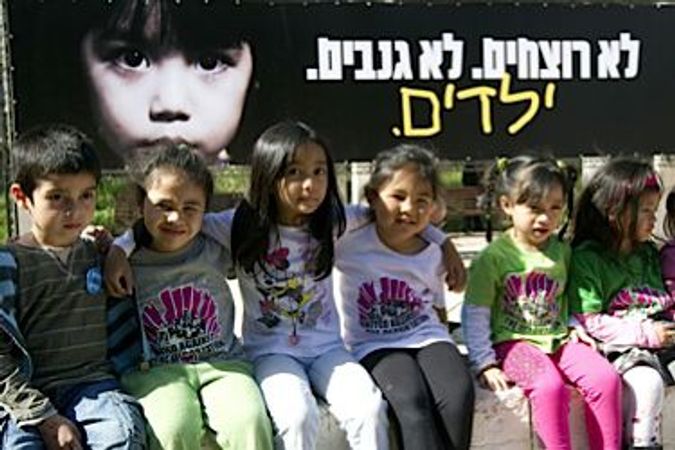 They Want To Stay: Children participate in a March 4 demonstration in Tel Aviv against deportations. Image by getty images

At a screening of the film at the Tel Aviv Cinematheque this past January, a former Israeli ambassador to the United Nations, Dan Gillerman, said, “There can be no better hasbara [public diplomacy] than this movie, to show what type of country we are and what type of country we can be.” At the same screening, former prime minister Ehud Olmert emphatically stated: “We must not allow these children to be deported.”

When the idea of deportation of the children of foreign workers first became public last August there was an outcry from both Israelis and American Jewish leaders. Abraham Foxman, national director of the Anti-Defamation League, standing in the courtyard of the Bialik-Rogozin School, pleaded, “Everything about the values of Israel and the Jewish people screams to us: Do not send these children away! The biblical injunction to treat the stranger in your midst as you treat your own rings loud and clear.” Elie Wiesel lamented, “I find it hard to believe that such a thing is happening in Israel.”

There were demonstrations, and the fate of these children was front-page news in Israel. By the time my co-filmmaker, Karen Goodman, announced from the stage of Hollywood’s Kodak Theater, “Through education, understanding and tolerance, peace really is possible,” the battle appeared to be won.

It turned out to be only a temporary stay, just long enough to allow the media glare to go elsewhere. By late March, the Interior Ministry began deporting some families with infant children. The ministry has been clever to keep its mission off of the media’s radar, deporting one family, then waiting a couple of days and deporting another. Although the ministry is starting with families whose children are too young to attend school, it has only postponed for a period of months its plans to deport the school-age children.

One of the stars of “Strangers No More” is a courageous and charming 12-year-old named Esther Aikphae. Esther fled South Africa with her father after her mother was murdered. She arrived in Tel Aviv not knowing a word of Hebrew. She has been in Israel for four years and is a model student but is one year short of the five required by the Interior Ministry in order to remain in the country. Because Israel refuses to recognize someone born in South Africa as a refugee, come the end of the current school year she will be put on the list for deportation. Like many of her schoolmates, Esther now considers herself an Israeli; as she poetically puts it, “I dream in Hebrew.”

I’m not sure why Israel’s interior minister, Eli Yishai, is so set against having these children remain in the country. How exactly are they a threat to Israel’s future? Can’t they be embraced on humanitarian grounds? At most, the fates of 400 to 600 children are at stake; including their family members we’re talking about no more than 1,500 people in a country of 7.7 million. It would be very simple to give these children amnesty.

“Strangers No More” will have its world television premiere when it airs nationally in Israel on April 25, the last day of Passover, the “Festival of Freedom.” Perhaps the broadcast will help bring the discussion of the planned deportations back to the front pages. Whenever the film is screened in America at film festivals and synagogues, audiences are shocked when they hear of the deportations. In this instance, we can only hope that Israelis have a similar reaction — and raise their voices so as to avert a great humanitarian blunder.

Kirk Simon is the co-producer and co-director, with Karen Goodman, of “Strangers No More.” It won the 2010 Academy Award for “Documentary Short Subject.”