When the Zionist Right Was the Scorned Side 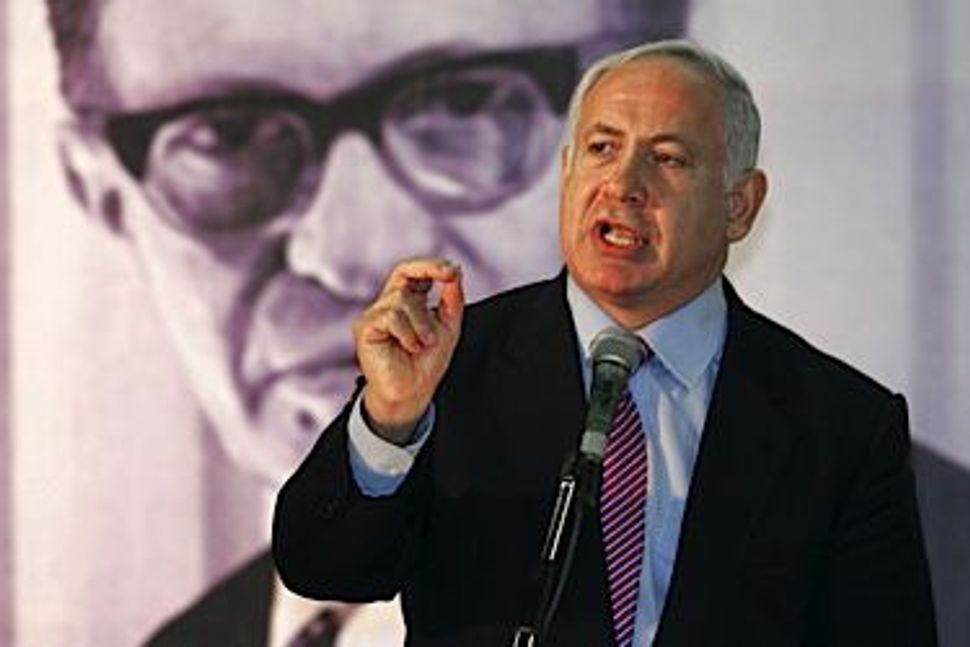 Generation to Generation: Benjamin Netanyahu speaks to the Likud Party?s Central Committee in September 2005, standing in front of an image of former prime minister Menachem Begin. Image by getty images

As I witness the outpouring of invective directed by some American Jews against members of their own community over Israel, I have a feeling of déjà vu. I wonder if those supporters of the current Israeli government who label everyone who disagrees with them as anti-Zionists or traitors realize that they are repeating sins committed against their predecessors in earlier days, when David Ben-Gurion’s Mapai faction largely controlled the Israeli establishment and its messengers abroad.

Powerful divisions among American Jews over Israel are not new, though they were downplayed for a long time during the early decades of the State of Israel. I think most American Jews had little idea that this image of unity was the product of some heavy-handed smothering of views that did not conform to Labor Zionist orthodoxy. But I was very aware of this because my father, Arye Rozenson, had been a member of Lochamei Herut Yisrael, the underground group that fought against the British Mandate in Palestine, along with the larger and better-known Irgun Tzvai Leumi, led by Menachem Begin.

The leadership of the Jewish Agency, which saw the Irgun and the Lehi as political and military rivals beyond its control, routinely portrayed them as fascist maniacs, in contrast to the heroes of the Haganah. In my house, the joyful recollection of the founding of the Jewish state was mixed with bitterness over Ben-Gurion’s calumnies and his efforts to keep the Irgun and Lehi out of the historical record.

After my father died, I found some evidence of how this conflict extended to the American Jewish community. Among his papers, I found a revealing exchange of letters between my father and Ben Hecht, the author, playwright and one of the greatest Hollywood screenwriters (“Scarface,” “Notorious” and many other classics). He was also known for his tireless efforts to bring Jewish refugees escaping Nazi-controlled Europe into Palestine in defiance of the British government.

Hecht was recruited to this cause by Hillel Kook, the leader of Irgun activists in America and founder of the Emergency Committee for the Rescue of European Jewry and similar groups. Because of their ties to the Irgun, these organizations were denounced both by quietist Jewish leaders in America as well as by the Labor Zionist leadership in Palestine.

In 1962, my father (who was living in the United States at the time) wrote to Hecht on behalf of Jacob Bannai, a former Lehi commander who had published his memoir “Unknown Soldiers” in Israel, and was exploring the idea of publishing a translation in America. Knowing Hecht’s political sympathies and figuring that he had some influence with American publishers, my father asked him for help. Hecht’s response was as follows:

I am the wrong person to be of help to Jacob Bannai’s getting published in the U.S. My own writings on Israel, Ben Gurion, etc., have alienated most of the American publishing firms. Simon and Schuster, once my publisher, refused to read my new book, let alone publish it. This is because Mr. B. Gurion’s Zionist and Jewish Agency forces in the U.S. plus his Israeli representatives have (for the time) “frightened” most of our important Jews into repudiating me.

The previous year, Hecht had published “Perfidy,” his denunciation of Rudolf Kastner, a Jewish leader in Hungary who negotiated with the Nazis in 1944 and 1945. Many viewed the book as an implicit indictment of the Zionist leadership’s failure to evacuate more Jews before and during the war. That book, coupled with Hecht’s other political writings and associations, were apparently enough to trigger a campaign to stifle him.

Those who admire Ben-Gurion but are unfamiliar with the politics of the early days of the State of Israel might wonder whether Hecht was exaggerating. But Ben-Gurion’s fear and suspicion of his right-wing rivals ran very deep. He used his influence to control the narrative of Israel’s founding, in the process suppressing the role played by the Irgun and Lehi. He even refused to allow the reinterment in Israel of the remains of Ze’ev Jabotinsky, the founder of the Betar movement and Begin’s mentor. (Jabotinsky’s remains were moved from New York to Mount Herzl in 1964, after Ben-Gurion stepped down as prime minister.)

After Begin and his right-wing Likud party won the national election in 1977, the historical record in Israel and abroad was corrected (arguably even over-emphasizing the contribution of Irgun and Lehi). In 1980, my father and his comrades-in-arms in Lehi were finally awarded service ribbons by the Ministry of Defense for their role in fighting for the creation of the state — 22 years after Haganah members were similarly recognized.

A great deal of bitterness lingered among that generation of freedom fighters. As they saw it, they were loyal Zionists working for a common cause. After all, upon the founding of the state, fighting units of every political stripe were folded into the Israel Defense Forces. Begin and his supporters ran for the Knesset and became the loyal opposition. They did not deserve to be treated as pariahs.

Today, to a large extent, the shoe is on the other foot — the Likud and its allies control the government, and the Labor Party, the inheritor of Ben-Gurion’s mantle, is in disarray. And now Jews both in Israel and America are once again tarred as dangerous and subversive when they disagree with the Israeli government’s policies and pronouncements. There are, of course, Jews with every possible point of view on Israeli-Palestinian relations, and there are views at both extremes that are utterly deplorable. But I’m talking about opinions that are not at the extremes, but are reflected in mainstream Israeli politics.

We can discuss the Palestinian issue and the future of Judea and Samaria without demonization. I would urge Likud supporters to treat their fellow Zionists better than their predecessors were treated in the past.

David Rozenson is a lawyer and writer who lives in Newton, Mass.

When the Zionist Right Was the Scorned Side