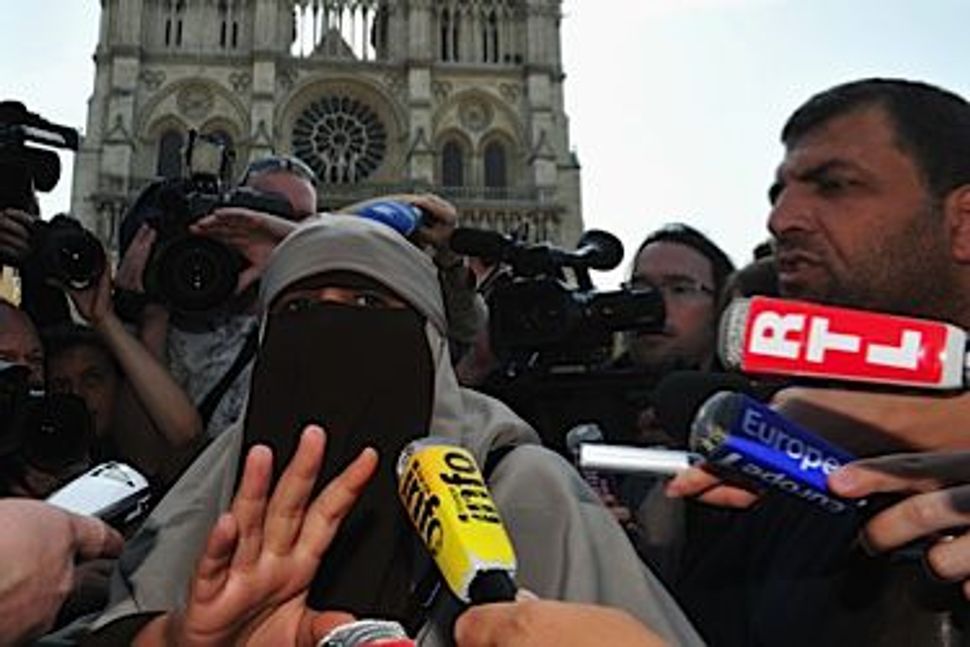 French Fashion? Kenza Drider speaks to the media in front of Paris?s Notre Dame Cathedral on April 11, defying a new French law banning the wearing of full-facial veils in public. She became the first person arrested under the new law. Image by getty images

Israel, and particularly its rabbis, could learn from France’s ban on face veils. With this new law France has made a powerful statement about the level of integration it expects from Muslim citizens, and about the status of women in its society.

Israel’s religious sector needs to make similar statements. The target would not be the country’s Muslim citizens, very few of whom wear face veils (though exact numbers are unknown), but the bizarre and dangerous cult of Jewish women who have recently taken it upon themselves to wear burkas and other forms of face veils. They must be stopped in order to prevent the practice spreading to mainstream Haredi society.

The phenomenon was virtually unknown to the general public before 2005, when a strictly Orthodox man appealed to a Jerusalem rabbinic court for a divorce because his wife had taken to covering her entire face — including her eyes — “for reasons of modesty.” The rabbis granted his request, concluding that the woman suffered from a “serious mental disturbance.”

It soon emerged, however, that she was only one of around 100 women who followed Bruria Keren, a religious teacher from the ultra-Orthodox town of Ramat Beit Shemesh. Keren preached extreme modesty, dressing in more than 10 layers of clothes and covering her face entirely on the rare occasions she left home.

In 2009, the “Taliban mother,” as she was dubbed by the Israeli press, was convicted of aggravated assault against several of her 12 children. But even her four-year sentence did not deter her followers.

Today, similar groups have enough members in Ramat Beit Shemesh and Jerusalem to support at least two schools. Ultra-Orthodox girls as young as 6 have been photographed with their mothers, all dressed in Muslim-style burkas, dubbed “frumkas” (a play on the Yiddish word for Orthodox, frum). Many others have adopted a shal, or loose cloak, also favored by Keren.

In recent weeks, some of the women released a video pleading for understanding, claiming they were simply reclaiming a centuries-old mode of Jewish dress and were just ‘normal’ women trying to live humbly.

Indeed, unlike many Muslim women, the Jewish burka-wearers have taken on the covering voluntarily — often opposed by their husbands. Does this mean that it is entirely their choice? No. They are merely taking to its logical conclusion one of the defining — and undoubtedly male-driven — trends in Haredi society, the increasing emphasis on female modesty in dress.

High necklines, thick stockings (never flesh-colored, unless they include a seam), long sleeves — all these are a given. Nowadays, women are being asked to wear rubber soles so as not to distract the men with the sound of heels, are forbidden to wear slits in even long skirts and cannot be pictured in the Haredi press. Is it any wonder that some women absorbed the message that to be pious, they had to cover up everything?

But why worry about these women, who only number in the hundreds? The answer is that if there is one lesson to be learned from Haredi history, it is how easily even extreme stringencies can quickly become the norm, as members fear being seen as “lenient.” Separate sidewalks for men and women used to be the punch line to a joke; now they actually exist in Bnei Brak and (sporadically) in Jerusalem. Gender-segregated buses have turned, within five years, from a rarity to a cause célèbre.

If we are not careful, social pressure to appear more frum will result in more Haredi women being forced — this time, against their will — into submitting to this new standard, their interpersonal interactions hindered, their social status reduced yet further. It will begin on certain streets and spread to entire neighborhoods.

The answer is not formal legislation, as in France. The burka women would not listen to secular authorities, and a bill outlawing them might unite the Haredim behind the “persecuted” modesty-seekers. It would also unnecessarily antagonize the Muslim population.

So far, rabbinic opposition to the new dress code has been tepid, with just one statement by the Edah Haredit condemning face veils, but in the context of a call for the “strengthening of modesty”, and other condemnations signed mainly by rabbis without national influence. It is time for the other senior Haredi rabbis to issue a clear-cut halachic ruling against this noxious cult, and follow up as necessary. After all, it was their own gender policies that unleashed the “hyper-modesty” craze.

If they do not act soon, and encourage all their followers to temper their obsession with female modesty, the law of unintended consequences will kick in, and they may find their own granddaughters dressed in burkas.

Miriam Shaviv is a columnist for Britain’s Jewish Chronicle.