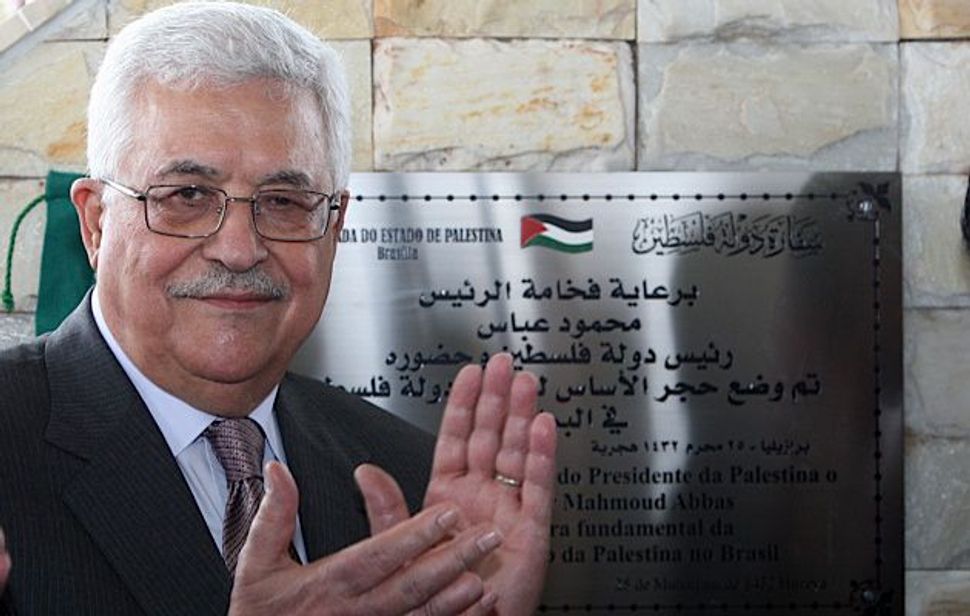 Getting Recognized: Palestinian President Mahmoud Abbas participated in a ceremony laying a cornerstone for a new embassy in Brazil?s capital on December 31, 2010. Brazil has recognized a Palestinian state. Image by getty images

This threat has led some Israelis and some of Israel’s supporters to call for a preemptive Israeli peace initiative, to suggest making concessions on the ground or even to propose that Israel itself recognize a Palestinian state before September. Israel, however, would be making a mistake if it decides to bend under the threat of a diplomatic debacle.

Instead, Israel should move from defense to offense, and take the initiative to launch its own broad diplomatic campaign to delegitimize unilateral Palestinian steps and argue for Israel’s just and legitimate insistence on a negotiated solution to the Palestinian issue. The first part of this campaign should be to assert both the legal and the practical arguments against any recognition of Palestinian statehood without Israeli agreement.

For starters, it is important to stress that any U.N. General Assembly resolution recognizing a Palestinian state would be of dubious legality. The General Assembly certainly would not be within its rights to recognize the 1949 armistice lines as the border between Israel and a Palestinian state. The 1949 armistice agreement that ended hostilities between Israel and Jordan explicitly stated that the armistice lines “are agreed upon by the Parties without prejudice to future territorial settlements or boundary lines or to claims of either Party relating thereto.” The U.N. cannot simply declare the 1949 armistice lines to be the basis for a political border, which must instead be negotiated between the parties.

Beyond legal arguments, Israel should note the practical considerations that call into question the wisdom behind recognition of a Palestinian state. Since 1993, moves by Israel or the international community to accommodate Palestinian aspirations have brought about the radicalization of Palestinian politics, sentiments and behavior. The recognition of a Palestinian state outside of the context of a negotiated agreement would only perpetuate this pattern. Moreover, without first addressing the problem of Hamas’s power within the Palestinian political system a Palestinian entity could become a haven for terrorism. This is especially true since the fall of Hosni Mubarak’s regime due to the possible strengthening of the Muslim Brotherhood, with which Hamas is affiliated.

Israel must clearly tell the international community that any move toward recognizing a unilateral declaration of Palestinian statehood not only damages the sanctity of international legal foundations that give Israel the confidence to take risks for peace, but also promises to radicalize Palestinian politics and send the situation into a destabilizing and eventually uncontrollable escalation. This would guarantee greater violence and further undermine what residual hopes there may be for any meaningful move toward reconciliation between Israel and the Palestinians.

Sadly, it is doubtful that reasoned arguments such as these will sway most members of the U.N., many of which have little regard for any sort of rule of law. But those countries are not the initial audience that Israel needs to convince.

Israel must first mobilize its supporters in the United States — which include the majority of both parties in Congress. The United States needs to send a clear message that any push for Palestinian statehood at the U.N. would not only poison American relations with the Palestinians but would also serve to delegitimize the U.N. itself.

While the Obama administration would likely be hesitant to level such harsh criticism at the U.N., congressional pressure, as well as pressure from the president’s own party’s leadership, would exert a strong influence in the year before an election. Israel’s supporters must encourage the administration to act forcefully to stall this effort, and remove from its option of passively sitting on the sidelines while faintly voicing unconvincing support for Israel.

Israel itself should further make clear that if imposed steps lacking legal foundation become the name of the game for the international community, then it will be forced to act outside of the framework of the peace process as it has been defined since 1993. It should warn that it would respond to a unilateral declaration of Palestinian statehood by moving to secure such territories as it deems vital for its defense — including by contemplating annexation of such areas.

It may not come to that, but the threat hopefully will cause reconsideration of the wisdom of pushing Israel into such a corner. Still, it should not be an empty bluff. Israel should be prepared to act, and act with conviction, if pushed. It should secure as soon as possible legislated congressional support for such a move so that it is not seen as an emotional Israeli reaction of pique, but as a reasoned, well-planned and determined strategic counteroffensive done in coordination with a broad spectrum of American political leaders and constituencies.

The main thing is for Israel to insist that this episode is not an ambiguous and evolutionary development in a peace process, but a decisive showdown, in which every friend of Israel is now needed to come to assist. Even the president must be put on the spot and forced to choose a side here.

Israel cannot hope to convince and mobilize even its friends unless it stops acting as if it is in the wrong. Preemptive concessions and rear-guard maneuvers only cause Israel to further lose legitimacy. Israel needs to change the world’s expectation that it will react with accommodation to every demand or move taken against it. Israel must behave in a way that will galvanize and energize its supporters abroad for what may amount to one of the most important fights for its legitimacy to date.

Meyrav Wurmser is a founding member of the Delphi Global Analysis Group and a senior fellow at the Hudson Institute.