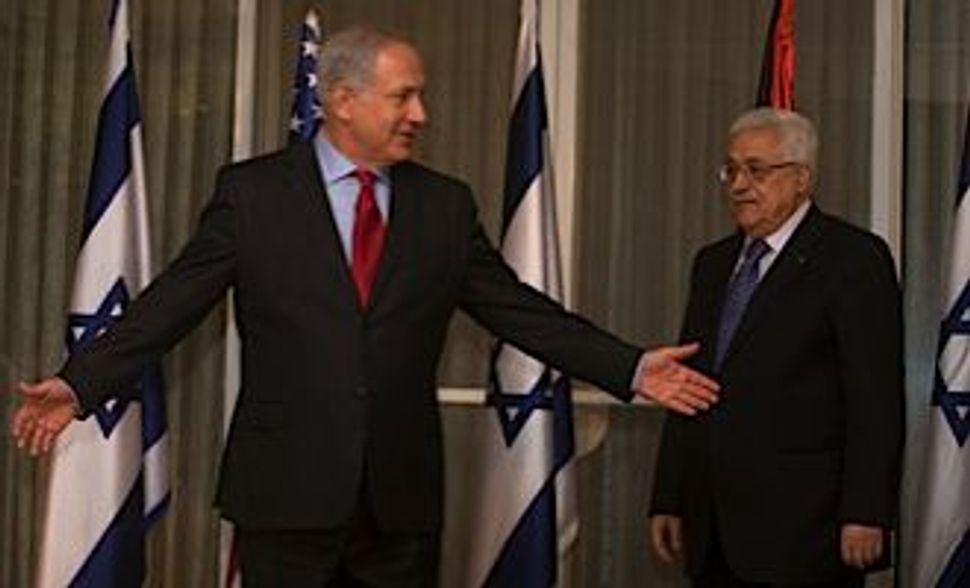 Missed Opportunity? Negotiations between Israelis and Palestinians, such as this September 2010 meeting between Benjamin Netanyahu and Mahmoud Abbas at the prime minister?s residence in Jerusalem, have not yielded an agreement. Image by Getty Images

This is a bit complicated, but it’s very important, so try and keep up. We’ll take questions afterward.

Israel faces a grave diplomatic crisis this fall. The Palestinians are planning to demand recognition from the United Nations General Assembly as a sovereign state within the 1949 armistice line or Green Line, on the territory governed by the Israeli military since 1967. If this happens, there will be an internationally recognized border separating the sovereign territory of Israel from the sovereign territory of a neighboring state to be known as Palestine. Israel on this side, Palestine over there.

This would be a bad thing, Israelis warn, because the Palestinians do not want a state limited to the 1949 armistice lines. What they really want is the entire geographic expanse known as Palestine or the Land of Israel, including not just the presumed Palestinian part but the Israeli part as well. They want Israel to be erased from the map. Gaining sovereignty over the disputed territory gives them nothing but a base for future attacks on Israel.

That’s why the Palestinians are asking the international community formally to designate the precise line where their state ends and Israel begins. Because they want to erase that line, you see, and they figure the best way to erase it is to have it sanctified beforehand by the nations of the world in solemn assembly. Or something.

Are you following so far? I know it’s complicated, but try and stay with us.

Now, in a certain sense this is no big deal. The U.N. General Assembly has no legal decision-making or enforcement powers. It can’t impose sanctions or raise armies, unlike the Security Council, where the United States has a veto. The General Assembly simply can’t vote to create a state where none exists. Well, okay — it voted to create Israel. But mostly it can’t.

As a matter of fact, that raises another thorny question. The General Assembly did indeed vote in Resolution 181 of November 1947 to partition the Land of Israel and create two states, one Jewish and one Arab. Technically, though, it didn’t specifically say it was creating “Israel” — only an unnamed “Jewish state.” Therefore, when the Palestine Liberation Organization voted in 1988 to ratify Resolution 181, it was recognizing the Jewish state, but it wasn’t recognizing Israel as a Jewish state. I’m sure you can see the problem.

Regardless of the history, Israel’s leaders point to genuine security concerns that urgently require answers before Israel can comfortably contemplate an independent Palestinian state next door. Without ironclad security guarantees laid down in advance, a Palestinian state along Israel’s vulnerable eastern border, overlooking its narrow, populous coastal strip, is likely to pose a constant threat of terrorism, if not a staging area for a ground invasion.

For this reason, Israel has always insisted that if a Palestinian state does emerge in the West Bank and Gaza, it must be the result of a negotiated agreement with Israel. The Palestinians must agree that their state be demilitarized. The hills overlooking Ben Gurion Airport mustn’t become rocket-launching sites. Israel must have guarantees that arms aren’t smuggled across the Jordan River. The Palestinian state can’t be allowed to enter threatening alliances with the likes of Iran.

The crazy thing is, Israel and the Palestinians reached agreement on many of these points in negotiations between Prime Minister Ehud Olmert and Palestinian leader Mahmoud Abbas in 2008. Demilitarization, check. Keep Ben Gurion Airport clear, check. Close supervision of the Jordan River crossings, check. In return, the Palestinians were to get what they have insisted is their bottom-line minimum: a state based on the 1967 lines, with agreed land swaps. There were compromises in the works on Jerusalem and refugees, too. The deal wasn’t completed, but they were getting there.

So what happened? The talks were suspended when Olmert was indicted on corruption charges and Israel was forced into early elections. No, Abbas didn’t “walk away,” as myth has it. He stood back and waited until Israel elected a new leader with the legitimate authority to negotiate.

As it happened, the leader Israel elected, Benjamin Netanyahu, had different ideas. He decided Olmert had given away too much. Rather than pick up the negotiations where Olmert and Abbas had left off, Netanyahu insisted on starting again from scratch, or “without preconditions” as he put it. The result: no negotiations, despite frantic efforts by President Obama and others to finagle the two sides back into the room, with desperate measures like the partial settlement construction freeze that was more than Netanyahu could afford but less than Abbas needed and that lasted only until Abbas decided it would have to do.

And thus it happens that, with Olmert’s deal off the table, the Palestinians are trying a different route to the same goal, via the General Assembly. This way, in fact, they don’t even have to offer security guarantees they were offering to Olmert.

One might argue that it’s a pity the Netanyahu government doesn’t simply sit down with the Palestinian Authority and resume negotiations where they left off in 2008, as the Palestinian ambassador to the U.N. suggested in an interview with the Associated Press just before Passover. The Palestinians would prefer to work through negotiations rather than go through the General Assembly, the ambassador said.

If it did return to the table under those terms, Israel could have all the security guarantees it won during the last round and probably beef them up a bit. Whatever agreement the two sides came up with would have the endorsement of the Arab League, under the still-valid 2002 Saudi plan, and result in 22 Arab embassies in Israel.

That’s why a group of four dozen of Israel’s most senior security figures, including ex-chiefs of staff and former heads of the Shin Bet and Mossad, publicly called on Netanyahu in early April to offer to negotiate Palestinian statehood within modified 1967 borders. The Palestinians are ready. Israel’s security establishment thinks it’s a good idea.

On the other hand, the Netanyahu government has other factors to consider, and who are we to argue? Consider the turmoil that is currently sweeping the Arab world. How could an Abbas-led Palestine expect to be immune from the popular unrest that is toppling regimes in region? What happens if Israel signs the deal and recognizes Palestine as a sovereign neighbor, only to see its government swept from power? Would a successor regime honor the understandings and agreements of its predecessor, the way Hosni Mubarak kept the peace with Israel signed by Anwar Sadat? Or would a newcomer repudiate his predecessor’s understandings, in the manner of — well, Netanyahu?