In the Eye of Jerusalem’s Archaeological Storm 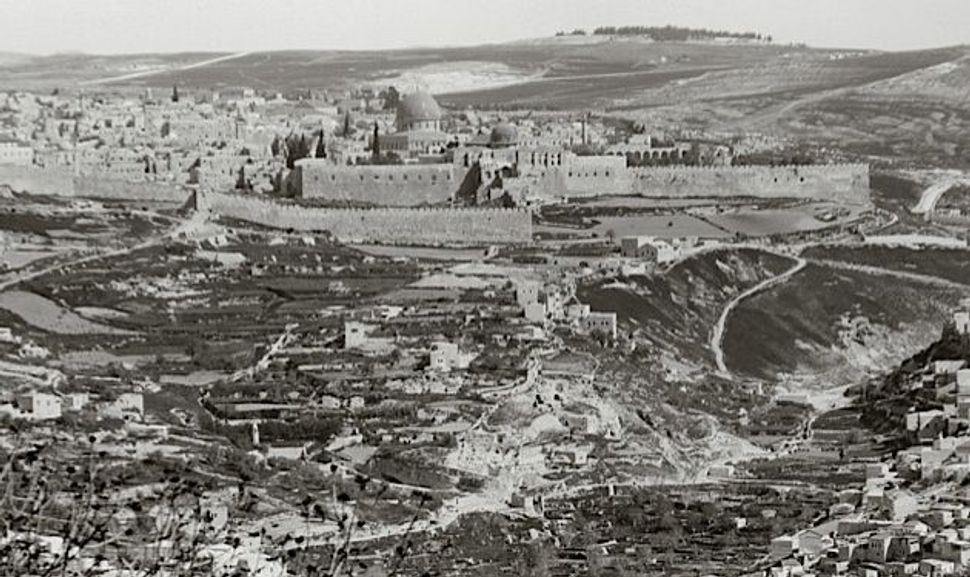 Once Empty: The City of David, located on a ridge extending south from the Temple Mount, was once mostly empty of buildings. Here the archaeological site is seen in the foreground in front of the Temple Mount sometime during the first half of the 20th century. Across the Kidron Valley, at right, is the Arab village of Silwan, which has since expanded into the City of David site. Image by library of congress

Archaeological activity in Jerusalem has been sucked into a whirlwind of conflicting political agendas, and the site commonly referred to as “the City of David” is in the eye of the storm. At issue is a place of seminal importance for the Jewish people and indeed for anyone who cherishes the heritage of Western civilization.

When dealing with archaeology in Jerusalem, one must first know the facts. Otherwise it is easy to be led astray by unfounded historical interpretations or to succumb to misinformation from those pursuing their own political agendas.

The City of David is a long and narrow six-hectare ridge that stretches to the south of the Temple Mount, outside the Old City of Jerusalem. It is the subject of an explosive mix of territorial disputes, political propaganda and conspiracy theories. But it is first and foremost a remarkable archaeological site that has been intensively explored by British, French, German and Israeli archaeologists starting as far back as the mid-19th century.

Confusion regarding this area begins with its name. Palestinians call it Silwan, but this is base propaganda aimed at the uninformed and uncritical international media. The Palestinian village of Silwan is located not in the City of David but rather to the east, on the other side of the deep Kidron Valley. Old photographs taken before the middle of the 20th century show the ridge cropping out south of the Temple Mount to be devoid of almost any buildings.

Jews and researchers of all backgrounds call the site the City of David — a name given to the ridge by early European explorers. Scholars agree that together with the Temple Mount and the southwestern part of the Old City, this ridge is the location of biblical Jerusalem.

Contrary to Palestinian claims, there is a scholarly consensus that the Temple Mount was indeed the location of the two Temples. Orthodox Jewish and Muslim sensitivities, however, have prevented modern archaeological work on the Temple Mount, which for the past 1,300 years has been the site of two Islamic holy places, the Al-Aqsa Mosque and the Dome of the Rock. Archaeological attention has therefore been diverted to the ridge to its south, where remains dating from the Bronze and Iron Ages were detected as early as the mid-19th century.

From the outset of modern exploration, the City of David produced exciting discoveries. Truly thrilling finds include the Siloam Inscription, a late-8th-century BCE Hebrew inscription that commemorates the hewing of a water tunnel under the ridge. Other important recent discoveries are the Pool of Siloam, dating from the Roman period, and the monumental street that connected it with the Temple Mount — places that were frequented by thousands during the three pilgrimage festivals each year.

But is the ridge south of the Temple Mount the location of the actual city of King David? This is one of the most excavated spots on the face of the earth, but so far fieldwork has not yielded any monuments from the 10th century BCE, the time of King David.

Recent claims by an archaeologist working at the site regarding the supposed discovery of the palace of King David and the city-wall built by King Solomon are based on literal, simplistic readings of the biblical text and are not supported by archaeological facts. The supposed “palace” features walls from different periods, none dating — as far as I can judge — from the 10th century BCE. And the “wall” of Solomon cannot be considered a true fortification and cannot be dated as early as the 10th century BCE. In light of this context, some scholars think that the remains of the Jerusalem of King David’s time are located under the surface of today’s Temple Mount.

This, however, does not diminish the tremendous importance of the City of David ridge. Scholars agree that starting in the late 8th century BCE, it was part of the enlarged city of Jerusalem. Illustrious biblical figures, such as Kings Hezekiah and Josiah and the prophets Isaiah and Jeremiah, probably strolled here at that time. Monuments unearthed here include impressive fortifications from the Bronze Age, the Kingdom of Judah and the period of the Hasmoneans, as well as water installations associated with the nearby Gihon Spring, ancient Jerusalem’s main water source. The Pool of Siloam is associated with the New Testament story of Jesus’ healing of a man who was blind from birth.

This site should be revered as one of humanity’s great landmarks. Were it not for the political controversy surrounding the site, it would doubtless be high on the list of world heritage sites.

Allegations are sometimes heard in the media that work in the City of David is unlawful and not executed to the standards of modern archaeology. This is untrue. Fieldwork there is carried out according to law and — taking into account the difficulties of excavating in a built-up area — using sound field methods. All excavation projects are directed by seasoned archaeologists and inspected by the Israel Antiquities Authority.

Palestinian accusations — sometimes uncritically accepted by international media — that tunnels are being dug under the Al-Aqsa Mosque in order to undermine its foundations, are false. The closest excavation to the mosque is some 70 meters to its south; this excavation stopped when it reached bedrock.

Still, there are legitimate criticisms to be made of the management of the site and the educational efforts conducted there. The City of David’s archaeological park is administered and its monuments presented to the public by a nongovernmental organization with a decidedly right-wing political orientation. While this is a result of complications over land ownership at the site, a way must be found to allow state organizations, such as the Israel Antiquities Authority and the Israel National Parks Authority, to oversee the management of this sensitive place.

The question of how to preserve Jerusalem’s extraordinary heritage is culturally and politically sensitive. Antiquities authorities under British Mandate, Jordanian and Israeli rule all failed to prevent construction of houses in the City of David. Further to the east, the village of Silwan is built over unique, monumental Judahite rock-cut tombs from the 8th and 7th centuries BCE. Two of these tombs had ancient Hebrew inscriptions on their façades. But the tombs are neglected, flooded with sewage and filled with village garbage. And, of course, the greatest devastation to have recently been inflicted on Jerusalem’s archaeological heritage was the large-scale bulldozing a few years ago of buried antiquities on the Temple Mount by the Waqf, which administers the Islamic holy sites, in preparation for the construction of a massive underground mosque.

The City of David’s monuments and antiquities — some yet to be discovered — are too important to be allowed to fall victim to politics or neglect. Whatever our political views, we need to be vigilant in maintaining this place as a tangible link to a rich past and as a site of honest historical inquiry.

Israel Finkelstein is a professor of archaeology at Tel Aviv University. He is the co-author, with Neil Asher Silberman, of “David and Solomon: In Search of the Bible’s Sacred Kings and the Roots of the Western Tradition” (Free Press, 2006).

In the Eye of Jerusalem’s Archaeological Storm