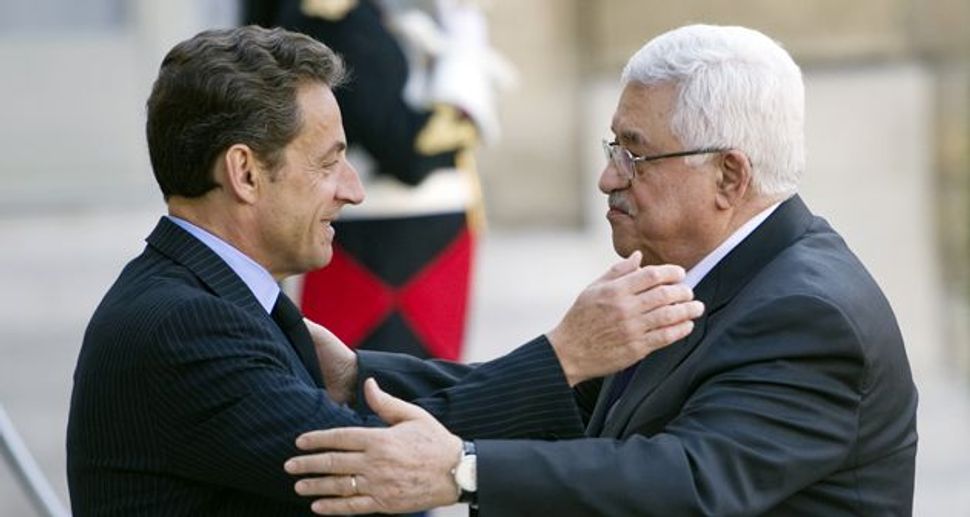 With the Palestinian Authority intent on declaring unilateral statehood in September, voices in Israel and in the United States have started to argue with increasing vociferousness against this idea. But for the clearest articulation of why Palestinian unilateral action is a wrongheaded approach one has to look no further than to the Palestinians themselves.

Among the wealth of information contained in the so-called Palestine Papers ­­— the nearly 1,700 confidential P.A. documents released by Al-Jazeera in January — are memos penned by the Palestinian negotiating team arguing that announcing a de facto state without first achieving an agreement would be a mistake.

In these many memos, the negotiators’ biggest concern is that any Palestine that the P.A. could give birth to alone — even with international recognition — would not fulfill the aspirations of the Palestinian people and might even undermine them.

For one thing, the P.A. could claim practical control only over sections of the West Bank that it already commands under the Oslo Accords, those known as Area A, and perhaps part of Area B, where there is joint Israeli-Palestinian oversight. Area C, which is about 62% controlled by Israel, would still be out of its grasp.

As the Palestinian strategists argue in these memos, a state declared outside negotiations with Israel would encompass then only about 40% of the West Bank (what happens to Gaza post-reconciliation is another question), creating what they call a “state with provisional borders.”

In a March 2009 memo to the Palestinian leadership, the negotiating unit worried that if the International Criminal Court recognizes this truncated version of Palestine as a state before “the termination of the Israeli occupation,” it would not only “prejudice border negotiations from both legal/political and physical points of view,” but could also “weaken Palestine’s claim to the remaining part of the occupied Palestinian territory.”

Indeed, the memo’s authors continue, the Palestinians’ claim “to the remaining parts of the occupied Palestinian territory could be weakened if the international community were to recognize the provisional border. Furthermore, a provisional border would weaken the status of the 1967 border.”

Moreover, the authors fear that once these provisional borders are recognized, the international community could lose interest in the issue, move on to other pressing world matters and forget about the other key issues of the conflict, such as refugees, Jerusalem, settlements and final borders. “The international community may come to regard the Palestine problem as a mere border dispute, rather than as a case of military occupation, thereby diminishing political pressure for prompt resolution of remaining issues,” the March 2009 memo argues.

The “take away” advice to Palestinian leadership was, as one August 2008 strategy paper put it: “It would be wrong to assume that nominal statehood, in and of itself, is the only goal for Palestinians. In reality, statehood is pointless without sovereignty and viability, the fulfillment of the rights that these entail, and the satisfaction of Palestinian refugee rights.”

To be sure, Israeli policymakers have another long list of arguments that underscore the inadvisability of unilateral action, not the least of which is the point alluded to in another Palestinian memo, from June 2000: Such a move would violate the 1995 Interim Agreement with Israel which states that “neither side shall initiate or take any step that will change the status of the West Bank and the Gaza Strip pending the outcome of the Permanent Status negotiations.”

So why are Palestinian President Mahmoud Abbas and Prime Minister Salam Fayyad pursuing a strategy that could undercut the Palestinians’ own declared priorities and aspirations? Why seek to declare a state outside the context of negotiations with Israel when that state would (even in the most optimistic Palestinian scenario) lack the sovereignty, viability, physical infrastructure and real benefits of statehood?

We may need to wait for another disgruntled Palestinian strategist to leak internal memos from 2010 and 2011 for us to understand the rationale.

However, as these leaked memos make clear, given all the risks and drawbacks of a unilateral declaration, the only effective path to a viable and recognized Palestinian statehood and resolution of the Israeli-Palestinian conflict continues to be through direct and bilateral negotiation.

There is understandable frustration and discouragement at the pace, violations and regular breakdowns of the negotiation process. The P.A. has also refused to sit down with Israel, and the recent Fatah-Hamas reconciliation further complicates the prospect for peace talks. Ultimately, however, Israel, the Palestinians and the international community must persevere and recognize that negotiation offers the best means for arriving at a two-state solution, with the Jewish state of Israel and an independent Palestinian state living side by side in peace and security.

Abraham H. Foxman is national director of the Anti-Defamation League.