The Twin Traumas of Gaza and Sderot 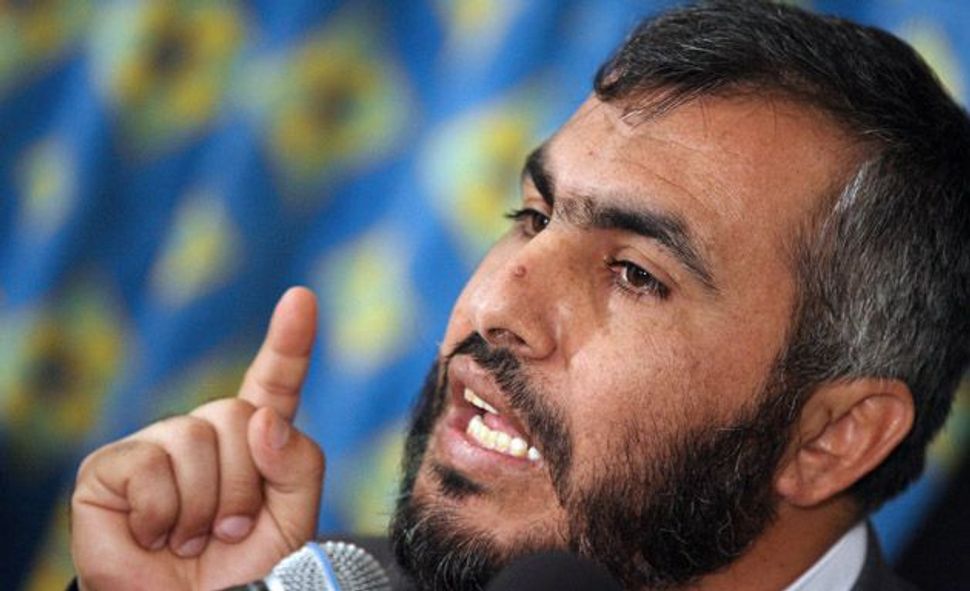 Meeting Hamas: Leonard Fein visited Gaza recently, where he met with Hamas officials, including Ghazi Hamad, to discuss the possibility of peace. Image by Getty Images

“You cannot begin to imagine the fear that infects everyone here. Even before Cast Lead, we felt it. But then, when the bombing began, it was devastating. And no one can know whether at any moment it will resume.”

Those are the words of Dr. Eyad Sarraj, the senior psychiatrist in Gaza, a man widely respected for his development of mental health centers and for training the personnel to staff them. We are sitting in his lush garden, in an area as utterly remote from the stereotypical depiction of Gaza — crowded, desperate, noisy — as can be; a place more akin to Savannah or Scottsdale; a place of beauty, affluence, good food and good talk.

I observe that his words are almost exactly the same as the words I’d heard the previous day, during a visit to Sderot. This was the southern Israeli city that was hit by rockets fired from Gaza as many as 50 times a day in the years before Operation Cast Lead, Israel’s three-week-long military operation in Gaza in 2008–09. Travel around Sderot, and the consequences are apparent: shelters everywhere you turn, nursery schools without windows and playgrounds with shelters than can be reached by scampering children within 15 seconds — the time between the alarm and the explosion.

And the psychological aftermath, I am told, persists. How can it not? The occasional rocket still lands, reminding both children and adults of their ongoing vulnerability, of the menace from Gaza, just a mile away.

So it is: two traumatized populations, neighbors in an area where good fences provide no relief. Yet when I tell Nomika Zion, an organizer of “Kol Acher,” an effort to bring Sderot and Gaza residents together, of the coincidence between her words and those of Sarraj, she replies: “With all the difficulties and despair that we have experienced in Sderot, the reality in Gaza, as we all know, is 10 times worse, and we have a heavy responsibility for that. I never forget that.”

We talk at length about the reconciliation between Fatah and Hamas, about the pitfalls that await and the historic opportunity it provides. Then we are unexpectedly joined by a very senior official of Hamas, Ghazi Hamad, who is very affable and insists that he and his movement are flexible.

I have, over the years, spent enough time with “important people” to know that they invent, they lie, they spin. That’s the norm for a brief interaction. But we spend more than an hour with Hamad, and there are lengthy exchanges that seem candid, credible. He says that Hamas is willing to recognize Israel and renounce violence, but that it can do so only in exchange for meaningful commitments by the other side. Hamas has very few cards to play; recognition of Israel may be its only ace. Will Israel stop the settlements, end the occupation, lift the siege of Gaza?

We get to the “right of return.” He asks why Israel, during its War of Independence, drove so many Palestinians from their homes. I refuse to take his question as rhetorical, and reply that United Nations Resolution 181, the Partition Plan, was rejected by all the Arab states, that they then launched a war against the new Jewish state, and I remind him that his side lost that war and that when you lose a war, there are consequences. (In its War of Independence, Israel lost nearly 6,400 people, 1% of its population. That war remains, by far, the costliest in human life of all of Israel’s wars, accounting for more deaths than the Six Day War; the Yom Kippur War; the 1982, 1993 and 1996 wars in Lebanon; the various wars in Gaza, and the first and second intifadas combined.) He is, I think — but who can know for sure? — taken aback. There seem to be things to talk about with this man. Neither side in the bitter dispute perceives the other as “a partner for peace,” but that is a judgment that deserves to be tested by both sides.

Two days later, I spend six hours driving through the northern part of the West Bank, driving on some roads that are reserved for Jews, sailing through sundry checkpoints where cars with the Palestinians’ license plates await clearance, seeing Jewish settlements and some of the estimated 95 Jewish outposts (acknowledged as illegal by the Israeli government), the separation barrier (sometimes a fence, sometimes a wall) that too often separates Palestinians from their lands. A day earlier, I was in Budrus, a Palestinian town that successfully engaged in nonviolent resistance to the Israeli police and military and finally won its case for relocation of the separation barrier so that it would no longer be cut off from its cemetery, its water sources, its lands. The rationale for the barrier must be, the court held, security, a ruling that sometimes holds. Too much data to process. Little wonder that so many Israelis tune out.

The Twin Traumas of Gaza and Sderot