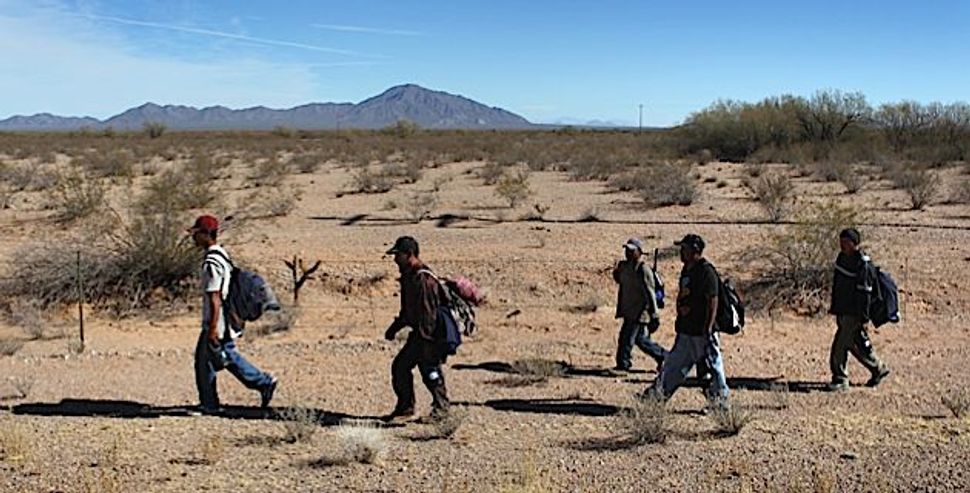 President Obama recently announced his recommitment to achieving comprehensive immigration reform, a term that has become shorthand for legislation to fix the country’s broken immigration system. We — as Americans and as Jews — have a special responsibility to help him achieve this goal.

We should praise the president’s message and this initiative, but we also should make sure that Obama and members of Congress follow through. As Jews, we should promote policies that fulfill the Torah’s mandate to “welcome the stranger because we were strangers in the land of Egypt.” We have a long history as a people of migration, and we know that generous and effective immigration policies have often made the difference between life and death, between grinding poverty and the opportunity for success.

Immigration not only built our country, but also saved the lives of millions of Jews who fled dangerous places such as czarist Russia and Europe through World War II. It has allowed our community to thrive. We know that addressing the issue of immigration with courage, wisdom and compassion can result in better integration of newcomers who can become fully American and contribute to this country’s diverse cultural mosaic.

What is not an option is maintaining an immigration system that fails to meet our economic, national security, foreign policy and humanitarian needs. The current de facto “illegal immigration system” has resulted in some 11 million undocumented immigrants living in the shadows without legal status, vulnerable to harassment and exploitation and fearful of being arrested at all times. The problems are legions: thousands of deaths along the American-Mexican border; family visa backlogs; punitive laws that needlessly separate families, and scarce or nonexistent legal channels for employers seeking to employ foreign workers. The status quo benefits only smugglers, document forgers and unethical employers. Ultimately, smarter use of enforcement resources, and a rational relationship between available visas and jobs, will make us more secure and encourage the hard work and entrepreneurial energy of new immigrants, which is crucial to restoring and sustaining our prosperity as Americans.

In today’s harsh, polarized political climate, it will be more challenging than ever to find the common ground needed to craft fair and effective immigration reform. But, remembering our responsibility to seek justice, the Jewish community can join together with allies to change the nature of the immigration debate, now simple sloganeering, to a bipartisan national consensus. We need to educate and organize within the Jewish community, advocate to government officials with whom our community has developed close ties over other issues and seek to make common cause with partner communities.

We have already started to strengthen our ties with the Latino community, the fastest-growing minority in the United States. As this strategic alliance of mutual support forms, immigration is a natural connector. At some point, however, dialogue alone will not be enough; true partnership will depend on concrete joint action.

When we at Hebrew Immigrant Aid Society, along with a broad array of other groups working on immigration issues, met recently with Obama, the president reiterated his deep disappointment that congressional action on reform had stalled and that the DREAM Act failed to pass the U.S. Senate, despite making it through the House with a bipartisan majority last December. The DREAM Act would have provided undocumented children brought to the United States more than five years ago with a six-year path to a green card if they graduated from high school and continued on to college or American military service.

Jewish, Latino and other advocates from around the country will be rallying, protesting and calling for legislation that speeds family reunification; creates pathways to citizenship for undocumented immigrants, particularly immigrant children, and empowers immigrants to fully integrate into American society. These actions demonstrate that immigration reform is a civil rights issue worth fighting for as Americans and as Jews, and is a reminder for all of us that the push for immigration reform is at its core about fairness and who we are as a people.

Ultimately, changing our immigration system is not just about how we treat people in this country; it is also about honoring our history and what immigration to the United States has meant for us. As Americans, we must ensure that we are an inclusive nation, not one defined by fear and isolation. And as Jews, we must remember that we are commanded to welcome the strangers — not because they are Jews, but because we are Jews.

Gideon Aronoff is the president and CEO of the Hebrew Immigrant Aid Society, the international migration agency of the American Jewish community.