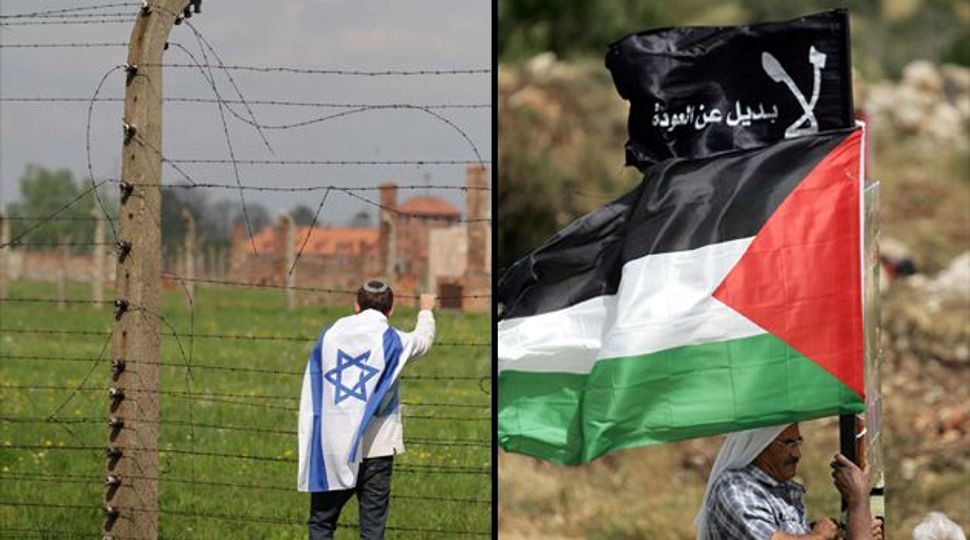 Many Jewish Israelis and their supporters have reacted with outrage to a New York Times Op-Ed on May 17 by Palestinian President Mahmoud Abbas, particularly its invocation of the Palestinian historical narrative. Most troubling to them was Abbas’s description of how his family was “forced” to flee their home in what became Israel in 1948 — a word choice they feel implies that Abbas and his family were evicted by Jewish troops.

Abbas did not make any such claim, of course. Palestinians did, as the historical record suggests, quite reasonably feel “forced” to flee a war zone even when they were not physically compelled to do so. But the focus on that one verb was also a distraction from the main point of his narrative: the ongoing denial of the right of Palestinian refugees to return to their homes. This denial, which is unquestionably true, lies at the heart of the Palestinian refugee grievance. It is also a historical fact — confirmed even by Israeli leaders who personally participated in these actions like the late Prime Minister Yitzhak Rabin — that many Palestinians were subjected to forced expulsions, even if Abbas’s family was not among them.

What this disingenuous uproar points to is the continued refusal by both Palestinians and Israelis to recognize each other’s narratives as legitimate and to insist that their version of history alone is truthful.

Both sides fundamentally regard each other as interlopers. Modern Jews, particularly Jewish Israelis, see themselves as the sole heirs of the biblical Hebrews, and tend to view that ancient history as a metaphysical deed to the entirety of the land. They also tend to see Palestinian history as beginning with the Muslim conquest of Palestine, and sometimes dismiss most Palestinians as recent arrivals drawn to the area by the benefits of Jewish immigration in the 20th century. Palestinians typically consider themselves to be the descendants of all of the ancient peoples of the land, including the biblical Hebrews, and often question the lineal descent of modern Jews from the biblical Hebrews. They sometimes cast Jewish Israelis simply as colonialists and question key aspects of the Jewish historical narrative.

Israeli leaders have a long history of denying not only Palestinian history, but also Palestinian identity, such as Golda Meir’s infamous comment that there was no such thing as a Palestinian people. Palestinians, of course, have consistently returned the favor, frequently implying that Jews are a religious community but not a coherent national or ethnic group with the right of self-determination.

The truth elided by both parties is that the Palestinian and Israeli identities are 20th-century phenomena that emerged in parallel and in contradiction to each other. One hundred years ago, the words “Israeli” and “Palestinian” were meaningless. This is not to say that Arabs and Jews don’t have deep histories, but both political identities are recent constructs, forged in the context of the ongoing conflict.

Palestinian and Israeli national narratives both contain elements of the truth but they are tendentious and dismiss crucial and undeniable, but inconvenient, historical facts that are crucial to the other party’s identity. It is impossible, in the foreseeable future, for these narratives to be reconciled. Jewish Israelis will not become Palestinian nationalists, and Palestinians will not become Zionists.

One of the reasons that the two-state solution is the only way out of the conflict is that it would allow the two national projects and narratives to coexist in separate states. Rather than trying to base a resolution on arriving at one mutually accepted understanding of history, a two-state solution would also be a tacit acceptance that there are two mutually exclusive narratives, but this should not prevent each side from achieving some compromised version of its national aspirations.

But Prime Minister Netanyahu’s demand that Palestinians recognize Israel as “the nation-state of the Jewish people” is implausible because it implies a permanent, metaphysical national right belonging to all Jews in the world, whether or not they are Israelis. However, language in which Palestinians recognize a Jewish right of self-determination in the State of Israel and Israelis recognize the Palestinian right of self-determination on what are now the occupied territories, is almost certainly a prerequisite for the conclusion of a viable peace agreement.

Such reciprocal recognition of self-determination in two states will probably have to come at the end of negotiations, rather than as a prerequisite for them. The core final status issues, like refugees and Jerusalem, cannot be bypassed or foreclosed first.

The ultimate goal of a two-state solution, however, must be not only two states for two peoples but also two states that will each embody an expression of their respective people’s national and historical narratives, two stories that will coexist without one needing to negate the other.

Hussein Ibish is a senior research fellow at the American Task Force on Palestine and blogs at Ibishblog.com.