The Poverty of Riches 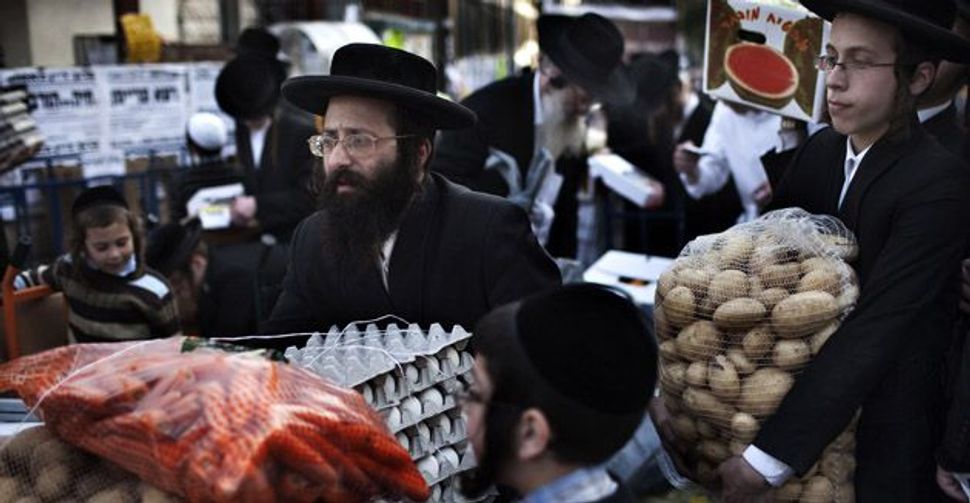 Righteous but Needy: Hasidic Jews at a food distribution center in Jerusalem in April collect food before Passover. Image by Getty Images

In April, we learned that the poorest municipality in the country by income is Kiryas Joel, the Satmar Hasidic hamlet in Orange County, New York. To anyone who knows the community, this was no surprise. The families living there are younger, larger and more likely to be led by a full-time student of Torah who is earning a pittance, if anything.

One might conclude that a life guided by ritual and rigorous reading of Torah leads to poverty.

And so, it’s hard to know what to make of the recent finding of a Pew Forum on Religion & Public Life, released in May, that of all of America’s religious denominations, Reform Jewry’s adherents are the biggest earners. Reform households top even those belonging to the mainline Protestant sects. Conservative Jews are not far behind.

It would appear, to the naked eye, that there is an inverse relationship between observing Torah and amassing wealth.

Clearly this can’t be the case. And yet there are many in the secular Jewish community who deeply resent the ultra-Orthodox precisely because of their grinding poverty. Secularists conclude that this is a poverty of choice: The ultra-Orthodox have more babies, they rarely work outside the yeshiva and they appear to be indifferent to the material needs of their families.

Such poverty is an affront to Jews raised on the stories of our bootstrapping grandparents and great-grandparents. We were brought up to honor and emulate those who labored intensively so that we might live comfortably — and by the by, we gave up much of the religious conventions of the Old World. We cannot deny that the dominant narrative of American Jewish life tilts away from Torah study and ritual and toward material success. Even if we do not institutionally say that, we believe it and value it, because that is, in fact, how most of us live.

The ultra-Orthodox are often guilty of the very same logic, but in reverse. They funnel their young men into the rabbinical kollels (talmudic institutes) and their young women into the OB/GYN wards, without regard to their potential talents to do other things and serve God in other ways. I will concede that there is little spiritual sustenance in material goods, but the Torah explicitly praises work and an industrious life beyond study. As if to prove the point, outside the ultra-Orthodox world a great many men and women are actively, rigorously and deeply Jewish while earning a good living doing something other than Torah study.

Truth is, those who would conclude that secularism is the path of progress share the same illness as those who believe that materialism stifles man’s relationship with God. They’re both wrong. The fact that the less observant Jewish denomination is the wealthiest suggests not a cause, but a coincidence.

The material poverty in our larger community is not reserved to the ultra-Orthodox alone. Many Jewish seniors, Russian émigrés and other nonreligious Jews need help.

“I know of plenty of secular poor Jews,” said William Rapfogel, executive director and CEO of the Metropolitan Council on Jewish Poverty, the premier local organization devoted to this issue. “We have plenty of people come to our office, and if they’re ultra-Orthodox or Russian, you might guess why they’re in the building. But we have lots of secular Jews, too, and nobody thinks they’re coming to us. But they keep coming. Business for us, unfortunately, is very good.”

Meanwhile, not all poverty is equal. The people of Kiryas Joel may lack the comforts of modern communications and electronic toys. They may lack cars of their own. But that is not poverty as they define it.

My suggestion to both conceits is to learn from the other. From the highly secularized, the ultra-Orthodox could stand to learn about the honor of hard work and vigorous striving. Not, perhaps, for material goods in their case, but for excellence and standards. This should apply in the kollel above all. If the ultra-Orthodox decided to educate as rabbis only those students who showed true mastery and promise, and sent the rest to pursue careers more suited to their skills, that would create a far more vibrant religious community, not to mention a more successful one. This guidance applies especially to women, who have much to give to their communities, in and out of the home.

From the ultra-Orthodox, the secular Jewish community could learn to live with less and to find fulfillment from the eternal as well as from the material. Wealth of one kind need not impoverish the soul. The life of Torah offers riches of its own and, as many once-secular Jews have found, moments of transcendent beauty that are, as the commercial says, priceless.

The Poverty of Riches