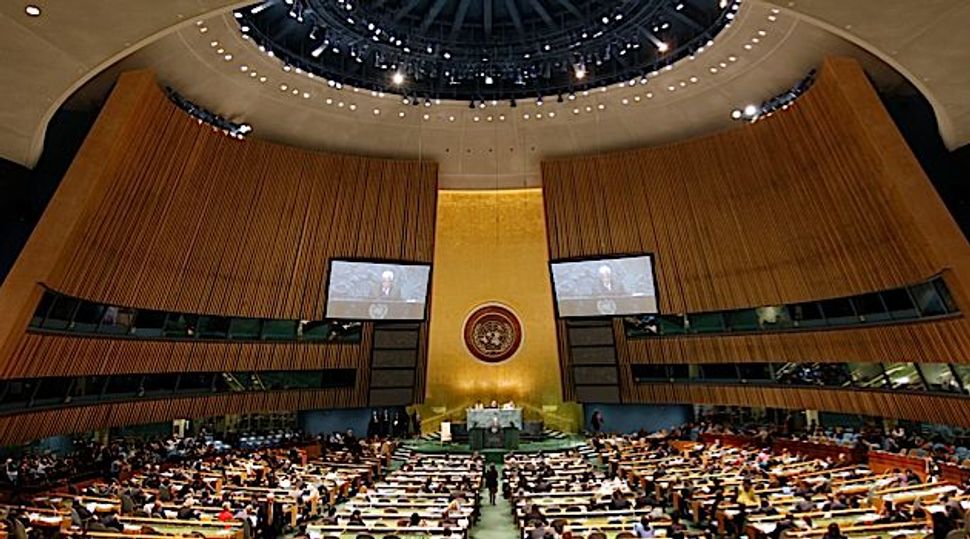 Destination Point: The effort to get world recognition of Palestine will play out in September at the United Nations General Assembly. Image by Getty Images

This fall, the Palestine Liberation Organization will ask the 192 member states of the United Nations to declare an independent state of Palestine. In my view, this is a bad idea; if I could, I would stop it. But since the peace process (apparently) is dead and it is unlikely that anything will occur to dissuade the Palestinians, we’d best understand what this actually means.

But immediate legal consequence is not what the PLO is going for. If it wins a lopsided victory in the G.A. — as is expected (how lopsided may depend on the results of President Obama’s recent visit to the capitals of Europe) — the “Independent State of Palestine” would have instant international legitimacy and perhaps, over time, rights and privileges far beyond what an “observer state” normally has. (The Holy See is the other current observer state.) But there are other consequences that could prove catastrophic. Salam Fayyad, prime minister of the Palestinian Authority, recently told me, after I visited his Ramallah office with a group in April: “A week or two or three after such a vote, Palestinians would say to each other, ‘So where is my state?’ Nothing would have actually changed on the ground, and their anger and frustration would boil over. They would blame us, and they would be right.” He added, “I don’t need the recognition of the world, I need recognition from Israel.”

In the wake of such a vote, many countries, one by one, would surely take the legally consequential step of “recognizing” Palestine as a full-fledged state and open bilateral state-to-state relations — a separate matter from member state status in the U.N. And what will these countries do about an Israel that continues to occupy the (according to them) full-fledged independent state of Palestine? This is not rocket science. They would sanction, punish and further isolate Israel, perhaps in ways that we cannot even imagine today.

These are good reasons, then, that one would hope to avoid such a U.N. resolution. But if it is presented, which now seems all but inevitable, what then?

I know plenty of Israelis, and also American lovers of Israel — I count myself among them — who deeply believe that the creation of an independent state of Palestine is the only way to ensure a secure democratic Jewish Israel. So when the question of Palestinian independence is laid before the world in the form of a U.N. resolution, what do we do? How do we see this moment? Is this a vote of monumental historic significance? Is this a pivot of history? Will it be like the U.N. vote on Israel in 1947, seared into the world’s memory? Or will it be just another irrelevant and forgotten misadventure of the United Nations?

I would bet that it will be the former. And if I am right, then on which side of history will American Jews and American Jewish organizations stand? Where will our hearts be? What should we urge the United States to do? Vote yes? Vote no? Which vote would you be ashamed of? Which vote would you regret forever? Can you advocate abstention without being a complete coward?

In the play “A Man for All Seasons,” Sir Thomas More commits a supreme act of moral courage by refusing to sign the king’s loyalty oath, which would, in effect, mean renouncing the supremacy of the pope. Before finally concluding that he cannot sign, thus signing his own death warrant, he asks his daughter about the oath. “But what is the wording?” he asks. His daughter says: “Do the words matter? We know what it means.” “Tell me the words,” More says. “An oath is made of words. It may be possible to take it.” I think of this in my struggle with the U.N. resolution. The resolution will be made of words. What will they be? If it strictly defines Palestine’s borders as being the 1967 Green Line and does not make room for agreed upon land swaps, then I would oppose it.

But what if the resolution is cast in language that tracks Obama’s recent speech? What if it defines Israel as a Jewish state and acknowledges Israel’s right to secure borders? What if its provisions for Jerusalem are acceptable? What if? What if?

Will we direct our efforts only to stopping this Palestinian initiative but make no investment in trying to shape it? Will we give up in advance on the possibility that we can be a partner in drafting a good resolution, one that actually reflects our vision of peace?

This resolution is going to happen. Think of Thomas More: What is the wording?

Kathleen Peratis, a partner in the New York law firm Outten & Golden LLP, is co-chair of the Middle East North Africa Committee of Human Rights Watch and an executive committee member of J Street. Her opinions here are her own and not those of these organizations.