Why I Decided To Study Non-Belief? 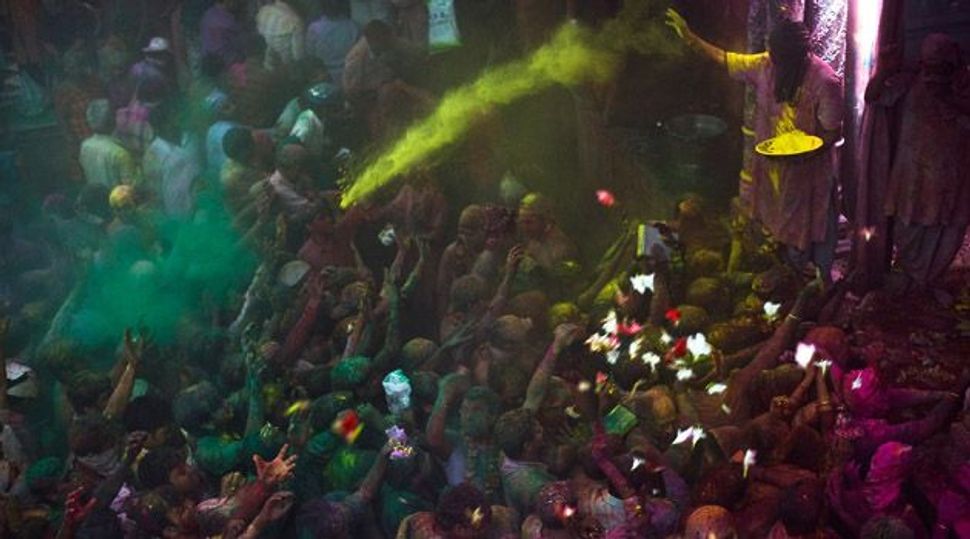 Beyond Belief: A Hindu priest throws color onto Hindu devotees during Holi celebrations at the Bankey Bihari Temple on February 28, 2010 in Vrindavan, India. Image by Getty Images

The Forward interviewed Phil Zuckerman, a professor at Pitzer College in Claremont, Calif. a who will soon launch the first academic department of secular studies.

Forward: What got you thinking about starting a department of secular studies? What kind of need are you filling?

Phil Zuckerman: I had been studying religion for many years. I was always fascinated by religious beliefs specifically, and perplexed by how people could strongly believe what to me seemed manifestly implausible. But after many years of studying religion, I started to get fatigued a bit. Then, back in 2005, I was asked to write a chapter for an edited book on atheism, focusing on just how many atheists there are in the world and whether or not rates of atheism are rising or declining and where. It sparked a desire to further study people who live life without religious faith. I soon began a new research project, looking at contemporary Danes and Swedes, arguably the least religious people on earth and yet they have constructed extremely moral and humane societies. I then taught a class, in 2009, which looked at secularity specifically. The student response was extremely positive. The idea to form a secular studies program just snowballed from there. It became clear to me that scholars have been studying religion for over a century — looking into every cranny — while secular life has simply been ignored. And some of us feel that it is time to study non-religious life with that same vigor.

Forward: You described yourself as “culturally Jewish, but agnostic-atheist on questions of deep mystery.” How did you arrive at this self-definition? Did you have to struggle at all with your own Jewish background?

I am a third-generation non-believing Jew. My father’s parents were socialist-Bundist atheist Jews from Warsaw. My mother’s parents were assimilated Jews from Bohemia who were more interested in skiing and hiking than anything remotely theological. My dad is a convinced atheist, and my mom just doesn’t worry too much about such issues. So I was raised in a family — and indeed, a neighborhood — where religious faith was virtually non-existent. That said, I have always strongly identified as a Jew. I went to Yiddish school, Hebrew school, Jewish camps, lived in Israel for a year, etc. And yet – like many (most?) other Jews, I have never believed in the actual supernatural teachings of Judaism. Most Jews “get” this orientation. But many non-Jews are confused. Why do I call myself Jewish if I don’t believe in the religion? Why do I occasionally light Shabbos candles if I don’t believe in God? It takes quite a bit of explaining: I like and enjoy certain cultural aspects of my Jewish heritage, while rejecting the specifically religious aspects thereof. And yes, I realize at times it can seem contradictory. Maybe it is. Such is life.

Forward: How can you be sure that the department won’t become anti-religious as opposed to studying the forms of non-belief?

First off, let me say that while I think there is a lot of good contained in religion, there is also a lot of bad. Religion is a human creation – so it thereby entails all that is of humanity. And the bad parts deserve to be criticized. The instances and ways in which religion serves to support oppression, hinder human progress, thwart scientific innovation, deny women their rights, support homophobia, kindle ethnic hatred, justify inequality — all such aspects of religion should be criticized. That said, however, critiquing religion is not the goal of secular studies. Rather, our purpose is to establish an interdisciplinary program focusing on manifestations of the secular in societies and cultures, past and present. We wish to study non-religious people, groups, thought and cultural expressions. If anything, we hope that secular studies become complementary to religious studies — not antagonistic. And indeed, were the secular studies program to become simply or solely a bastion of anti-religion such an enterprise would quickly become tiresome for all involved.

Forward: Do you have a sense of why Jews are such a largely secular people?

I have been struggling with this question for years! By many estimates, and depending on how one defines such things, Jews are arguably extremely secular. Yes, many Jews practice certain rituals and are members of synagogues — and yet when it comes to actual supernatural beliefs, Jews exhibit very low levels. This is the case in Israel as well. How do we explain why Jews are such non-believers? Historically, the Haskalah in Eastern Europe was key. But what caused that? Why did Jews take to Enlightenment philosophy and humanist values so rapidly and in such numbers? Perhaps it has to do with our long history of intellectualism and debate. Grappling with belief has always been central to Jewish culture. Perhaps the Holocaust broke some people’s faith in a benevolent (or even extant) God. Perhaps it has to do with the fact that we have 2,000 years of experience critiquing and rejecting other people’s religious beliefs (Christianity and its faith in Jesus), which eventually made it easier for us to critique and reject our own supernatural beliefs. The possibilities are endless. It is a riddle I most definitely would like to at least try to solve one day.

Forward: Has the attention to your field of study changed your mind about the perception of non-believers in America? Is it still impossible to imagine an atheist running for president?

There is no doubt that, at least within the United States, there is deep and widespread suspicion and dislike of atheists. Americans equate faith in God with morality (which is an erroneous correlation, I must stress). Many Americans equate atheism with wickedness or Soviet-style communism. One of the most common questions nonbelievers get from believers is: “If you don’t believe in God, how can you be a good person?” However, despite this anti-atheism that permeates much of American society, there may be signs of change. As more and more people “come out” about their lack of faith, other people may realize that atheists aren’t the beasts they had previously believed them to be. As for it being possible for an atheist to become president? Not a chance. At least not now. However, a non-religious person could be elected governor of Minnesota (remember Jesse Ventura, who publicly condemned religion as “a sham and a crutch for weak-minded people.”). And Australia currently has an atheist prime minister – so who knows?

Why I Decided To Study Non-Belief?