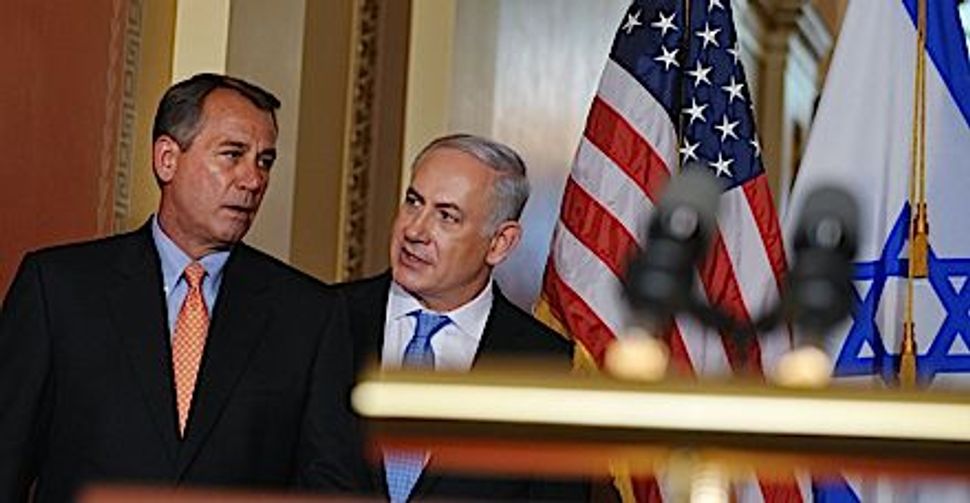 When a group of student radicals took over the Columbia University administration building in 1968, they issued a series of demands having to do with university policies. The administration wisely ignored these demands, however, because it understood that, in actuality, they were not terribly relevant to the problem it had on its hands. As radical student leader Mark Rudd had explained even then, these were mere excuses for the group’s violent power grab. The Columbia rebellion was about “racism and imperialism,” not “dorm rules or democratizing university governance or any of that bullshit,” Rudd explained. “The issue is not the issue.”

Rudd’s admission is useful to recall whenever a debate is sparked among American Jews about the wisdom of pursuing peace with the Palestinians. The “issue,” whatever it may appear to be at the moment, is never really the issue. The underlying question beneath all of these arguments can, as it happens, be stated quite simply: “Do you think Israel should be encouraged to make concessions for peace or not?” While most American Jews do support such concessions, they remain extremely nervous about opposing the Israeli government, even when encouraged to do so by Israelis themselves. This gives the leaders of professional Jewish organizations — whose politics are much closer to Republican conservatives than are those of the community they profess to represent — a relatively free ride when it comes to attacking liberals and cozying up to the right wing.

And so when Israel has a hawkish government — one that has views inconsistent with the vast majority of those of American Jews — it nevertheless appears to enjoy a degree of support from the community that is actually, in many respects, a mirage, but one that many journalists and politicos mistake for the real thing.

This dynamic was on display when Prime Minister Benjamin Netanyahu came to Washington to address a joint session of Congress. The trip had nothing to do with advancing either of its ostensible goals: moving forward the peace process and strengthening Israeli security. Rather it was a straightforward deal between right-wingers in both countries to advance their own short-term political goals at the expense of the interests of both nations.

The Republican leadership issued the invitation to Netanyahu because the two share a political project. Although more than three-quarters of American Jews voted for Obama, and roughly the same percentage will likely support his re-election, Republicans see an opportunity to seize on the distance between a recalcitrant, right-wing Israeli regime and a liberal Democratic American president for their own political gain. What’s more, the party’s base is increasingly dominated by the conservative Christian Zionists, whose love for Israel is, according to their interpretation of Scripture, commanded by the Almighty.

Netanyahu played along with the Republican script as if he were looking to score a contract with Fox News. Obama proposed a resumption of peace negotiations based on “1967 lines with mutually agreed upon land swaps.” Netanyahu exploded in faux hysterics, pretending that Obama had not mentioned the swaps. After all, they are what matter. Rhetoric aside, Obama’s formulation is no different from the position of pretty much every president before him; it is really not even any different from the Israeli position.

Joining Netanyahu in pretending that Obama had said what he clearly had not said were leading Republican presidential candidates Tim Pawlenty and Mitt Romney; the latter accused the president of throwing Israel “under the bus.” Right-wing Jewish organizations went a bit further. The Zionist Organization of America accused the president of “promoting and supporting the establishment of a Hamas/Fatah/Iran terrorist state on the Auschwitz 1967 indefensible armistice lines.” Even the Simon Wiesenthal Center referred to 1967 “Auschwitz” borders. Both statements are morally and intellectually repugnant: Millions of European Jews did not die at the hands of Hitler’s henchmen for the honor of becoming political footballs.

All this sound and fury also signifies nothing whatsoever about Israel’s actual borders, defensible or not. First off, nobody is even considering forcing Israel to accept any agreement. Second, despite the considered opinion of the right-wingers in the professional Jewish organizations and the wannabe Republican presidential candidates — not one of whom, as far as I can determine, has any experience in actually defending Israel’s borders in any respect, save the rhetorical — more than 90 of Israel’s most distinguished ex-military officers and former government officials, Mossad veterans and former veterans of the Israel Defense Forces signed a full-page advertisement published in The New York Times (and organized by J Street), calling on their government to “Act now to achieve a two-state solution on the basis of 1967 borders,” adding, “Any other policy contradicts the promises of Zionism and the welfare of the Jewish people.”

Unless one allows oneself to be distracted by the phony rhetoric, it becomes difficult to justify Netanyahu’s willingness to inspire yet another breach with Israel’s only real friend in the world, particularly during this potentially pregnant diplomatic moment. Were Bibi genuinely interested in advancing Israel’s security in Washington, he might have focused on working with the administration to head off the forthcoming unilateral Palestinian declaration of statehood, reinforced the president’s insistence that Hamas recognize Israel, renounce terrorism and embrace the Jewish character of the Zionist state, and focus on the potential threat of a still hazy but potentially destabilizing Iranian nuclear threat. All these options were available to him. Instead he chose to alienate the administration yet again by playing patsy for the Republican right-wingers and their stalking horses inside the professional American Jewish organizations.

Thing is, while the “issue” may not be the issue for Netanyahu and his new BFFs, it’s not going away. The Palestinians have understandably stopped believing in his government’s willingness to enter into good-faith negotiations and are pursuing a dual-track strategy of a unilateral declaration of statehood and “reconciliation” with Hamas. Israel’s security, as well as its perceived legitimacy, will be deeply harmed by both of these developments. And Israel’s enemies the world over will have Bibi and the Republicans to thank when it happens.

Eric Alterman is a CUNY Distinguished Professor of English and Journalism at Brooklyn College and also writes a column for The Nation.