When the GOP’s 7 Dwarfs Debate the Economy, Dopey Writes the Script 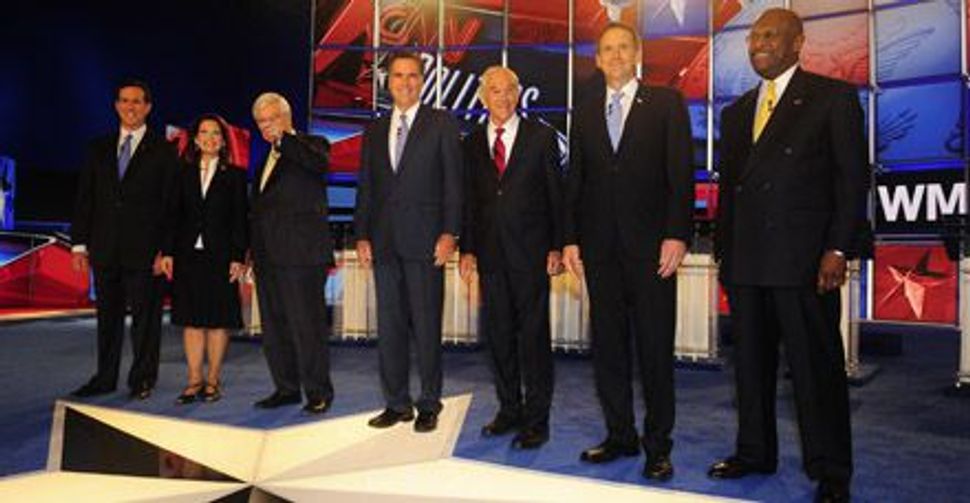 A few weeks before CNN’s big Republican presidential pillow-fight, an odd sort of foreshadowing materialized in Jerusalem when a local right-wing think tank, the Jerusalem Center for Market Studies, staged a daylong economics conference. The title was “Free Markets and Social Progress in Israel,” but the unspoken theme was more like “Republicans and Their Jewish Problem.”

The day’s big take-away, as described by conservative pundit Elliot Jager at JewishIdeasDaily.com, was that Jews really should support the low-tax, unregulated, free-wheeling capitalism favored by right-wing parties like, say, the GOP. Jager just can’t figure out why they don’t.

I’d like to think Jews vote the way they do because they come from a tradition that forbids that sort of naked competition. Because they’re heirs to a set of laws that require economic regulation (“Thou shalt not have diverse weights and measures,” Deuteronomy 25:13), a tax-supported government bureaucracy (“unto the children of Levi I have given all the tithe in Israel in return for their service,” Numbers 18:21) and compulsory redistribution of income (“thou shalt not reap the corners of thy field; thou shalt leave them for the poor,” Leviticus 19:9).

Unfortunately, I suspect that most Jews aren’t too concerned about the legalese details of what the Good Book doth require of them. If they were, there wouldn’t be so many Chinese restaurants.

So I’d like to propose my own theory as to why most Jews don’t vote Republican. Here it is: As a people taught to value education, Jews are good at math. Also reading and writing. Accordingly, they recognize a dopey idea when they hear one.

You can usually tell a dopey idea by reading it out loud to see if it makes any sense. Check whether the numbers add up. Look to see whether it’s been tried before and if it worked. And if you’re looking for really dopey ideas, you can’t do better than a Republican presidential debate. At this latest one, the seven candidates were happily united behind a list of whoppers that didn’t even come close to adding up and had already failed colossally, and they were flogging them like a dead horse.

The biggest and dopiest was the persistent notion that the way to create jobs and get America out of its lingering doldrums is to lower taxes on corporations and the rich and to do away with regulation of business. The idea seems to be that if you leave rich people with larger amounts of money and lay off the pollution and safety stuff they will invest their bounty in creating and expanding businesses, thus generating new workplaces, which will increase the general affluence and pull America out of its hole.

Here’s the tip-off that this makes no sense: Businesses right now are sitting on $2 trillion in liquid cash that they’re not investing and have no immediate plans to invest. They don’t see the demand out there to justify making new products. You read that right: two trillion dollars. That’s according to June figures from the Federal Reserve.

The funny thing is, there’s no demand because so many people don’t have jobs or are afraid they might lose them or recently took new jobs at lower pay. So the answer to creating new demand is to get more people working for decent wages. But the private sector has no intention of doing that. In fact, of the new investment that is happening, much of it is going into machinery, not workers. It’s cheaper. Basically, they’re not hiring because they don’t feel like it, and giving them more money won’t change that.

None of this should be surprising, though. It’s not as though reducing taxes and lifting regulations hasn’t been tried already. It’s exactly what we’ve been doing for the past 30 years, ever since Ronald Reagan became president. America today isn’t over-taxed. It has one of the lowest overall tax burdens — counting all taxes, from all levels of government, as a percentage of GDP — in the industrialized world. As of 2008, only Mexico and Chile had lower taxes, according to the authoritative Organization for Economic Cooperation and Development.

The result is our present economy. Lowering taxes hasn’t boosted output and created a bigger tax base. It’s simply reduced government’s revenue, leaving huge deficits to pile up every year except for a brief period during the Democratic Clinton presidency. Total national debt has ballooned steadily from $0.9 trillion owed in 1980 to $11 trillion in George W. Bush’s last budget year to the $14 trillion we owe today.

But haven’t lower taxes and less regulation created prosperity and good jobs? Dream on. Manufacturing has fled overseas, borne on the wings of new technologies (like container shipping and computerized inventory), its departure eased by friendly regulations and tax breaks, and replaced by lower-paying service jobs. Companies and their owners have thrived, but employees haven’t; middle-class wages have been stagnant for 30 years.

Washington could have intervened with an industrial policy of targeted loans, subsidies and tax incentives, the way Germany and Sweden do, to foster high-wage industries and preserve a middle class. But we Americans don’t like our government interfering with the magic of the market. We like our regulations loose, like our congressmen’s morals.

And so we deregulated the banks. And the magic began. Banks grew like Godzilla and started lending out cash like drunken frat boys handing out beer until everything came crashing down. Then Barack Obama got elected. Now, suddenly, it’s all his fault, and the seven dwarfs want the keys back so they can start all over again.

Maybe it’s time we started listening to the Good Book: “That which is crooked cannot be made straight, and that which is wanting cannot be numbered. And there is nothing new under the sun.”

When the GOP’s 7 Dwarfs Debate the Economy, Dopey Writes the Script