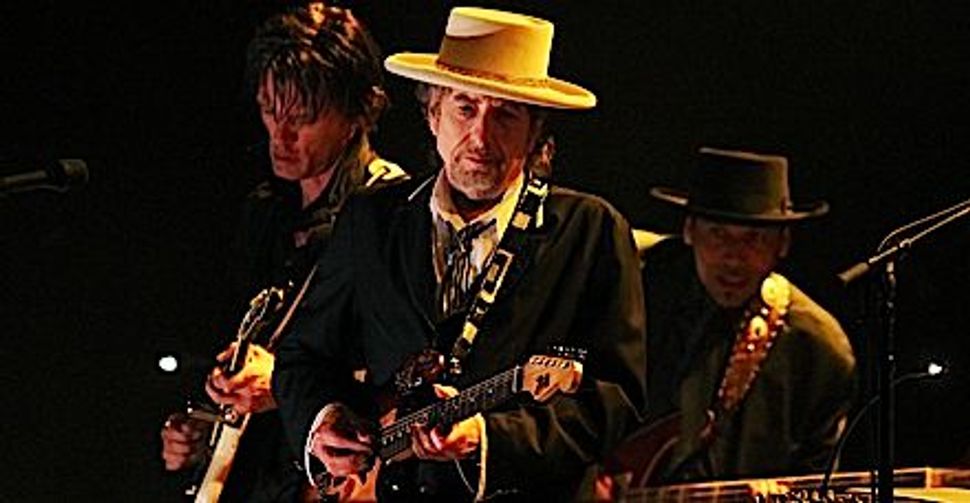 If you’re one of those people who tries to follow the news out of Israel, late June probably found you feeling anxious about the impending launch of the next Gaza protest flotilla. You’re worried about a repeat of the May 2010 fiasco, when the Israeli navy boarded a Turkish protest ship to enforce Israel’s Gaza blockade and ended up killing nine Turkish citizens. You’re saddened and angry about Israel’s growing isolation, and hoping its navy gets it right this time.

If you actually live in Israel, on the other hand, there’s a pretty good chance your thoughts were focused on Bob Dylan. You might be one of the 25,000 people who paid to hear him June 20 at Ramat Gan stadium outside Tel Aviv and left feeling confused, annoyed, cheated and perhaps wondering why, after the fiasco of his last appearance in 1993, he couldn’t get it right this time. And, yes, saddened and angry about Israel’s isolation. Fans expected Dylan, the maverick moral voice, spiritual seeker and sometime Chabadnik, to show some sign of love. What he gave was a flat, mechanical performance, 15 songs and then back to the airport without so much as a hello or goodbye, leaving Israelis as alone as before.

Mind you, there’s a part of Israel that revels in isolation, believing it is meant to be, in the Torah’s words, “a nation that dwelleth apart.” For most Israelis, though, it’s a source of mounting dismay. Most Israelis believe their country is unfairly blamed for a conflict that isn’t their fault. They pack their sons off in uniform, worry about rockets and bus bombs and then read that their leaders have been indicted for war crimes and international rock stars are canceling local appearances in protest. Sometimes it feels as though the very walls are closing in.

When celebrities do show up to perform, therefore, it’s more than just a night out. It’s an affirmation that Israel is still part of the world. Each star’s arrival at Ben-Gurion Airport is front-page news. It’s followed by an obligatory handshake with President Shimon Peres in Jerusalem and then a sold-out performance in a park or soccer stadium. Fans tend to stand throughout the concert, Tel Aviv fashionistas alongside gray-haired settlers with American accents, all swaying with the music, clapping rhythmically and singing along. The parking lots are buzzing before and afterward with earnest debates: How does this gig match up with Elton John’s appearance in 2010 or Paul McCartney’s in 2008? Did they offer the right mix of new material and old favorites? Did you like the staging?

In recent years Shimon Peres, something of an international rock star himself, has expanded the range of celebrity drop-ins by putting on an annual festival of Big Ideas that he calls the Israel Presidential Conference. Superstar artists, statesmen, entrepreneurs and academics come from around the globe to opine on the world’s crises and “building a better tomorrow.” Past guests have included Mikhail Gorbachev, Google founder Sergey Brin and French philosopher Bernard-Henri Levy. The press follows the proceedings like a rock concert, and the effect on the public mood is much the same. This year, Peres stirred the mix by inviting comedian Sarah Silverman and Colombian pop diva Shakira.

But Israel’s isolation is getting worse, and the parade of celebrity visitors, meant to counter it, has begun to suffer from it. In the past 12 months Elvis Costello, Carlos Santana, Gil Scott-Heron and the Pixies have all canceled scheduled concerts in deference to Palestinian boycott pressures. In April, Justin Bieber’s visit turned into an embarrassment when Prime Minister Benjamin Netanyahu canceled a scheduled meet-and-greet with the singer, reportedly because Bieber refused to meet with a group of children who narrowly escaped a Negev rocket attack. For Bieber’s millions of teenage Twitter fans, unfortunately, it was Israel that came off looking bad.

Bob Dylan was supposed to lift the mood. Lionized around the world for a full half-century as the voice of his generation, he represents that and more to plugged-in Israelis: He’s a modern-day Jewish prophet, which makes him a sort of hometown boy made good. Anticipation of his June 20 gig ran high. This made the morning-after disappointment that much deeper.

“How many years does it take until a singer learns he shouldn’t get up on the stage anymore?” wrote Yediot Ahronot columnist Eran Tifenbron in a scathing review. Others were hardly any kinder. He never made eye contact with the audience. Fans complained that he didn’t sing his great anthems (he did, but they were unrecognizable in his homogenized new arrangements and his broken voice, which seemed to catch most Israelis unawares — he sounds lately like a cross between Louis Armstrong, Donald Duck and a Cuisinart filled with rocks). Nobody clapped or sang along, except for a brief moment during his classic “Like a Rolling Stone.” Worst of all, fans and reviewers alike complained, he never spoke a word. No “Shalom Israel,” no “Glad to be here,” not even “Hello.”

“It was impossible not to feel that for Dylan, we were just another push-pin on the map of his tour,” wrote blogger Sa’ar Gamzu at the pop Tel Aviv webzine Achbar Ha’ir. “Didn’t the location of this stage in the world mean anything at all to him?”

Peres’s talkfest began the following day with a joint press conference by Peres and Shakira. She discussed her multimillion-dollar foundation, which promotes early-childhood education, and described her visit to a bilingual Jewish-Arab school that she was told represents Israel’s hopes for the future. Peres hugged her and called her “Sharika.”

That evening, Shakira discussed her education projects at length before an audience of 4,000 guests, including some 1,700 visitors and 2,300 Israelis, at Jerusalem’s convention center. In a question-and-answer session with television anchor Yigal Ravid, she described education as a way to solve violent conflicts, which drew a skeptical retort from Ravid. She was cheered, though, when she described Jerusalem as “the beginning of mankind’s search for inspiration.” Later on, former British prime minister Tony Blair was applauded when he decried Israel’s isolation and called the country “a model for this region.”

The last speaker of the evening was Israeli novelist Amos Oz. He spoke mainly about the peace process and his hope for a peace treaty between Israel and a Palestinian state, with their capitals in a shared Jerusalem. He was booed repeatedly.

Finally, after Israeli-American singer Achinoam Nini sang Hatikvah, the audience filed out. I hung around the lobby for a while, eavesdropping on conversations. From what I could overhear, nobody was sounding lonely.