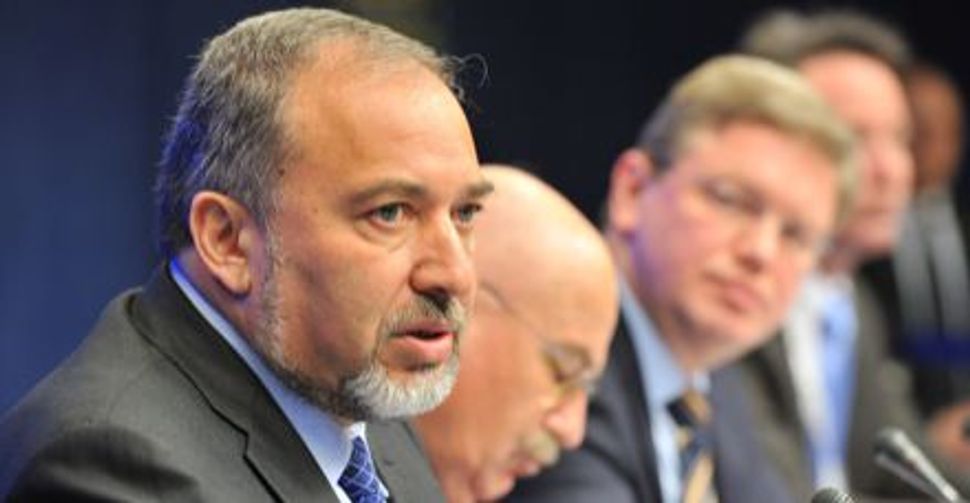 Yisrael Beiteinu is widely understood to be the party of Russian Jewry, that population of nearly one million Jews who arrived in Israel after the disintegration of the Soviet Union. Twelve years since its founding, it has become the third largest party in the Knesset, on a radical anti-clerical and staunchly nationalist platform.

Yisrael Beiteinu’s leader, Avigdor Lieberman, is the party to a large degree, and became in the wake of the 2009 elections the kingmaker in Israeli politics after Kadima and Likud emerged with pretty much the same number of Knesset seats. Lieberman chose Netanyahu, and in doing so became Foreign Minister, a most influential position when it comes to the future of talks with the Palestinians. It is probably not coincidental that since he took on the portfolio discussions have stalled and slipped into reverse in some key areas, including borders and settlements.

To understand Yisrael Beiteinu, it is necessary to understand the nature of the immigration during the 1990s, the character of the Russian/Soviet immigrants and, more broadly, the Soviet experiment from which they emerged. The philosophy behind Yisrael Beiteinu’s platform is very much defined by the character of the people who make up the party’s base.

The influx of 1 million new Russians in such a concentrated period of time placed a tremendous strain on the existing infrastructure, in particular housing and the job market. Unable to quickly integrate, Russians became ghettoised, retaining their language and customs. Many were also under-employed, spawning an attitude of resentment towards the rest of Israeli society. “Nobody here cares about your professional skills,” Irena, a Russian expatriate, told the BBC in 2004. “Israelis just see Russians as people who have come over to clean their houses, look after old people or sweep the streets.”

Yisrael Beiteinu’s stance towards Israeli Arabs — describing them as “likely to serve as terrorist agents on behalf of the Palestinian Authority” and questioning their loyalty — is a case of the bullied becoming the bully. It is a reflection of the failure of Russian Jews both to successfully assimilate themselves into the wider community and on Israeli society’s refusal to fully embrace fresh migrants whose values differ on matters of piety and philosophy from theirs. The ire of these Russian Jews, however, has turned not towards the majority that have rejected them, but the minority that can’t argue back.

Yisrael Beiteinu has a strikingly Soviet response to the question of resolving the Israeli-Palestinian conflict. Soviet historian David Shearer in his essay “Elements Near and Alien” asserted that the Kremlin governed the empire as a succession of “special areas,” which required careful management. As such, in borderland regions judged to be more vulnerable to external, non-socialist influences, so-deemed untrustworthy national groups were transported en masse to ‘safer’ parts of the union. This was the rationale behind, for example, the wholesale deportation of Crimean Tatars from the Ukraine to Uzbekistan and the Kazakh steppe in 1944.

The Lieberman Plan for conflict resolution sees the Levant through this lens, but elects to transfer the land, attaching the people to it. Lieberman’s thesis is that the current consensus on a two state solution is “based on a disturbing disparity,” namely one that calls for “a Palestinian territory with no Jewish population and a Jewish state with a minority group comprising over 20% of the general population,” the Arabs. To counter this perceived demographic imbalance, Yisrael Beiteinu proposes annexing all settlements on the West Bank which rest along the Green Line, thus abandoning some outposts and in return areas of Arab concentration in the Galilee and Judean Desert would become part of an autonomous Palestine.

Sovietised Jews are also defined by their secularism and loose affinity to Judaism, having come from an aggressively atheistic culture where Jewishness was classed not as a faith but rather a nationality or ethnicity. As such of the 1.3 million Russians currently living in Israel, as many as 500,000 are not considered to be Jewish based upon halakha, Jewish law. Moreover, some 80,000 of those classified as Russian Jews are in fact Orthodox Christians.

Yisrael Beiteinu, then, if not a secular party, is certainly an anti-clerical one. Lieberman has gone to war with his coalition partners, including the ultra-Orthodox Shas party, over his proposal that “all Israeli citizens have to either enlist for the army or National Service” (the Haredim currently are exempt) in order to “affirm their loyalty to the State” and “be eligible for any state benefits.” The latter is important since ultra-Orthodox Jews are reliant on welfare to sustain their way of life: more than 60% of Haredi men do not hold regular jobs in order to focus on religious study. Lieberman also seeks to weaken the Haredim’s influence in Israel by the “easing of the conversion process for those who wish to join the Jewish people.”

So although their franchise has expanded to the point that, in 2009, around half their votes came from non-Russians, Yisrael Beiteinu remains at its core a decidedly Sovietised institution. The way it perceives the Arab-Israeli conflict and the character of the Jewish state is inseparable from the Russian experience both before and after the collapse of the Soviet Union.

Although there has been talk recently of a new coalition or pact between Likud, Kadima and Atzmaut — the party of Ehud Barak — it seems more likely that Yisrael Beiteinu will remain part of the government, and that Avigdor Lieberman will continue as Foreign Minister (corruption charges pending). While he and his party remain an influence in Israeli politics, we should try to understand them a little better. Writing off this political manifestation of Russian Jewry as simply a fringe influence clearly isn’t going to work anymore.

Liam Hoare is a freelance writer and graduate student at University College London’s School of Slavonic and East European Studies.