Independence Day for an American Rabbi 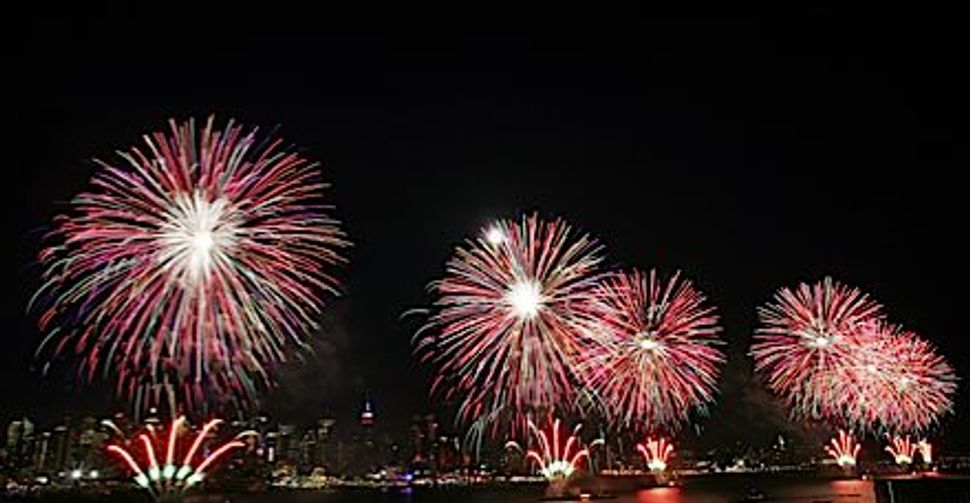 THUNDERING MESSAGE July 4 is a reminder to spiritual leaders that they can do do more to create a just world. Image by Getty Images

In 1914, Mary Antin, an American Jewish writer and immigration activist, described the founding of the United States in biblical terms:

I have chosen to read the story of ’76 as a chapter in sacred history…. Once the thunders of God were heard on Mount Sinai, and a certain people heard, and the blackness of idolatry was lifted from the world. Again the voice of God… shook the air above Bunker Hill, and the grip of despotism was loosened…. Let the children of the later saviors of the world be as faithful as the children of the earlier saviors and perhaps God will speak again in times to come.

Independence Day, in Antin’s imagination, becomes the American Shavuot: the moment when the holy document — in this case, the Declaration of Independence — is transmitted to a newly liberated people.

I must say that much of Antin’s rhetoric clashes with my own theology and sense of history. I do not believe that God micromanages human political history. And I have seen enough violence committed in the name of religion to recoil from any suggestion that God might take sides in military conflict.

In my own work, I spend much time thinking about the role that Jews and, more specifically, rabbis should play in American and Canadian politics. In this work, I have gotten to know dozens of rabbis who are deeply engaged in creating a more just world. These rabbis speak with their congregations about the issues of the moment. They organize interfaith coalitions, set up direct-service programs, advocate in state legislatures and encourage members of their communities to do the same

In some cases, these rabbis tell me that their communities welcome this political involvement. Members take pride in their rabbi’s moral stands and in his or her willingness to jump into difficult matters. But in other cases, rabbis fear losing their jobs if they take stands on issues. They hear from their congregants: “Rabbi — stick to the spiritual. Stick to the ritual. Stay out of politics.” This is especially true when the rabbi steps into a controversial issue, such as labor, health care or criminal justice.

But as Antin reminds us, the voice of God shakes the grip of despotism. The Torah is a political document, and Judaism is a political religion. To relegate the rabbi to speaking about only the Sabbath and kashrut would be like reading the Torah but skipping the book of Exodus.

The role of a rabbi is to be a moral leader. As a moral leader, the rabbi frames contemporary debates in religious terms, guides his or her community toward involvement in the public square and sometimes takes risks to do what she believes to be right.

This rabbinic role begins with hearing the voice of God, as transmitted through the sacred texts of our tradition. This means engaging our communities in conversation about how our inherited wisdom might respond to today’s political questions. Beginning with text study allows us to cut through the right-or-wrong rhetoric that often blocks real conversation, because our texts and history guide, challenge and complicate our approach to the issues of the moment. As Jews, we begin these conversations with Torah and other sacred texts. As Americans, we also bring to the conversation the sacred texts of our nation. And as people deeply engaged in our communities, we also listen to the voices of real people and allow their voices to deepen our understanding of the text.

But the work does not end with text study. In the Torah, the revelation on Mount Sinai is followed by laws necessary for creating a civil society. In the United States, the signing of the Declaration of Independence on July 4, 1776, led eventually to a Constitution, a Bill of Rights, amendments, and an evolving history of case law and interpretation. Our sacred documents ultimately inspire us to take concrete action to establish a better world.

The role of rabbis, and of Jewish communities, is to engage our communities in study and then to roll up our sleeves and join the project of building and rebuilding America. Thousands of rabbis — along with their communities — are working to ensure that the United States lives up to the ideals laid out in the Declaration of Independence. This means fighting human trafficking and modern-day slavery, ending state-sponsored torture and ensuring religious freedom for Muslims and all other Americans.

This Fourth of July, we remember that America’s founders were listening for a divine voice guiding the creation of a nation committed to liberty. On July 5, we return to the sacred work of creating a just society, seeking to ensure that “God will speak again in times to come.”

Rabbi Jill Jacobs is the executive director of Rabbis for Human Rights — North America. Her most recent book is “Where Justice Dwells: A Hands-On Guide To Doing Social Justice in Your Jewish Community (Jewish Lights Publishing).

Independence Day for an American Rabbi