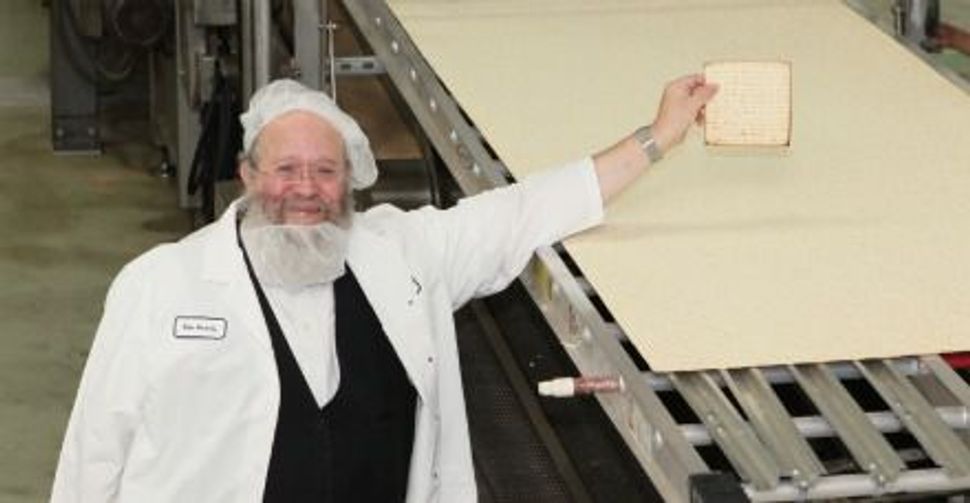 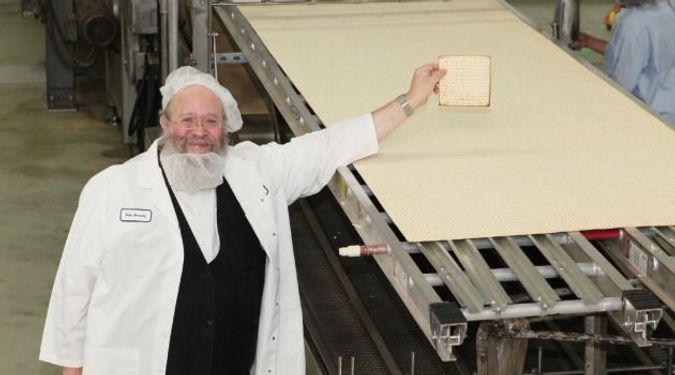 Holy Matzo: Rabbi Yaakov Horowitz, a supervising rabbi at Manischewitz, compares a regular sheet of matzo with the giant matzo on the machine behind him at the firm?s Newark factory. Image by Peter Morehand

“Holy Matzo!” a recent Forward headline read. The accompanying article announced the baking of the “world’s largest matzo” — 82 square feet — to mark the opening of the new Manischewitz matzo factory in Newark, N.J.

The matzo proved ephemeral; it was soon broken up and distributed. What I found fascinating at the factory’s opening (which I attended) was an off-the-cuff remark by Israel’s chief rabbi, Yona Metzger, before he blessed the plant. “Who knew,” he quipped, “that the world’s largest manufacturers of gefilte fish were two Moroccan Jews from Casablanca?”

Manischewitz, founded in 1888 in Cincinnati, once symbolized the emergence of Eastern European Jews on American soil. Dov Behr Manischewitz, the company’s founder, hailed from Memel in Lithuania and spun gold in the New World by discovering new ways to combine flour and water. The technological innovations introduced by Manischewitz and his sons revolutionized the production of matzo in America and catapulted Manischewitz’s company into the world’s largest producer of Passover matzo.

What had been, before the founding of Manischewitz, a product that for the most part was handmade, locally distributed and round became, thanks to the man from Memel, a universally recognized brand of matzo: produced and packaged by patented machines, distributed internationally and shaped in the form of a square.

By the 1920s, Manischewitz produced 1.25 million matzos per day and claimed that it delivered matzo to “80% of the Jewish population of America and Canada.” Building on its success, it branched out into other Jewish foods, like gefilte fish, chicken soup and borscht. In 1947, it licensed its name to a line of sweet kosher wines produced by the Monarch Wine Co.

Thanks to one of the most brilliant advertising campaigns in the history of American kosher food, “Man, oh, Manischewitz” became a well-known slogan. Apollo 17 astronaut Eugene Cernan actually exclaimed that phrase during a moonwalk in 1973.

Eventually, like such well-known, family-based ethnic food companies as Ronzoni, Franco-American, La Choy and Lender’s, Manischewitz outgrew the family that established it. Bernard Manischewitz sold the company to Kohlberg & Co., L.L.C., in 1990; Kohlberg sold it to RAB Enterprises in 1998, and in 2007 it was sold again, this time to Harbinger Capital Partners.

Today, the Manischewitz Co. has moved far from its Eastern European roots. Indeed, its Moroccan-born co-CEOs, Alain Bankier and Paul Bensabat, reflect the changing face of America’s increasingly diverse and polychrome Jewish community. Sephardic Jews with roots in the Middle East, often known as Mizrahi Jews, form part of a sub-community that now comprises somewhere between 4% and 10% of all American Jews. And their numbers are growing.

America’s earliest Sephardic Jews arrived back in 1654. They maintained close ties with the Iberian-Jewish diaspora, incorporated Portuguese into their prayers and, in many cases, preserved memories of time spent practicing Judaism underground, as crypto-Jews in the face of Jewish expulsions. By the American Revolution, however, Central European Ashkenazim, with whom they tended to intermarry, outnumbered this elite group of Sephardim (today known as Western Sephardim). Few of their descendants maintain Sephardic traditions today.

A second group of Sephardic Jews arrived early in the 20th century from the collapsing Ottoman Empire, places like Salonica, Monastir (today known as Bitola), and the islands of Rhodes and Marmara. These Levantine Jews (today known as Eastern Sephardim) spoke Ladino and numbered in the thousands, but were dwarfed by the more than 2 million Yiddish-speaking Eastern European Jews who arrived at about the same time. For years, Ladino-speaking Jews harbored grievances against insensitive Ashkenazim who questioned their Jewishness, viewing them with disdain. In cities like New York, Seattle, Los Angeles and Atlanta, they proudly maintained their distinctiveness by establishing synagogues and sub-communities of their own.

Alain Bankier and Paul Bensabat represent the arrival of a large third wave of Sephardic Jews, with roots in Arab lands. These Jews, like so many before them, came to America seeking opportunity and to escape persecution and privation. Descending from families that have, in many cases, generations of experience in business, they appreciate the freedoms that America extends to them. Now that this immigrant group has mastered English and even begun earning advanced degrees (both Bankier and Bensabat boast MBAs from New York University), they are rapidly climbing the ladder to success.

So it is more than just a curiosity that an Eastern European Jewish firm named Manischewitz is currently headed by two Moroccan Jews from Casablanca; it is a sign that a whole new community of Jews is emerging on the American scene. While the “world’s largest matzo” may have been ephemeral, the rise of Mizrahi and other immigrant Jews will change the face — and the tastes — of the 21st-century American Jewish community.

Jonathan D. Sarna is the Joseph H. & Belle R. Braun professor of American Jewish history at Brandeis University, and chief historian of the National Museum of American Jewish History. His newest book, “When General Grant Expelled the Jews,” will be published next year by Schocken/Nextbook.