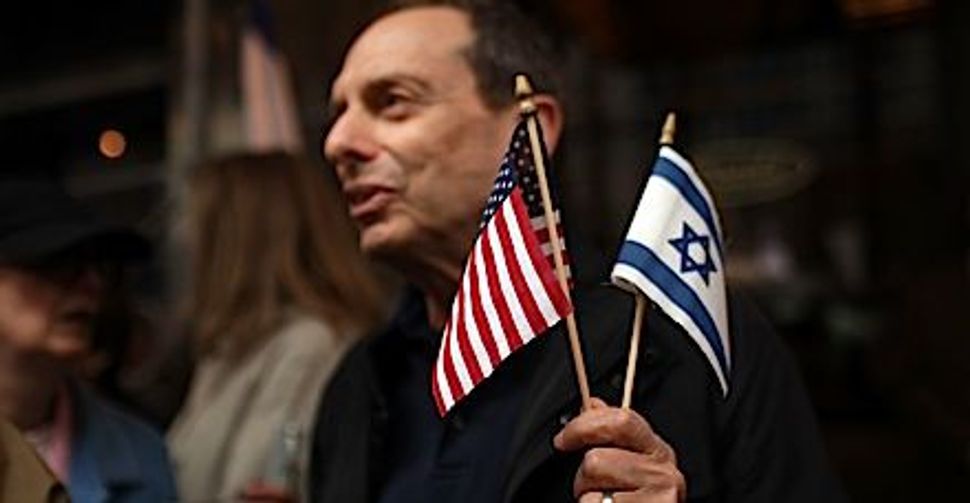 Irreconcilable?: A Jewish activist waves U.S. and Israeli flags during a protest in front of the Israeli Consulate to denounce a speech made by President Obama on May 20. Image by Getty Images

The Jewish press has been abuzz in recent months with debate about the extent to which liberal-minded American Jews and, more specifically, their rabbis, are distancing themselves from Israel politically, morally or even religiously. In light of this situation, there is a growing concern among contemporary Zionists that liberal-minded Jews will soon find themselves with a generation of rabbinic leaders whose commitment to the State of Israel is attenuated at best and downright hostile at worst.

These concerns, voiced especially by Daniel Gordis, a popular thinker and writer, have been vastly overstated: From my experience, liberal-minded Jewish seminarians are engaged with Israel, spend time there, speak Hebrew and will continue to do so in their American rabbinates. Yet there is indeed something amiss about their relationship with Israel — and it’s not what people think.

A little more than a year ago, in his widely disseminated essay in The New York Review of Books, Peter Beinart pointedly observed that outside of the Orthodox world, younger American Jews (whose parents and grandparents were overwhelmingly Zionist throughout the 1950s and ’60s) have indeed drifted away, over the past 20 or 30 years, from traditional American Zionist advocacy groups such as the American Israel Public Affairs Committee. Sometimes this drift may reflect apathy, and sometimes it may reflect genuine anger and disaffection.

Whereas Beinart and others, however, have described the genesis of this drift in terms of specific failures on the part of either Israeli politicians or American educators, the tension between liberal-democratic commitments and Zionist commitments actually exists on a much deeper and potentially irresolvable level. And we are beginning to realize that the cultural confluence of American liberal democracy and strong Zionist sentiment may actually have been an aberration.

The fact is, liberal commitments and traditional Jewish commitments are in many ways incompatible. They conceptualize political freedom differently, civic responsibility differently, personhood differently and nationhood differently. The American political tradition, emerging from thinkers like John Rawls and Isaiah Berlin, generally construes political freedom as freedom from our fellow citizens (that is, as long as we don’t hurt anyone, we can more or less do as we please). But Jewish tradition, with its robust emphasis on norms of tzedakah and communal obligation, takes a more communitarian approach. And whereas American political life pushes us to construct our civic identities around such phrases as “I am” or “I want,” the Zionist tradition pushes us to construct those same identities around phrases like, “We need.” Good fences may indeed make good neighbors, but they make it a lot harder to construct an eruv.

Historically, of course, one of the problems with communitarian societies is that they aren’t always so successful at negotiating difference. To the extent they assume that all members of the group want more or less the same thing, they emphasize a kind of tribalism that is frankly distasteful to the liberal-democratic palate and ­— particularly, perhaps — to the American one. While socialism works quite well in relatively homogenous countries, like those of Scandinavia, it is much harder to implement effectively in a country like ours, which, to our great pride, boasts a wealth of cultural and ethnic diversity. And while traditional Jewish life does a great job of solidifying group identity, it likewise creates a kind of insularity that, when combined with political and military power, can produce the kind of legal and religious prejudice at once anathema to liberal sensibilities and (in all likelihood) absolutely indispensable to preserving the “Jewish character” of the Jewish state.

Jews have, with good reason, been fierce proponents of liberal democratic states throughout history. But from the perspective of American civic participation, the communitarian, tribe-centered approach of both the religious Jew and the committed Zionist is a very radical notion. The ritually observant Jew commits herself to a life that separates socially, visually and physically from the surrounding world. And the liberal-minded Zionist, who is deeply, genuinely concerned about the welfare of the Palestinians and the fundamental “fellowship of man,” nonetheless affirms that the Jewish democratic state must maintain a Jewish majority and a “Jewish character.”

And for my liberal-minded rabbinic colleagues — most of whom hold full participation in both ritual Jewish life and American civic life as high, religious values — this tension is particularly poignant.

So although recent hand wringing about whether or not the new generation of liberal rabbis is committed to Israel is misplaced — we overwhelmingly are committed — our current discourse on the subject could use a healthy dose of honesty about what the challenges are. By all means we need to talk about politics, and by all means we need to support dialogue between Israelis and American Jews. But we also need to turn our attention inward and think carefully about how (and if) we can integrate these conflicting values.

Benjamin Resnick is in his third year of rabbinical school at the Jewish Theological Seminary of America and just returned from an academic year in Jerusalem.