Looking for My Birthright in All the Wrong Places 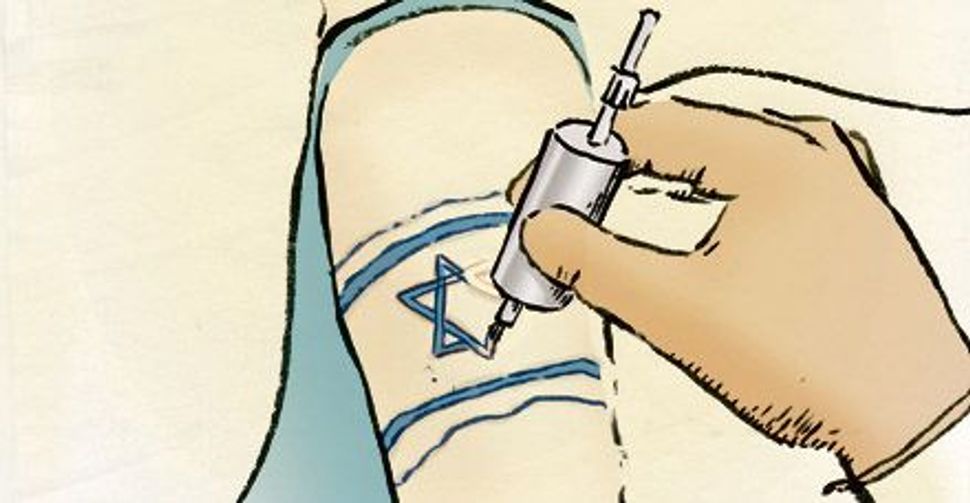 Birthright was not going to get me. I had heard about the brainwashing propaganda party that takes place on these 10-day free trips to Israel. I was well aware of Birthright’s intent, and pretty darn sure that it couldn’t possibly work on me. I was there to see the land, learn about the culture and return unscathed.

What I left my mind open to, however, was the possibility for things to get, well, emotional. Every friend and relative who had gone before me seemed to have the “single most emotional experience” of his or her life on Birthright, followed by that declarative fact, “It changed my life.” And while I’d heard some of those same people declare eerily similar words in regard to their experience at a Phish reunion tour, I knew that the places we were going to visit had the true potential to break down even the most staunchly anti-sentimental, un-tuggable hearts. I didn’t plan to get carried away, but I definitely had hopes of feeling something. If I wasn’t ready to see the light, I could at least catch a glimpse of its shadow.

This, of course, is what led to the event that I will affectionately refer to as the Western Wall Disaster.

When searching for your perfect place to have the single most emotional experience of your life, it doesn’t get much better than the Western Wall. Jews tuck their folded up notes of wishes and prayers into the cracks of the wall, put their foreheads up to the stone and simply burst into tears at the sheer weight of it all. They are uncontrollable, these emotions, and whether you’re sending hopes for Grandma’s recovery or reconnecting to the Judaism you lost while going to college in Iowa, this is the place where it all goes down. And by God, it’s going to feel amazing.

I found a spot just wide enough for me to rest my palms against the wall, and my forehead in between them. I shut my eyes and waited for my promised moment.

And while waiting, my thoughts went something like this:

I’m afraid it didn’t get much better than that. I walked away from the wall to find people from my trip sitting on fold out chairs and crying, their heads hung low in that communal but lonely sulk of the serious.

When I talked to my boyfriend on the phone that night, I told him that I flunked the Western Wall. “Does this mean I don’t have a soul?” I asked. I know I didn’t want to be duped into the serious business of changing my life, but it also wasn’t entirely untrue that I secretly hoped for that to happen anyway. It was complicated, okay?

I won’t keep you waiting: There wasn’t a single experience in Israel that changed my life.

There were people that did some major damage, though. There were the Israelis from the trip — by far the most passionate and strong-willed people I had ever met. They were 20-somethings, most of them younger than I, with more love for their country and understanding of its history and current situation than I can possibly fathom as an American. They are not afraid to fight for Israel, and they are not afraid to admit that they are scared while doing so.

And the best part is, they have fun, too. The majority of our time was not spent sitting in a circle in the hotel bomb shelter, talking about army experiences and the possibility of achieving peace. Most of it was spent singing Beatles songs on the grass, an Israeli submarine captain playing the guitar. Or debating about the best flavor of Magnum ice cream bars, or having the obligatory trade-off between each language’s dirtiest phrases. The same female soldier who pressed a button and watched three enemy bodies explode into a million pieces on a black-and-white screen sang at the top of her lungs until we all learned the Hebrew word for “shut up.”

Before I went to Israel, I didn’t spend any of my time thinking about the people who actually lived there. I thought about the place itself, the strange power it holds. But Israel is not some meaningful-experience theme park where the price of admission comes along with a free religious awakening.

The land itself is not magic, and declaring it so takes away from the people who inhabit it. Their passion and belief were not the prize at the end of a hyperactive 10-day trek. It’s something they live for and work for on a daily basis, and something I don’t think I could ever fully achieve.

Molly Tolsky is the editorial assistant at MyJewishLearning and Kveller.com. She holds an MFA in fiction writing from Sarah Lawrence College.

Looking for My Birthright in All the Wrong Places