The Death of Peoplehood 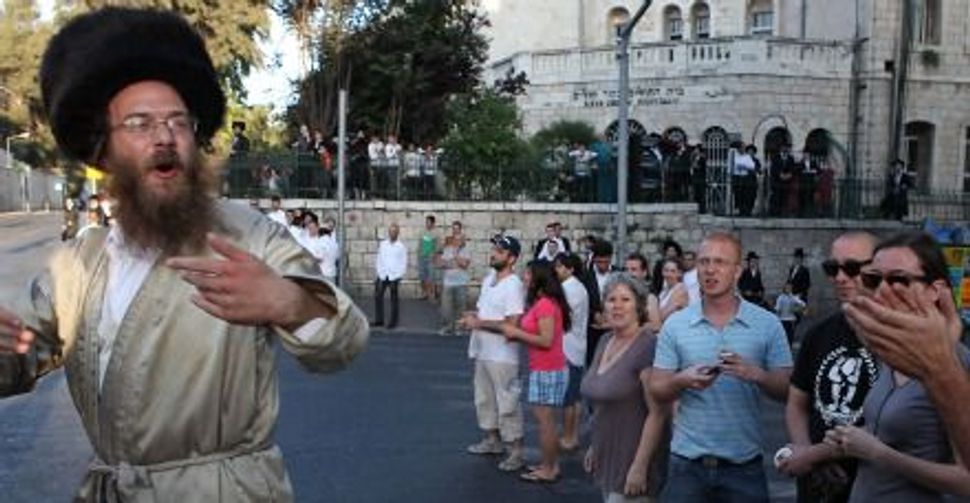 Peoplehood First: An Ultra-Orthodox Jewish protester and secular Israelis square off in Jerusalem on July 23 in a dispute regarding the Sabbath. Image by Getty Images

Recently I had an upsetting e-mail exchange with an old friend. A prominent, politically active Jewish conservative, he told me that he had long ago given up trying to convince American Jews on the left to support Israel. “I don’t really see them as family anymore,” he wrote. “I’ve found a new family, the American Right.”

Heavy words — words that many Jews on the left can relate to, as well. Long sensitized to anything that smells of “neocons” and “Likud politics,” they, too, have cut themselves off from their conservative kinsmen, disavowing any sense of common destiny or “family” that once gave the word “Jewish” its most poignant, deepest valences.

But I just can’t swallow it. Maybe I’m naive, but I’ll never accept what looks a lot like the end of Jewish peoplehood.

I know, I’m oversimplifying. With so many Jewish “umbrella” groups, Jewish community centers, federations and so on, it’s easy to believe that, at least on the face of things, Jewish peoplehood in America is thriving. Yet, something does seem to be dying in the American Jewish fire. The infighting among Jewish groups, the polarization on Israel and the willingness to demonize whole communities of fellow Jews have become so extreme that one begins to wonder what, exactly, is left of the Jewish family.

Alienation from Israel is only the most blatant example. For decades, American and Israeli Jews have been growing apart, separated by radically different experiences and by cultural developments. But as Shmuel Rosner points out in his new book, “Shtetl, Bagel, Baseball” — it’s in Hebrew and a best-seller in Israel — most American Jews have little or no awareness of the experience of Jews today anywhere outside the United States.

But that’s only the beginning. Take religion. In many non-Orthodox communities, the focus on universal values threatens to eclipse any passionate concern for the fate of fellow Jews not just in Israel, but also in France or Argentina or anywhere else; among the Orthodox, religious practice and the repudiation of “modernity” have become a litmus test for inclusion, turning peoplehood into a distant memory. For these Orthodox Jews, there is no Jewish people, only frum people.

But as my friend’s e-mail shows, the problem may be at its worst when it comes to politics. Here, American Jews are ferociously divided, with each side accusing the other of fraternizing with a perceived enemy.

For Jews on the left, conservatives have joined forces with that most fearsome part of America, conservative Christians, to undermine the liberal, secular space that Jews have worked so hard to carve out for themselves as the real solution to the Jewish problem.

For Jews on the right, liberals have joined forces with pro-Palestinian activists, universalists and others who threaten the Jewish state that we worked so hard to create and protect as the real solution to the Jewish problem.

Jewish identity used to be about putting peoplehood first. In the Bible, we were a people before we had a religion. In the Talmud, the rabbis said that “baseless hatred” among Jews was the true cause of our exile. After the Holocaust, Jews rallied together to help build Israel and then, later, to save a million of their brethren from Soviet oppression. Today, it feels like Jewish identity is defined by our ability to write off other Jews.

Okay, you say, enough carping. What’s to be done?

The answer, of course, begins first with recognizing the depth of the problem. The word “Jewish” has become a shadow of its former self and needs to be reinvigorated with profound, inclusive meaning. To overcome the religious divide, it needs to reflect attention to a collective tradition, biblical and rabbinic, bracketing out the bitter disagreements over authority and authorship of texts. To overcome the political divide, it needs to suggest a family bond, and a deeper set of cultural traditions and instincts that transcend mutual fear and distrust, the idea that there’s nothing wrong with seeing our Jewish political adversaries as “crazy cousins” whom, despite our disagreements, we love nonetheless.

And to overcome the geographical divide, it needs a serious effort of translation, an assertion that the experiences of Jews elsewhere in the world, both positive and negative, are not less valuable just because they take place in a foreign language.

All these have sharp policy implications for rabbis, lay leaders, educators, philanthropists and other decision makers. But first we need to agree on what was once axiomatic: Peoplehood before politics, before religion, before geography. That is the Jewish way, and our only way forward.

The Talmud teaches that, like traditional Jews, God, has a pair of tefillin that he puts on every day. Yet instead of “Hear O Israel, the Lord Our God, the Lord is One,” the verse inscribed in God’s tefillin is a different one: “Who is like your people, O Israel, one nation on earth?” Our monotheism, the rabbis taught, is met by God’s mono-nationalism. Will we ever feel that good about ourselves again?

The Death of Peoplehood