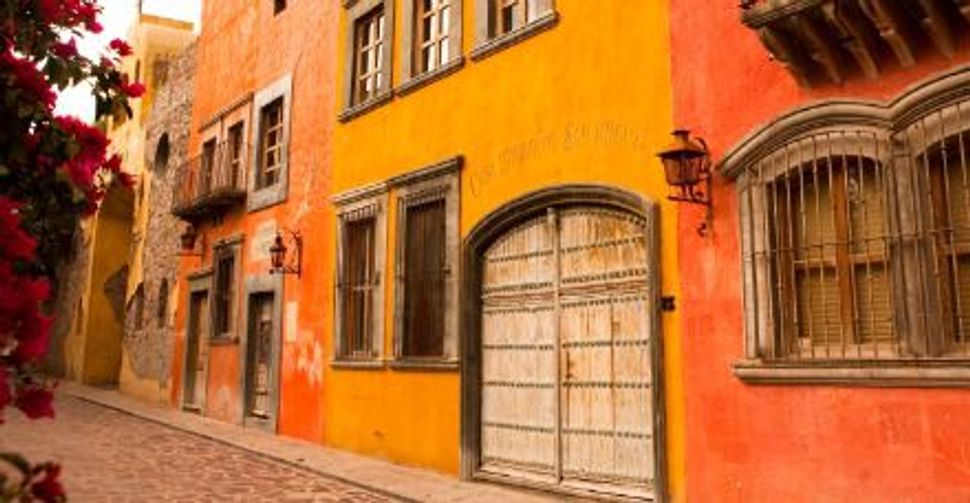 Recently my family and I were traveling in Oaxaca, Mexico — a place about as far away from Middle East politics as one might think, so I assumed. Then one evening, walking through the cobblestoned streets of the old city, I came across a wonderful looking artist’s hangout, the Café Lobo Azul (the “Blue Wolf Cafe”).

Judging by the majority of the patrons, intently bent over their Macs, it appeared to be somewhat of an intellectual hub. I peered further into one of the oversized windows of the renovated single-story 19th-century colonial building, and my eye was immediately drawn to a large poster of an Israeli flag, overlaid with the word “Boycott.”

Rattled — but also curious — I entered the café and saw that every wall in the establishment was decorated with a political cause, ranging from a rendered portrait of Che Guevara to “Free Libya!” The owner was obviously up to date. Yet, a noticeable majority of the posters were devoted to Israel’s “crimes against humanity” and to the occupation of Palestine.

I inched my way to the back and found a young, pleasant-looking Mexican man in his mid 40s, wearing cargo pants and a knitted Rasta cap. He seemed a little more authoritative than the other waiters and waitresses, and I asked him who the owner of the establishment is.

“Why, I am!” he proudly declared. “Mind if I ask you about one of your posters?” I inquired. “Of course, of course,” he replied, as if explaining the stories behind his acquisitions were the best part of his job.

I walked him over to the “Boycott Israel” poster, now framed by a couple of Australian backpackers who had just seated themselves, taking advantage of the free Wi-Fi, and asked him if he understood that to a Jew, the word “Boycott” next to a Star of David is loaded with historical implications. He shrugged his shoulders. I then asked him why he would advocate for the collective punishment against the citizens of Israel while at the same time feature another poster, a few walls down, that chastised Israel for collectively punishing the citizens of Gaza. Dismissing the comparison, he proudly stated that he, in fact, had been to Gaza and, furthermore, several young Israelis and Jewish travelers who had passed through his cafe had complimented him on his stance — in effect, giving him the protection he needed to feel comfortable countering criticism from people like me.

Before I left the cafe, I told him that I hoped he’d never have to experience being boycotted himself, but I could see that my words were too abstract to be taken as anything more than wild-eyed prophesy. I returned to my hotel room. confused as to why I was taking it so personally. After all, it’s not as if the call to boycott Israel is an anomaly these days, or that there’s any shortage of malcontented Jews and Israelis publicly attacking the policies of the present government. Still, there was something about this remote place, at this pivotal time, as well the casualness and ease with which such a poster was hung up, that felt alarming — almost as if, if it could happen in Oaxaca, it could happen everywhere.

Upon returning to my hotel room, I described the experience to my wife and daughter, and at one point jokingly said that I should go down to the cafe and stand outside the door with a boycott sign so that the knows how it feels.

Half an hour later, with a couple of pieces of cardboard, my daughter and I parked ourselves outside the Café Lobo Azul, holding up our “Boycott” signs (with little further explanation), making passers-by feel uneasy as they entered, or occasionally decided not to enter, the cafe. It was a busy street on a Friday night, and no doubt a little girl and her gringo father attracted quite a bit of attention. We marched for only half an hour, and the economic impact on the establishment was minimal. That wasn’t my intention. But for a short while, I saw the owner quite concerned, his staff darting out to the sidewalk to see if our protest was having any effect. Although I have no idea whether the poster remains hanging there today, I feel satisfied that not only was I able to make the owner understand the seriousness of his call to action, but, hopefully, I also instilled a lesson in my daughter that it is not enough to remain passive in the face of a world that will most likely grow more hostile toward Jews in the coming years.

With all the debate going back and forth regarding the passage of the new law in the Israeli Knesset, which penalizes those in Israel who call for the boycott of a fellow countryman’s products or specific region, it’s important to remember that the law does not take away one’s ability to choose what one buys or does not buy; it merely gives the boycottees some deserved protection. Otherwise, what would stop people like my daughter and myself from closing down a number of legitimate businesses because their politics didn’t mesh with our own?

Perhaps, more important, the cafes of the world — and numerous other institutions, trade unions and governments — will not be able to take cover from the knowledge that Israel’s own citizens are doing the same, and they certainly won’t be able to differentiate between a farmer in the West Bank, a baker in the Jewish Quarter or a waiter working in a coffee shop in Tel Aviv.

Oren Safdie is a playwright and screenwriter whose most recent play is “The Bilbao Effect.”