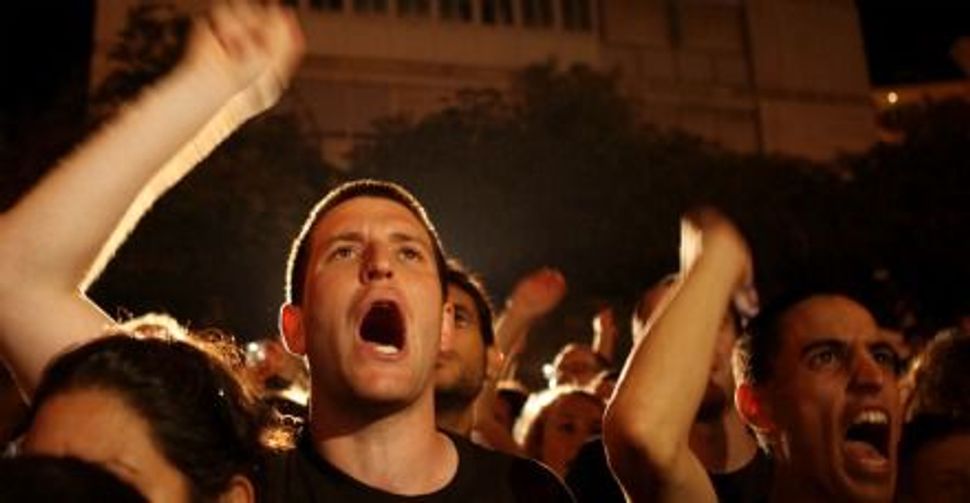 “The People demand social justice.” That’s the slogan, the chant of more than 300,000 people in dozens of sites across Israel. And just maybe, the State of Israel is now entering the third chapter of its history as independent.

During the first chapter, which extends from Israel’s founding in 1948, to 1977, 29 years of Labor hegemony embedded principles of social democracy. This was a remarkably inefficient bureaucracy that ineptly subverted the vision of building Israel on the Scandinavian model.

“The third way,” as it came to be known, tried to make a path between the raw capitalism of the United States (little did they know how raw it would become) and the brutal tyranny of the USSR. This was a restless system, marked by an abundance of voluntarism as well as a surfeit of favoritism and stifling paternalism — in all, the consolidation of statehood.

And then, in 1977, came the displacement of the old elite, David Ben-Gurion, et al., by Menachem Begin and his populist nationalism (spilling over into jingoism), and then by Begin’s heirs and, in particular, by Benjamin Netanyahu, devotee of radical privatization, indifferent to rapidly growing income inequality, a transition from obsession with the collectivity to a much greater focus on the individual, a chapter that would last for 34 years, up until — well, up until July 2011.

Now, in the wake of the utterly surprising social protests that have engaged hundreds of thousands of Israelis — there’s even talk of a million-person march in early September — one can see the outlines not only of a shift from the unbridled privatization that has marked the Netanyahu administration, but also of a generational shift. Netanyahu appears increasingly out of touch, locked in a stale and utterly unpersuasive rhetoric, surrounded by a cast less of has-beens than of never-weres.

However all this plays out — and, as promising as it seems, one cannot discount the ability of anachronisms to hang on long after they have been discredited — there is a near giddy sense of hope that infects much public discourse these surprising days. It is captured in an endless flood of e-mails and blogs, expressing a sense of wonderment: Just when the veteran social justice activists were readying themselves to recite prayers of mourning, just when they feared the battle for a humane and responsible Zionism and for a humane economy was lost, a whole new generation has taken to the streets, demanding social justice.

Amos Oz, in a front page article in Haaretz, had this to say about the resources that might be directed toward social justice in Israel: “First, the billions Israel has invested in the settlements, which are the greatest mistake in the state’s history, as well as its greatest injustice. Second, the mammoth sums channeled into the ultra-Orthodox yeshivas, where generations of ignorant bums grow, filled with contempt toward the state, its people and the 21st-century reality. And third, and perhaps foremost, the passionate support of Netanyahu’s government and its predecessors for the unbridled enrichment of the various tycoons and their cronies, at the expense of the middle class and the poor.”

As Oz goes on to say, it is “profoundly moving to see the protest veterans of all generations, who for years were a voice calling in the wilderness, spending time in the tents of the youngsters, who are wisely leading the new protest.”

It is, indeed, tempting to herald a new day. But such an announcement remains, for now, tentative and possibly premature. The policies and proposals that have led to these monster demonstrations, which have resulted in a proliferation of tent cities and in the swiftness of entrenched forces to dismiss the protests, offer a sobering reminder of how divided Israeli society has become. Forty-two members of the Knesset, including a number of government ministers, have responded to the protesters’ demands for more affordable housing by urging that new housing be built for them in the West Bank and in East Jerusalem. Forty Knesset members have offered a bill that would change Israel’s classic self-definition as a ”Jewish and democratic state” to “the national home of the Jewish people.” That same bill also ends the status of Arabic as one of Israel’s official languages. Thus, the denigration of democracy that has been a-building these past many months has now become explicit, enthusiastically supported by the settlers and the vast majority of Russians.

But the weightiest challenge to the protesters comes not from the outside. Sooner rather than later, the protesters, who are a very mixed multitude, will have to define what they mean by “social justice” and will have to develop a political structure reflecting that definition. They, who are overwhelmingly middle class, will have to make room for the full-fledged participation of Israel’s working class and its disadvantaged sectors, and also its Arabs (21% of the population). They will have to understand that the existing system of privilege, which is the source of the protest’s outrage, has immense organizational advantages and a cadre of beneficiaries who can and will show up early in the morning, every morning, and stay until very late at night, in order to protect their privilege.

In short, it will have to move beyond demonstrations and into Israel’s tangled political web, while preserving the enthusiasm and the hopefulness that characterize it today.

No small challenge, all that. But hey, the nearly empty glass is suddenly half-full. So, just maybe, these really are the rays of a new dawn we are witnessing.