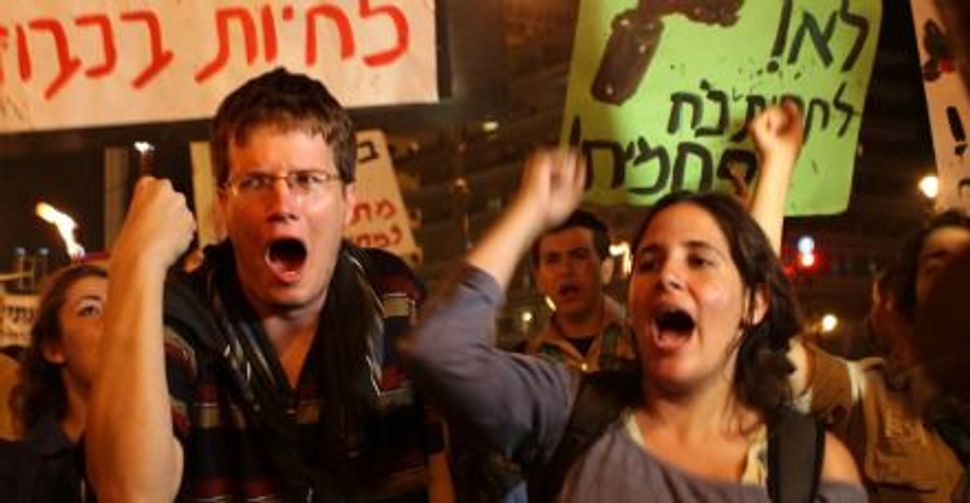 A current preoccupation of the American Jewish establishment is diagnosing why so many young Jews are alienated from the state of Israel. Theories abound, from Peter Beinart’s now famous essay on the disappearance of liberal Zionism, to the assertions that college campuses are rife with stealth anti-Israel manipulations. Millions of dollars are being spent for programming and curricula to counteract this worrisome trend.

Save the money. Save the angst. Instead, direct the attention of young American Jews to the tents and makeshift dwellings on Rothschild Boulevard in downtown Tel Aviv.

There they will find an extraordinary movement led by young Israelis that began as a simple demand for more affordable housing, but has blossomed into a national cry to recapture the kind of communal solidarity and hopefulness that has receded in Israel as economic inequality and political polarization have grown.

Though the movement is inchoate and lacking a clear direction, it has resonated swiftly and powerfully with the Israeli public, generating ever larger protests on Saturday nights and threatening a political status quo unaccustomed to being challenged on core domestic issues.

The movement’s central trope — a plea for social justice — ought to resonate just as powerfully with the young American Jews that the establishment is so fearfully chasing.

This is, after all, a generation wary of conflict and allergic to picking sides. In the U.S., they are the Obama generation, and they latched onto the promise of a new kind of politics with fierce devotion in 2008. (What’s happened since may be another story.) As the sociologist Steven M. Cohen has observed, this generation doesn’t respond to traditional, aggressive Israel advocacy because “that puts them in the conflict arena, and that’s not the arena they want to play in.”

Young American Jews are less worried about overt military threats and delegitimization and more concerned with social justice issues, the treatment of those on the periphery of Israeli society: the poor, Arabs, women, and in some cases, the non-Orthodox. Unlike their parents and grandparents — who did and largely still do support Israel without caveats or expectations — younger Jews’s allegiance is more contingent than not. As Cohen’s research shows, “Israel is to be supported so long as Israel embodies higher Jewish values.”

And what are the protestors in Israel demanding? A government that is more egalitarian and attuned to the needs of ordinary middle class Israelis than it is to the ultra-Orthodox in the political sphere and the super-rich in the economic sphere. In other words, a government that embodies higher Jewish values.

If the protestors continue to strengthen and broaden their reach, they could ignite a serious realignment in Israel’s sclerotic political landscape. But the very features that make this movement so appealing to so many — its eschewing of ideology and its focus on complaint rather than specific solution — also may hobble any grand advance. Because eventually the conversation has to pivot to politics.

The gaping inequalities that have made life so difficult for the middle class Israelis pushing strollers down the protest route are the result of government policy that channels huge sums into West Bank settlements and ultra-Orthodox yeshivas, and caters to a slender cadre of ultra-rich Israelis while cutting support for education, health care and social services. Yes, it’s the economy, stupid. But it’s also the occupation. And a skewed political system that grants a ridiculous amount of power to parties representing a fraction of the public.

So politics, and policy, cannot be avoided if the stirrings on the street are to lead to substantive, lasting reform.

In the same way, eventually, young American Jews will need to rekindle the passion they stoked in the last presidential campaign to assert their claim on a future that is being quickly decimated by the zealotry and selfishness of too many elected officials in Washington. In light of the lousy economic prospects facing so many college graduates in this country, it’s a wonder that they, too, haven’t taken to the streets, set up tents on Pennsylvania Avenue, and insisted on social justice and a return to core American values here.

For now, perhaps for the first time in a long time, they can look to Israel as a model. As older generations were inspired by Israel’s pioneers, a new generation of American Jews can find hope and inspiration from the passion pulsing down Israel’s streets.

“Neither the parties nor the veteran opposition organizations generated this protest,” wrote Amos Oz. “It was born out of the devotion and enthusiasm of hundreds and thousands of young people who swept along in their wake the best people in the country.”

And, perhaps, the best people in this country, too.