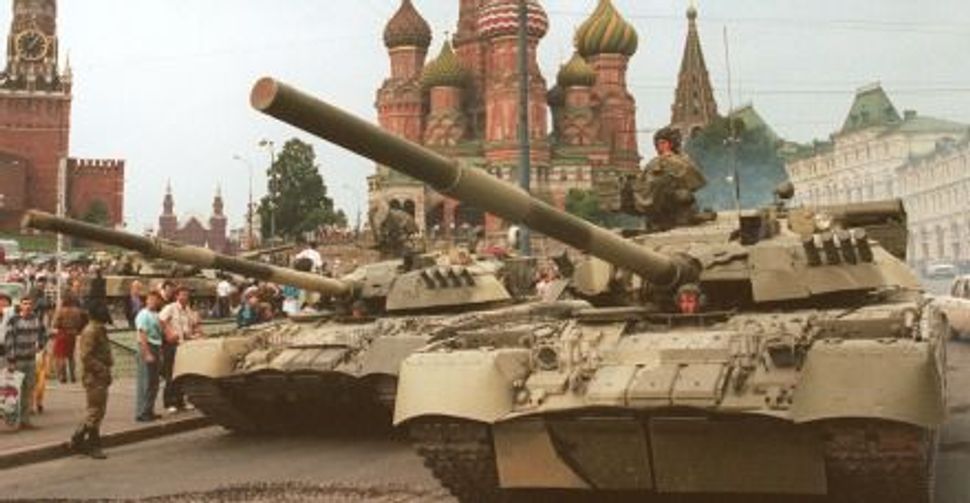 On Friday, August 23, 1991, Rabbi Zinovy Kogan received a telephone call from Boris Yeltsin’s office. Yeltsin, president of the Russian Federation, the largest republic of the Soviet Union, had emerged as a leading political figure just a few days earlier, between August 19 and 21. During those momentous three days exactly 20 years ago, Yeltsin stood at the head of the resistance to a group of Communist Party hard-liners who were seeking to have Soviet President Mikhail Gorbachev’s policies of openness (glasnost) and reform (perestroika) scaled back and authoritarianism restored. 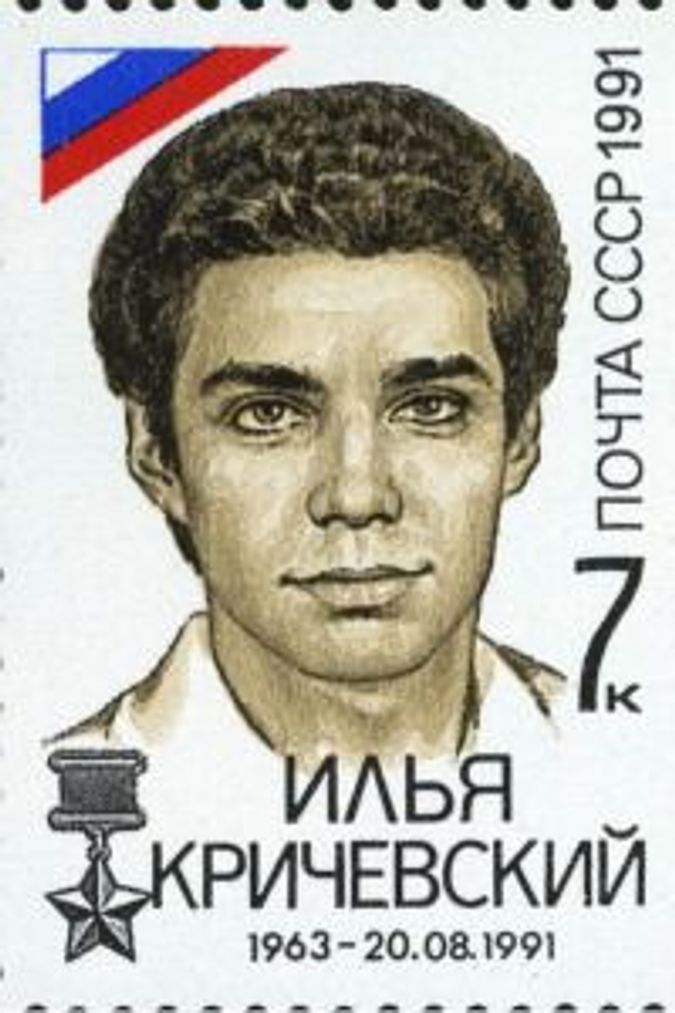 Back in the USSR: Russia issued a stamp to honor Ilya Krichevsky, a victim of the 1991 coup that helped end Communism. Image by Getty Images

Three civilians died on the streets of Moscow during the attempted coup, all of them killed when the Soviet army tried to wrest control of the streets from protesters propelled by a sense of civic responsibility never before seen in the USSR. The names of two of the victims — Dmitry Komar and Vitaly Usov — were published right away when the coup failed; it took longer to name the third victim, who was not carrying any identification on him when he was killed by a stray bullet. The call Kogan received from Yeltsin’s administration informed him that the third victim, Ilya Krichevsky, a 28-year old architect and amateur poet, was a Jew.

In 1985, Kogan, who had received some of his training in Los Angeles and London, founded Hineini. This was Russia’s first liberal Jewish congregation, whose idiosyncratic form of Judaism grew not so much out of the American-style Reform movement but rather, organically, out of some of the Jewish dissident circles in the 1970s and ’80s,where nascent interest in Jewishness merged with the secular way of life in the Soviet Union to produce a new form of cultural and religious practice. With Adolf Shayevich, Russia’s chief Orthodox rabbi, having refused to participate in the state funeral, Yeltsin’s people contacted Kogan with a request that he officiate at Krichevsky’s burial. The ceremony was due to take place the following morning, on Saturday, August 24, alongside the funerals of the other two victims.

Despite the traditional Jewish ban on holding funerals during the Sabbath, Kogan was told that a decision had been made that the victims were to have religious funerals and that if Kogan did not show up, Krichevsky would receive Russian Orthodox last rites. To bury Krichevsky a day after, separately from other victims, was out of the question: His parents wanted their son to be buried together with the two other men. Out of respect for the wishes of the parents and his concern that a priest might bury a Jew, Kogan agreed to participate.

Kogan, who is now 70, speculated in a telephone interview from his home in Moscow that Yeltsin’s decision to hold public religious funerals for the victims emerged from his understanding that the country needed to make a clean break from Soviet-era symbols. After decades of official atheism, such an event was seen as the proper way to lay the foundation of the country’s new identity, one tolerant of religious expression.

At the beginning of the ceremony, a very large gathering assembled around the three coffins at Manezh Square just outside the Kremlin walls. Gorbachev spoke and awarded the three victims the posthumous titles of Hero of the Soviet Union — the final time that this state-level award was given in Soviet history. Gorbachev and the other leaders of the country who assembled at the podium mistakenly wore red armbands, something usually worn by party leaders at official Communist celebrations. During Gorbachev’s speech, in a moment caught on camera and shown in the news programs that day, one of the organizers walked around the podium to flip the armbands — including Gorbachev’s — to the mournful black, quite literally replacing old symbols in anticipation of the Communist Party being outlawed several days later.

Metropolitan Kirill, who is now patriarch of the Russian Orthodox Church, read a prayer at the gathering, after which Kogan recited the Kaddish, the Jewish prayer for the dead. In what Kogan recalls as the first ecumenical conversation in present-day Russia, both he and the Russian priest ascertained that their prayers at this public gathering would include the names of all three victims, not just the names of their coreligionists.

At the end of the memorial service, Krichevsky’s coffin — on the agreement of his parents — was wrapped in a tallis, a Jewish prayer shawl, while the coffins of the other two victims were wrapped in the Russian tricolor flag. The procession then set out in the direction of the so-called White House, the seat of Russian Parliament and the focal point of resistance during the coup. While speaking of the victims as the camera focused on a portrait of Krichevsky, Yeltsin said that “their names are becoming sacred for Russia — sacred names for all peoples of our much-suffering motherland.” The presence of a Jew among the victims allowed Yeltsin to establish the narrative of a new Russia that would be welcoming to all its minority groups. The last Heroes of the Soviet Union were on their way to Russia’s post-Soviet sainthood.

Kogan recalls that the burial itself involved an additional violation of the religious law to which he agreed, given the circumstances. At the gravesite, Krichevsky’s parents wanted their son’s friend to play a violin, something that would violate the injunction against playing musical instruments on the Sabbath. In the end, however, the mournful tune played over the gravesite gave a Jewish feeling to this turning point in Russia’s history.

As Kogan recalls, he justified his decision to officiate at Krichevsky’s nationally televised funeral by telling himself that the Jewish prayer for the dead, pronounced before the entire country, would quell the wave of popular anti-Semitism that was palpable at the time. Though he faced reproach by other religious Jewish leaders and says he was even threatened with herem, or excommunication, by New York’s Lubavitcher rebbe, Kogan thought the occasion important for the well-being of Russian Jewry.

The funeral of Ilya Krichevsky and the other two victims of the failed coup in the Soviet Union 20 years ago became an important public event in the shaping of Russia’s post-Soviet identity. The presence of a Jew among the victims seemed to many at the time like the visible proof of Jews’ willingness to participate in the defense of Russia’s nascent democracy.

An additional unexpected outcome of Krichevsky’s funeral was the beginning of a realignment of the relation between the government and Russia’s Jews. Primarily an ethnic and secular rather than religious group in the Soviet period, the Jews were now beginning to be understood as a community marked by religious difference — not necessarily the most apt approach to a population that for the most part is still secular. Krichevsky was perhaps a perfect illustration of assimilated Soviet Jewry whose state-mandated religious funeral projected an image of Jewishness that was alien to most Jews in the Soviet Union. Most likely, had Krichevsky’s family made funeral arrangements on their own, they wouldn’t have opted for a religious funeral at all. Kogan, whose friends call him “the people’s rabbi” because he has sought to approach Russia’s assimilated Jewish population on its terms, played a crucial role in that transitional moment by navigating among the needs of the state, the wishes of the nonobservant family of the Jewish victim of the coup and religious practice that needed to be amended.

Kogan’s contribution to Russia’s civic discourse is, however, in danger of being forgotten today. The tendencies of the all-powerful Prime Minister Vladimir Putin include questioning the usefulness of democracy in Russia altogether. It’s Putin’s authoritarianism, in fact, that makes it that much more poignant to remember today what happened 20 years ago, when people risked their lives to stop an attempt to reinstate totalitarianism in the Soviet Union, with the hope that they were creating a different, better world.

Sasha Senderovich is a Mellon Post-doctoral Fellow at the Center for the Humanities at Tufts University.