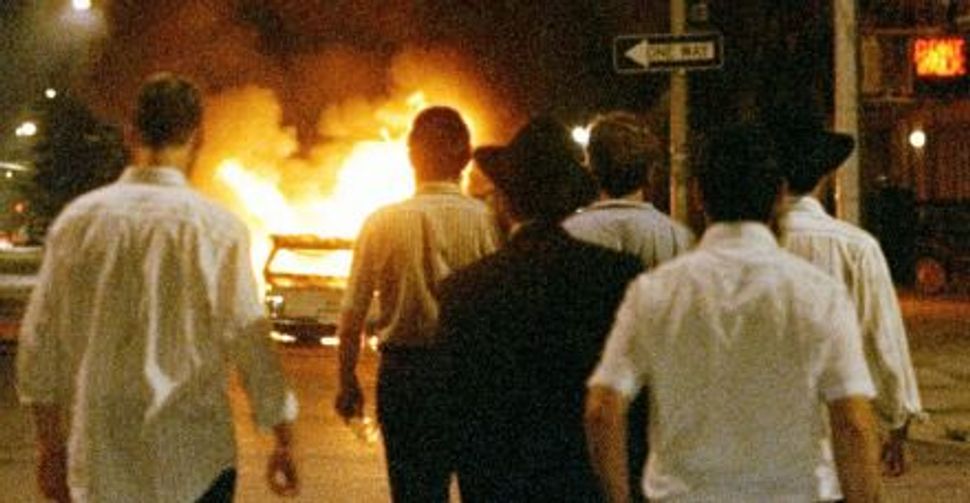 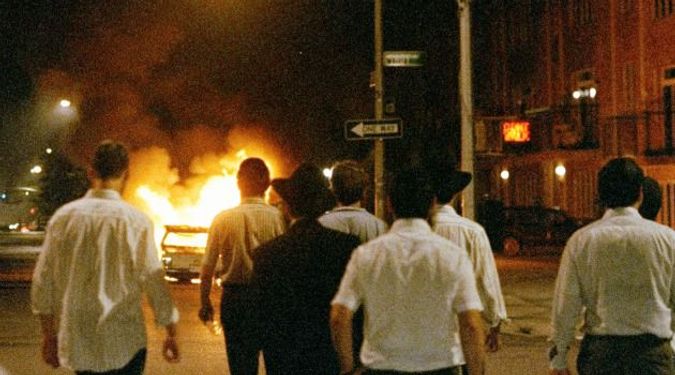 Straight Talk: The Forward dared to tell the truth about Crown Heights, while others minced their words. Image by Getty Images

‘Jewish homes were being attacked, windows broken. Jewish residents were cowering in the safest rooms of their homes. Sympathetic gentiles in the area were sneaking word to some of their Jewish neighbors to keep their lights turned off. Marauding bands of outside agitators were roaming around, blaming Jews. This was taking place not in, say, prewar Poland or the Pale of Settlement back in an even earlier time. This was taking place in the Crown Heights section of Brooklyn.”

Those were the words with which the Forward began its editorial on the Crown Heights riots. It was tapped out 20 years ago this week, on the morning of August 21, 1991. A Christian friend from Crown Heights had called my wife to tell her what was happening, and she, in turn, telephoned the printing plant on Long Island. Her phone call triggered a flurry of consultations with the Forward’s Washington-based associate editor, David Twersky, and its arts and culture editor, Jonathan Rosen. Then the paper’s front page was reopened to accommodate an editorial, which was run under the headline “Hate Grows in Brooklyn.”

With that editorial, the Forward called the violence for what it was: a pogromlike attack on the religious Jews in the city in which they’d taken refuge. It also turned out to be one of the moments in which the paper, newly emerged in English, found its voice for a new generation — all the more memorable for the fact that it came in the face of temporizing not only from such distinguished Jewish organizations as the Anti-Defamation League, but also from the dominant broadsheet, The New York Times.

Just how premeditated was the Times’ effort to portray in morally equivalent terms the attacks made on the Jews was underscored by a recent column in New York Jewish Week by one of the Times’ reporters, Ari Goldman. On this anniversary of the violence, he penned a courageous account of what it was like to be a legman amid an anti-Jewish riot for the newspaper that boasted of issuing “All the News That’s Fit To Print.” He called in the facts, and they got rewritten into a story of a racial clash between blacks and whites or between blacks and Jews, when, in reality, no Jews had attacked anybody. The riot was an attack on Jews.

This error of moral equivalency did not happen at the Forward. There, the legman in Crown Heights was Philip Gourevitch, who wrote his own stories without an ideological spin. He went on to write an important piece on Crown Heights for Commentary. Late in that August of 1991, the national director of the ADL, Abraham Foxman, issued a famous apology for the failure of his organization to call the Crown Heights violence for what it was. The one voice at the Times that was prepared to call the events a pogrom — A.M. Rosenthal, then a columnist at the paper — did so in a piece issued September 3, two weeks after the Forward’s editorial appeared on page one. Later, Max Frankel, at the time executive editor of the Times, wrote in a memoir that his staff’s liberal sensibilities had blinded it from characterizing the riots accurately as violence coming from one side.

Yet it would be wrong to suggest that the Forward was indifferent to the sentiments — a commitment to the civil rights struggle and a feeling of alienation from the most Orthodox of the Jewish communities — that no doubt had caused the Times and the ADL to hang back. This became evident two years later, when the Forward Association gathered to decide whether to recommend that its newspapers endorse Mayor David Dinkins, an African American, for re-election. This meeting produced one of the most memorable moments of my years at the Forward, later recalled in the Forward obituary for one of the great association members, Benjamin Gebiner.

Dinkins was being widely criticized by religious Jews and their allies in the city for his administration’s failure to quickly quell the riots. Yet, as this was discussed, someone stood up and said, “I am a secular Jew, and I just don’t think we should get too close to the religious.” The remark, as it was later recounted in the Forward, brought a gasp of horror. “‘What? What?’ people cried.” “We all bleed the same blood!” someone shouted. It was Gebiner who silenced the tumult. He had been born in Rovno, Ukraine. His Zionism had forced him to flee the Soviet Union. Here he’d been a founder of the Jewish Labor Committee. Gebiner, who was well over 6 feet tall, worked his 94-year-old frame into a vertical position, and the room became silent.

“Even in Poland, when they were riding their troops through the villages, the Socialist Bund sided with the religious,” Gebiner said. Then he shouted, “We sided with the religious!” Shouts went up, as it was later recounted in the Forward: “Hear ye! Bravo!” And someone leaned over and whispered: “He was there! He was there!” When the tumult died down, and the vote to endorse Dinkins for re-election was taken, the margin was so thin that when it was announced by the president of the association, William Stern, he said, “So we hope that our editors will endorse Mayor Dinkins — but not too enthusiastically.”

Seth Lipsky was the founding editor of the Forward’s English edition in 1990 and edited the paper for 10 years.