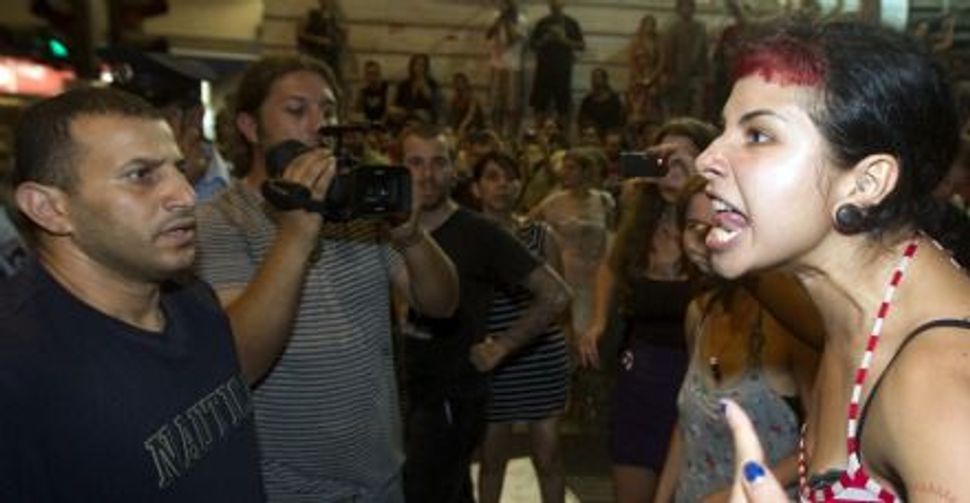 There is a man in Israel of whom you most likely have never heard, though he is among the noisiest people in the country. His name is Danny Danon. He’s 40 years old, has been in the Knesset for all of two years, yet serves as deputy speaker and chair of its Committee for Immigration, Absorption and Diaspora Affairs, as well as sitting on a plethora of other committees, including those dealing with foreign affairs and women’s and children’s issues. He is also chair of World Likud — and a close friend, so both of them say, of Glenn Beck. It was Danon who invited Beck to appear before his Knesset committee in July, and he was deeply involved in Beck’s recent three-day extravaganza in Israel that culminated at the Western Wall. Danon on Beck: “I think Glenn Beck is an example on how to deal with hasbara. Just put out the facts and do not be afraid to reveal the truth.” And he’s almost surely the only member of the Knesset with his own iPhone app.

Danon clearly thinks himself a Zionist, a patriot and a democrat. Those are inherently subjective judgments, and they are not self-evident from his behavior. He is author of the draconian new law declaring anyone who endorses a boycott of West Bank products or institutions liable for civil damages, and he recently remarked, “We [Israel] are very democratic — even too democratic. We have a strong democracy. It should be a strong democracy, but we have to set some limits.” As for patriotism, he is a vehement opponent of Prime Minister Benjamin Netanyahu’s half-hearted housing freeze, and he remains an absolute opponent of a two-state solution. In a New York Times op-ed piece on May 18, he wrote, “A United Nations vote on Palestinian statehood would give Israel an opportunity to rectify the mistake we made in 1967 by failing to annex all of the West Bank.” And, earlier this month, in an interview with Al Jazeera, he said, “There is place only for one state on the land of Israel… I do not believe in a two-state solution.”

There are doubtless some who think Danon’s bluntness charming. Not for him the veiled language of diplomacy. Thus, “Obama is zigzagging in accordance with whatever will bring him more votes and justify his Nobel Peace Prize,” or, “Israel will not pay [Obama’s] private tuition as he tries to understand the essence of the conflict,” or, “Barack Hussein Obama [has] adopted the staged plan of Yasser Arafat for Israel’s destruction, and he is trying to force it on our prime minister.” Danon’s version of Zionism, his indifference to the Israel-America relationship, his delight in Glenn Beck, and his enthusiasm for Christian Zionism cannot be thought of as anomalies. Rather, his positions reflect a gathering danger.

It is time to meet someone else you’ve most likely not heard of before, a 25 year-old Israeli woman named Daphne Leef. She represents a very different Israel from that of Danon. It was her abrupt decision to set up a tent on Rothschild Boulevard, in protest of housing costs in Tel Aviv, that led, very quickly, to the mass protests we have witnessed in recent weeks.

In Tel Aviv, protesters erected 350 tents — around the country, 500 more. What had begun as a protest about the cost of housing has long since morphed into a comprehensive “no” vote against the political echelon. Leef herself has made the transition gracefully. A friend writes, “Leef and her associates are much, much wiser than the whole governmental class. At the age of 25 – 30! Such a group has never before appeared here.”

In fact, two groups are emerging: the activist middle-class — the Rothschild cohort — and the poor, mainly Mizrachi, or Eastern Jewish, tent dwellers in what Israelis call the “peripheria,” the unexpected places, such as Bet She’an and Dimona. For now, the Mizrachim appear mostly to want, simply, a better deal from the government. Whether they can be persuaded to buy into the larger agenda remains an open question.

That “larger agenda” has captivated an older generation that had, by and large, given up on significant social change. It is as if classic Zionism has suddenly been given a shot of adrenalin. My friend writes, “What is new — and it is definitely new — is the depth of intellectual-emotional capacity of the Rothschild tent-dwellers. They definitely understand the immensity of the task of Israel’s refurbishment. I feel how their minds are embracing the whole thing. No words can adequately capture my admiration for such talents.”

So: Israel is suspended between Danon and Leef. The great test of Leef’s Israel comes on September 3, when the hope is that as many as 1 million people from all over the country will join the protest demonstration. “The people demand social justice.”

In the best of circumstances, there remains a major sorting out to be accomplished. The protesters have carefully avoided any explicit link between their disgust with the current leadership and with the occupation, although the linkage is quite clear to many of them. Nor is there any clear political path forward. But something has stirred and, by now, erupted. And if it can be sustained, even against the determined opposition of the militant settlers and the Russians, many of whom evidently equate social protest with treason, then Israel’s precipitous and dispiriting rightward turn, epitomized by Danon, may come to be seen as a snare and a delusion.