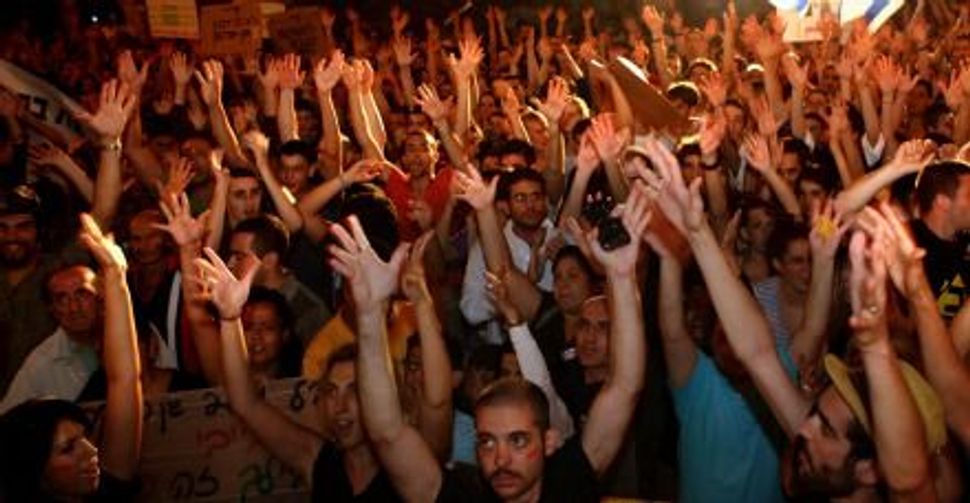 On September 3, if all goes according to plan, more than a million Israeli protesters in 50 towns and cities will take to the streets to back up their call for social and economic justice.

Not even continued violence on the border with the Gaza Strip is likely to throttle the protests or get the demonstrators to fold their tents. The media will probably focus on how the Netanyahu government will respond to their calls for renewed and inclusive social welfare policies and for an end to the crony capitalism that has enriched a tiny Israeli elite. But this protest movement has a chance to do something else: It can create a new, tangible sense that Israel’s Jewish and Arab citizens are part of a shared society, that we are all in this together.

Despite the renewed conflict between Israel and the Palestinians, the fear and suspicion that have long marked Jewish-Arab relations in Israel have begun to dissipate among many — although certainly not all — of the ordinary Israelis who have joined the protests. As an Israeli Arab and an Israeli Jew who have worked for years to foster coexistence and equality, we hope the protest organizers do whatever it takes to maintain and expand this new sense of solidarity.

Israeli Arabs’ economic situation is difficult not only because of overt discrimination, but also because there are few manufacturing jobs in Arab-populated localities. When it comes to housing, the red tape involved in getting town-planning permits hamstrings local authorities in allocating land for building. It is mainly the shortage of housing that initially brought Arabs to join the protests. At first, they melded into the demonstrations in the bigger towns. Then, slowly, they began to pitch their own protest tents in Arab towns, including Nazareth, Taybeh, Baka al-Garbiya and Sakhnin. Most significantly, some protest tents in major cities and on the periphery have been shared by Jews and Arabs to express shared goals.

For example, take the large demonstration held in Haifa in the middle of August. On the dais were representatives of both communities. Both Jews and Arabs presented the same demands: a shift in government priorities, social justice for all Israelis, education for all, public housing for all and lower electricity, water and fuel rates. There was no difference in the messages.

Another example occurred in the small, isolated town of Harish in southern Galilee. The Israeli government recently announced plans to build housing in Harish exclusively for ultra-Orthodox Jews. At the same time, the shortage of public housing in the Arab sector has prompted Arabs to look for other places to live in Harish. Together, non-Orthodox Jews and Arabs gathered in one tent and demanded that the town be open to all comers, combining the fight for social justice with advocacy for Arab-Jewish coexistence.

During the holy month of Ramadan, the committee promoting the establishment of Harish as an open town organized a break-the-fast iftar banquet for some 200 Arabs and Jews. Among the guests were the chairman of the regional council and members of Knesset. Speakers stressed that Ramadan symbolized solidarity, helping one’s neighbor and shared responsibility.

It is important to note that not a single new Arab village or town has been built by the Israeli government since 1949. Some 95% of the building in the Arab sector is private construction; only 5% is carried out by the Israeli government. In the Jewish sector, 90% of all construction is public. The protestors at Harish and other places are trying together to find a way to remedy the social injustice that affects everyone. These developments have the potential to build a true Arab-Jewish partnership in Israel.

Slowly but surely, more and more Jewish protestors who have taken to the streets are beginning to understand that social justice cannot relate only to Jews. And more and more Israeli Arabs now believe there is at least a chance that partnership with the Jews will smash the “glass ceiling” blocking their advancement and open the door to a better social and economic future.

But much more can and should be done by leaders of the current protest movement to take advantage of this historic opportunity. This movement should include more Israeli Arabs in its leadership forums. It should also demand that the government include additional Arabs in the Trajtenberg committee, the body charged with making recommendations to the government in response to the protestors’ demands.

There are currently a few organizations in Israel, such as Givat Haviva, that have grasped the potential for change and are putting the principal of coexistence between Jews and Arabs and joint social activism into practice. The protest movement now has a chance to do this on a nationwide scale and help bridge at least some of the deep chasms dividing Arabs and Jews in Israel.

Riad Kabha, former mayor of the Israeli Arab town of Barta’a, is the director of the Jewish-Arab Center for Peace at Givat Haviva. Yaniv Sagee is the emissary in North America for Givat Haviva, Hashomer Hatzair and the Kibbutz Movement.